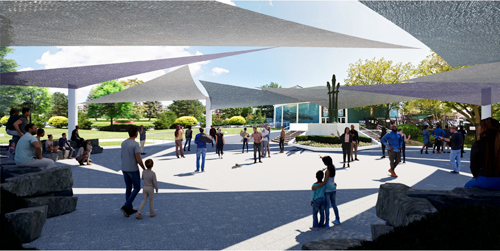 (Renderings courtesy of the Aquarium of Niagara)

On Tuesday, the Host Communities Standing Committee (HCSC), which administers and oversees projects financed by the Niagara River Greenway, voted to award funding for a veterans memorial in Wheatfield and a new plaza in front of the Aquarium of Niagara.

The veterans memorial project is set to receive $100,000 as it moves from its current location at the Town Highway Department Garage on Ward Road, to a new site located adjacent to the Town Hall. The funds will aid in the construction of a 7,800-square-foot paved walkway and display area for the town’s recently restored Huey helicopter, tank and veterans memorial monument. The new location also provides ample parking, ADA compliance and restroom facilities, along with increased security and police presence due to its location near the Town Hall/courthouse.

In November, the Greenway Commission ruled the project inconsistent with its goals because it lacks a connection to the river. However, project coordinators demonstrated the site will eventually link to the Wheatfield section of the Shoreline Trail segment, which is set to be constructed in 2023, as well as the Niagara River Greenway trail system. Additionally, the Wheatfield Town board is set to sign a resolution next week committing to the creation of a connecting lane/trail to be constructed from the state bike route on Niagara Falls Boulevard.

Lou Paonessa, representing the New York Power Authority, explained the reversal noting, “(The commission) offered suggestions on ways to make the project more of a Greenway project and we see that they're being addressed by the county, by the Town of Wheatfield and by the applicant ... so we have a little more comfort today than we did back in November.”

The Aquarium of Niagara was also awarded $250,000 in funding toward a new plaza project dubbed "Whirlpool Commons." Executive Director Gary Siddall explained that, with the removal of the Niagara Scenic Parkway, the venue is looking to utilize and capitalize on its newfound access to the Niagara Falls State Park and Niagara Gorge areas. The object is to transform the newly created plaza space in front of the aquarium into an outdoor destination.

“We see this as a tremendous opportunity for enhanced educational programming, outdoor opportunities to further our conservation priorities, and all those things kind of come together to become the primary objective of our completed project,” Siddall said.

Siddall said the aquarium was planning an “aggressive” construction timeline with the intent on completing this project ahead of the upcoming summer season. 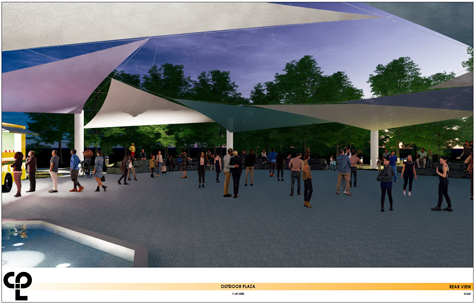 (Renderings courtesy of the Aquarium of Niagara)

The Aquarium of Niagara provided additional information in a press release:

Whirlpool Commons will create a lively hub for tourists and neighbors while taking advantage of the new trails created after the removal of the Niagara Scenic Parkway. Features will provide leisure space for visitors complete with shade structures and tiered seating designed to echo the landscape of the greater Niagara Gorge.

The project advances the missions of both the aquarium and the Niagara River Greenway Commission by connecting local environmental spaces and offering a new outdoor attraction that is rife with collaborative opportunities. The completed project will prioritize enhanced educational programming to further the venue’s conservation priorities.

“We are excited to partner with the Aquarium of Niagara on their plaza development, which is positioned at the head of our spectacular new Gorgeview Shoreline Trail segment heading north and connecting City of Niagara Falls and New York State Parks to Gorge attractions,” said Greg Stevens, executive director of the Niagara River Greenway Commission. "It will be exciting to see how this project will launch the aquarium into more outdoor ecological education for our youth."

“I’m proud to congratulate the Aquarium of Niagara on their continued efforts to grow as an attraction here in the City of Niagara Falls, drawing both residents and visitors alike with their latest and greatest exhibits,” Niagara Falls Mayor Robert Restaino said. “This new outdoor opportunity will add yet another way to connect visitors of the Falls to the aquarium, while also providing yet another unique outdoor space for events and visitors of the aquarium. I am excited for the city to be a part of their continued efforts to update and innovate the aquariums exhibits as we move into 2021 and the future.”

The addition of Whirlpool Commons advances the Aquarium of Niagara’s newly created strategic plan, which strives to enhance the guest experience and encourages the community to embrace the venue as a place where they can interact with educational programming and conservation initiatives and become inspired to make a difference for aquatic life.

The Aquarium of Niagara is embracing an aggressive timeline and hopes to begin construction immediately. Clark Patterson Lee has been designated as the project designer.

Michael Mistriner, vice president of Clark Patterson Lee’s Buffalo office, said, “This project is a natural extension of the aquarium to further integrate into the greenspace development along the rim of the gorge.”

Project completion is expected by this summer.