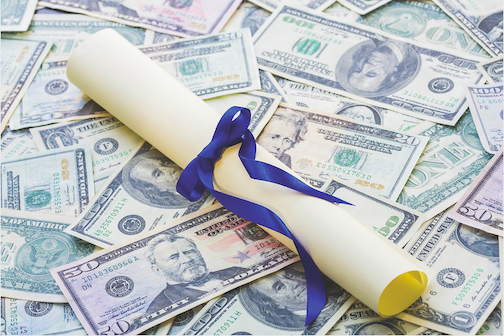 Schumer among those pushing plan to immediately cancel up to $50,000 in student loan debt per student

Standing with congressmen-elect Jamaal Bowman, Mondaire Jones and Ritchie Torres, as well as local students, U.S. Sen. Charles Schumer pushed his plan this week to cancel up to $50,000 in debt for federal student loan borrowers. Schumer and the rep-elects explained why this matters so much to borrowers across New York and how a plan like this can be made real.

Schumer and colleagues explained President-elect Joe Biden can use existing executive authority under the Higher Education Act to substantially cancel student loan debt for students across New York. Schumer, Bowman, Jones and Torres said addressing the student loan crisis will be one of the first legislative actions they will prioritize in the new 117th Congress in January 2021.

“Millions of young Americans, including so many New Yorkers we represent – and their families – have been crushed by student loan debt, greatly impeding their ability to begin careers and build the financial resources needed to rent apartments, buy homes, start families or just simply build their futures,” Schumer said. “Even worse, the debt load average across New York is actually higher than it is across the country, and this holds down our entire local economy, which we cannot afford to suppress after dealing with the financial devastation of COVID. That is why I am joined here with these newly elected members of Congress to announce that we will prioritize student debt forgiveness in 2021, bringing immediate relief to millions of New Yorkers, including those here in the city.”

Schumer explained how President Biden, once sworn into office, can use existing executive authority under the Higher Education Act to substantially cancel student loan debt for students across New York. Schumer said that immediate student debt relief through executive authority would provide a robust injection of COVID-19 relief to individuals struggling through the economic recession. Democrats in Congress prioritized student debt relief in the HEROES Act legislation that has been blocked by Senate Republicans for months, highlighting the need for new executive action.

“It’s flat-out wrong that people in this country hold more than $1.6 trillion in student debt,” Bowman said. “But the Biden administration has the power to do something about that, and can act even if Republicans in the Senate choose to ignore the problem. Forgiving $50,000 in student debt will change young people’s lives, particularly for Black young people, who hold far more student loan debt than their white peers. It’s the right thing to do, and I urge the Biden administration to act."

"For every generation before mine, education has offered young people a ticket to the American Dream. Unfortunately, that dream has not materialized for the youth of today, especially in Black and brown communities,” Jones said. “Wages have remained stagnant for decades as the costs of higher education, and of living generally, have skyrocketed. Forgiving student debt would liberate millions of Americans to participate meaningfully in our economy through home ownership and entrepreneurship, and it would be a critical step toward racial, generational and economic justice.”

Torres said, “The burden of student loan debt threatens to stifle the ambitions of a generation and our national economy. With executive action, President-elect Biden can cancel student loan debt and ensure that a generation of leaders are able to achieve their dreams. I’m proud to partner with Sen. Schumer and my colleagues, congressmen-elect Bowman and Jones, to make student loan debt cancellation our first priority in the new Congress.”

Schumer added, “The bottom line is that the cost of college is out of control and paying for it forces countless students and families to take on crippling debt, which greatly impedes one’s ability to get started and succeed after graduation. It is like starting a long walk with a backpack stuffed with bricks, and so, this plan to cancel student debt on federal loans will substantially lighten that load and give recent graduates a huge boost that will launch them into a much brighter future.”

New York is home to more than 300 public and private colleges and universities, serving approximately 1.2 million students. While 42% of college students in New York graduate without student loan debt, 58% graduate with debt. Recent data (prior to the COVID-19 pandemic) from the Federal Reserve Bank of New York showed New York’s average student loan balance was $34,600. The average New York City resident has more than $38,000 in student loans. Both numbers are larger than the national average of $32,700. Graduates burdened with student loan debts often have no choice but to postpone decisions like buying a home or car and starting a family, and are forced to put their lives on hold for upward of a decade.

Schumer explained Black and Latinx students are more likely to borrow money to go to college, borrow more money while they are in college, and have a harder time paying when they leave college. A third of Latinx borrowers default on their loans, and Black borrowers have about a 50-50 chance of defaulting on their loans. In fact, a decade after they start school, the typical Black borrower owes more on their loan than they originally borrowed. For millions of Black and brown communities, student debt is now just another gigantic roadblock between them building real wealth.

He explained student debt cancellation, like the kind he is pushing, can provide immediate relief to millions who are struggling during this pandemic and recession, and give a boost to the struggling economy through a consumer-driven economic stimulus that can result in greater home-buying rates and housing stability, higher college completion rates, and greater small business formation. This could be especially good news for the nearly 2.4 million New Yorkers with outstanding student loans and a cumulative debt of $89.5 billion as of March, according to studentaid.gov.