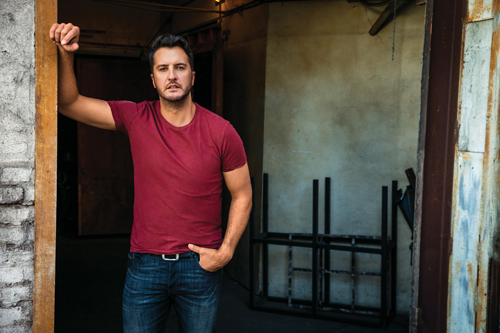 Luke Bryan ("Down To One" photo by Jim Wright, provided by Schmidt Relations)

Four-time Entertainer of the Year and “American Idol” judge Luke Bryan reigns as Billboard’s “Top Country Artist of the 2010s” as announced by the magazine last week. Based on the publication’s charts, Bryan ranks at the top by placing 11 No. 1s on the weekly Hot Country Songs chart and nine No. 1s on the Top Country Albums chart during the past decade.

Bryan began 2020 with his annual “Crash My Playa” destination concert event weekend in Mexico in January. That was followed by the launch of his Two Lane American Golden Lager beer this spring, both prior to the pandemic. But 2020’s first big challenge came as the “American Idol” season was already under way. After extensive consideration for the health and safety of everyone involved in the show, “Idol” continued virtually through its season finale in May from the homes of the hosts, judges and contestants. Filming for the 2021 season began this August and has also seen production adaptations due to COVID-19.

Bryan’s originally planned 2020 “Proud To Be Right Here” Tour was pushed into 2021, and his “Born Here Live Here Die Here” album release moved from April to August this year. The project was released through a wide variety of virtual media appearances and television performances, beginning with Bryan’s first pre-taped performance for “The Tonight Show with Jimmy Fallon” in early summer. Bryan performed “Build Me A Daddy.”

Bryan also appeared on “Jimmy Kimmel Live!” at the request of friend, Jason Derulo, who was guest hosting the show this summer. On “Good Morning America,” Bryan surprised a young coach – and fan – telling this person he would not lose his job due to cutbacks caused by the pandemic as funding was raised for his mentoring/coaching program. Bryan also launched his own Apple radio station this year, Party Barn Radio.

Additional performances in 2020 included the ACM Awards and the CMT Awards, where Bryan took home the trophy for “One Margarita” as the Male Artist of the Year video. The song has more garnered than 244 million streams and the video has seen nearly 27 million views on YouTube.

In November, Bryan was a part of the Doobie Brothers Rock & Roll Hall of Fame Induction. He was again part of ABC’s CMA Awards special, “Country Strong 2020: Countdown To The CMA Awards,” as Robin Roberts presented a look at the year that changed the country and the country music community.

Since his debut in 2009, Bryan has released 25 No. 1 hits and has more RIAA certified digital singles than any other country artist with 54.5 million. He has also tallied 13.8 billion streams, 12.5 million albums sold, four Platinum albums, two four-times-Platinum albums, seven RIAA certified albums, 22 Platinum singles and 12 multi-Platinum singles. At the close of last year, Bryan was named as the first recipient of the ACM Album of the Decade Award for “Crash My Party” and was the named the Most Heard Artist of the Decade by Country Aircheck.

Bryan’s seven headline concert tours have played for 12 million fans, with 36 stadium concerts, 11 Farm Tours, six years of spring break shows and six sold-out “Crash My Playa” concert events. He was recognized as a CMT Artist of the Year six consecutive times, was twice named the Entertainer of the Year by both the Academy of Country Music and the Country Music Association, and was honored as a NSAI Artist/Songwriter of the Year. In total, Bryan has won more than 40 music awards, including six from the ACM, seven CMT Music Awards, five Billboard Music Awards, four American Music Awards, two CMA awards, an iHeart and a Teen Choice award.