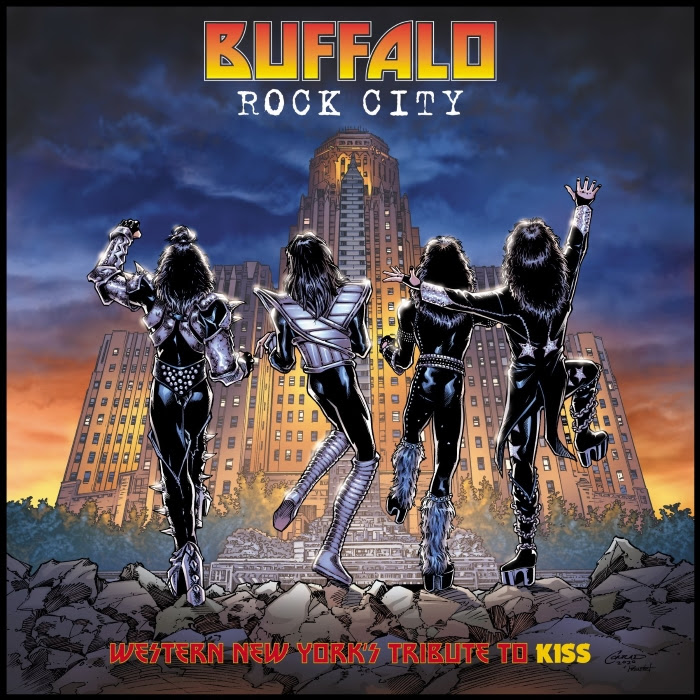 "Buffalo Rock City" will release Dec. 15 on CD, all digital stores and streaming media. The recording’s proceeds are geared to help the Compass House Foundation, a charitable organization that helps homeless youth in Buffalo.

Lifelong KISS fan and tribute band KISS THIS! founder and guitarist John Jeffrey assembled the album. He said it was important to have a quality, KISS-related release that represented the Western New York music scene.

Collaborating locally and via remote locations, "Buffalo Rock City" was carefully recorded, to ensure the final product would sound like a complete album of work. To create a solid foundation, all the drum and bed tracks were recorded in the same studio on the same day.

Being that "Buffalo Rock City" serves a greater purpose, it was decided the songs would, generally, elevate those in need.

Jeffrey said, “While KISS is famous for their tongue-in-cheek innuendo, it made sense to record songs which resonate with the struggles some people may experience, and interpersonal things most people may struggle with, day to day.”

The album presents hits and B-sides from KISS’ history as a recording band. This includes songs from the band’s 1974 self-titled debut, all the way up to the last (so far!) KISS studio album, 2012’s "Monster." The tribute album features remakes of songs that were first sung by all four original members of KISS (Gene Simmons, Paul Stanley, Ace Frehley and Peter Criss). It includes songs originally played by all members of the group: all five lead guitarists (Frehley, Vinnie Vincent, Mark St. John, Bruce Kulick and Tommy Thayer) and the focal drummers from the band’s studio recordings: Criss, Eric Carr, Eric Singer and Anton Fig.

Weissman's lead vocals in his “While The City Sleeps” marks a significant note in "KISStory." His song originally appeared on KISS' 1984 release, "Animalize." This is the first time a KISS co-writer re-recorded a new studio version of a KISS song that he wrote with the band.

Another legend in KISS recording lore is Jay Messina, who mastered “Buffalo Rock City.” He has been working with KISS since 1976, engineering and mixing the band's breakout album "Destroyer." He engineered and mixed 1979’s "Dynasty" and co-mixed the next album, "Unmasked" (1980).

Jeffrey said, “Jay Messina knows what a KISS album should sound like; he did an amazing job in the mastering process of ‘Buffalo Rock City.’ "

In tradition with the great KISS album covers, comic artist Kevin Conrad did the pencils and inks for the front cover of “Buffalo Rock City.” A life-long KISS fan, Conrad is known for his work with Todd McFarlane, who hired him to ink all 31 issues of his "KISS – Psycho Circus" comic book series. The cover art depicts KISS THIS! musicians wearing their favorite era costumes for the KISS member they personify. The band follows the iconic KISS "Destroyer" poses in front of Buffalo's City Hall.

The Compass House Foundation is the charity recipient of proceeds of “Buffalo Rock City." Located in Buffalo, its mission is to provide runaway, homeless and street youth with safe shelter and services, in an environment that supports dignity, respect and self-reliance.

The release is available for preorder. Information is at www.BuffaloRockCity.com and www.compasshouse.org, while more details can be found on social media pages for Buffalo Rock City – KISS Tribute Album (facebook.com/WNYTribute2KISS) and KISS THIS! www.facebook.com/SpaceAceBuffalo.