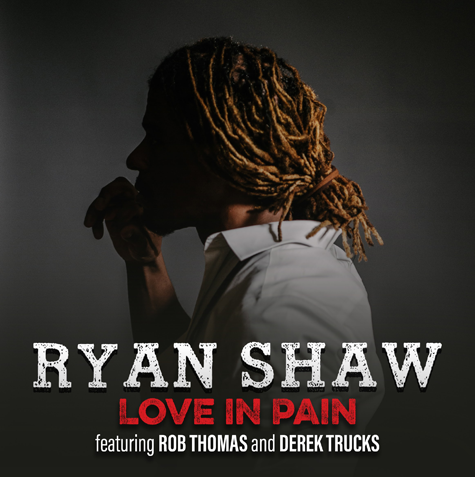 The next single from multi-Grammy-nominated vocal powerhouse Ryan Shaw’s forthcoming album, “Imagining Marvin,” will be a duet with Grammy Award-winning singer/songwriter and pop superstar Rob Thomas (Matchbox Twenty). “Love In Pain” is co-written by Shaw, Thomas and Derek Fuhrmann. Thomas and Shaw are both signed to Round Hill Music for publishing, with Thomas just joining that roster. “Love In Pain” is the result of their first writing session together.

In addition to Thomas, “Imagining Marvin” also features a stellar array of guests. Joining Shaw on the album are guitar legends Robert Randolph and Derek Trucks, who each have been honored with multiple Grammy nominations (10 collectively for Randolph and seven collectively for Trucks). Trucks has garnered three Grammy Award wins. Lending their respective unique playing styles to the mix, Trucks can be heard on “Love In Pain,” while Randolph is featured on another Shaw original “Get Home.” Also appearing on the album is Broadway star and recording artist Shoshana Bean, known for starring turns in “Waitress” and “Wicked.” Bean duets with Shaw on the classic Marvin Gaye/Tammi Terrell duet, “Good Lovin’ Ain’t Easy To Come By,” written by Valerie Simpson and Nick Ashford. The tracks on the album are a combination of Shaw’s renditions of some of Gaye’s best-loved hits as well as original material.

Of the album’s guests, Shaw commented, “ ‘I get by with a little help from my friends’ are the words that come to mind when I think about all the guests on this new record. They are all connected to me in a special way. Robert Randolph and the Family Band was the first tour I did when I signed to Columbia Records back in 2006. Robert is a masterful musician and has a great heart. Derek Trucks was the third and fifth tour I did in those days … he is also a master at his craft; we hit it off right away. He invited me back on stage to jam with his band after I did my set. It created some of my most memorable nights of performing live. To now have him on this record is humbling and nostalgic for me.

“What can I say about Shoshana Bean? Whatever is said about her usually follows the words ‘amazing’ or ‘beast,’ which would make everything after that true. Shoshana and I have been talking about collaborating for years now and it’s finally here. I couldn’t be more happy. And my new good friend, Rob Thomas, is the best at what he does in both performance and writing. He is a brilliant collaborator, as he absorbs music and comes back with many variations of an idea so you never feel trapped or gridlocked or at a dead end during the session. I’m thankful that Rob not only lent his pen, but his voice to this project. As I said, ‘I get by with a little help from my friends.’ ”

In other news, Shaw is confirmed to appear in a special livestream performance event, “Live From Daryl’s House Club,” on Wednesday, Dec. 2, just days following the release of “Imagining Marvin.” “Live From Daryl’s House Club” stems from the iconic concert series hosted by pop legend Daryl Hall (one half of Hall & Oates). For ticketing and more information, click here.

“Imagining Marvin” is set for a Nov. 27 release via Shaw’s own FORM (Fans Of Real Music) Records and Broadway Records. Inspired by one of Shaw’s idols, Marvin Gaye, “Imagining Marvin” is the powerful new project that originally premiered live in New York City in 2019 to a sold-out crowd. Showcasing Shaw’s soaring and impassioned vocals, the album features numerous Gaye hits alongside five of Shaw’s original songs; the latter inspired by Gaye’s legacy. Click here to preorder the album.

The first single from the album recently had its worldwide premiere via Soul Tracks. “Strong Men Can” is co-written by Shaw and iconic songwriter Valerie Simpson (who with her late husband/partner, Nick Ashford, is responsible for some of Gaye’s biggest hits; Gaye is the inspiration behind “Imagining Marvin”). The heartfelt ballad encourages emotional vulnerability in men and supports good mental health via such expression. “Strong Men Can” can be purchased here.

Shaw is a three-time Grammy-nominated artist. He recently appeared as Judas at the Lyric Opera of Chicago in the U.S. premiere of the critically acclaimed London/Regent’s Park’s production of “Jesus Christ Superstar,” which won the Olivier for Best Musical Revival. He starred as the original Stevie Wonder in “Motown: The Musical on Broadway,” and on London’s West End as the soul of Michael Jackson in “Thriller Live.” As a recording artist, Shaw has released three solo Grammy-nominated projects to date: 2008’s “This Is Ryan Shaw,” 2011’s “It Gets Better,” and 2014’s “Real Love.” He has toured the world and shared the stage with such artists as Van Halen, Bonnie Raitt, Joss Stone, John Legend, B.B. King, Bruce Hornsby and Jill Scott, to name a few. On television, Shaw has been a guest artist on “The Ellen DeGeneres Show,” “Ellen’s Really Big Show,” “Last Call with Carson Daly and “The Martha Stewart Show.” His music has been featured in television on FOX’s “So You Think You Can Dance” and ABC’s “Dancing with The Stars,” “Grey’s Anatomy” and “Lincoln Heights,” as well as in films “My Blueberry Nights” and “Bride Wars,” and the “Sex and the City” soundtrack.