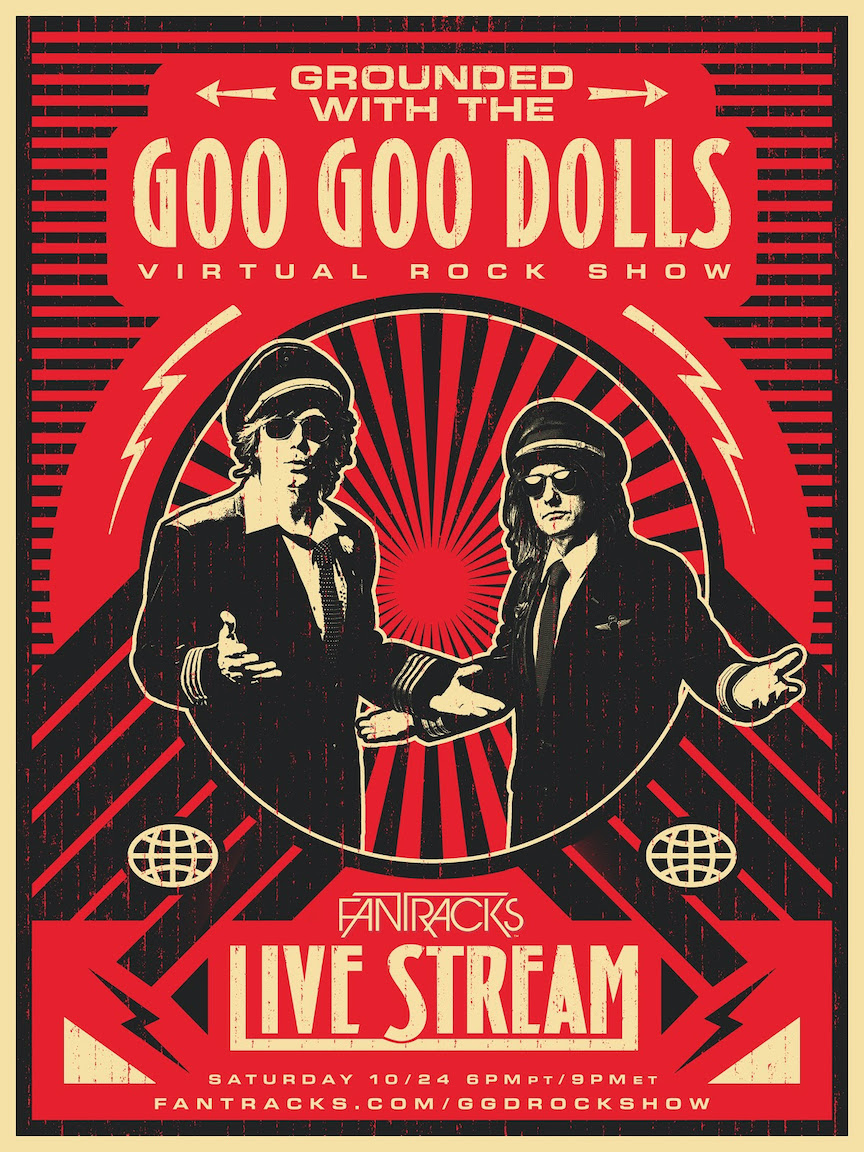 Today, multi-Platinum, four-time Grammy-nominated rock band Goo Goo Dolls announced an immersive livestream concert in partnership with the live-streaming music platform FanTracks. Set for Saturday, Oct. 24 (9 p.m. ET), the band will deliver a completely live performance in full-scale production featuring hits from across their iconic catalog. Fans from around the world will also have access to multi-camera viewing and the ability to visit a virtual merch booth and purchase meet-and-greet and VIP packages for the show, giving them the complete experience of a rock concert from the comfort of their own home.

Barry Summers, president/executive producer of FanTracks, said, "Everyone knows that the Goo Goo Dolls are one of the best live bands ever. In a time when fans are unable to see and participate in live music, this partnership represents the best of what can happen when groundbreaking technology meets accomplished talent."

This concert will be followed in December by "It's Christmas All Over," the first augmented reality movie musical, produced and directed by Summers. Goo Goo Dolls will play songs from their forthcoming holiday record, “It's Christmas All Over.” Stay tuned for more details in the coming weeks.

Created during lockdown this year and produced by frontman John Rzeznik alongside the band's frequent collaborators Brad Fernquist and Jimmy McGorman, “It's Christmas All Over” arrives Oct. 30 via Warner Records and boasts a diverse collection of songs that capture the warmth and spirit of classic Christmas music. In addition to cover renditions of tracks such as "Let It Snow" and "Hark! The Herald Angels Sing," the project will feature several rarities, a jazz-infused medley finale and two brand-new original holiday songs, including the debut single "This is Christmas."

Preorders for “It's Christmas All Over” are available now here, as well as exclusive merch offers including a red vinyl LP, a Goo Goo Dolls Crosley record player and additional limited edition items for the holidays.

“It's Christmas All Over” arrives on the heels of the deluxe edition release of the band's acclaimed 12th studio record “Miracle Pill.” The special iteration features a trio of brand-new tracks ("Just A Man", "The Right Track" and "Tonight, Together"), as well as the title hit "Miracle Pill”; the haunting slow-burn "Autumn Leaves"; and the band's latest single, "Fearless."

With over 30 years together as a group, over 12 million albums sold, and 14 No. 1 and Top 10 hits at Hot AC, Goo Goo Dolls remain at the top of their game and in a league of their own among rock bands.

Formed in Buffalo during 1986 by Rzeznik and Robby Takac, Goo Goo Dolls quietly broke records, contributed a string of staples to the American songbook, connected to millions of fans, and indelibly impacted popular music for three-plus decades.

Beyond selling 12 million records worldwide, the group has garnered four Grammy Award nominations. Among a string of hits, "Iris" clutched No. 1 on the Hot 100 for 18 straight weeks and would be named "#1 Top 40 Song of the Last 20 Years." Thus far, “A Boy Named Goo” (1995) is double-Platinum, while “Dizzy Up The Girl” is quadruple-Platinum, and “Gutterflower” (2002) and “Let Love In” (2006) are Gold. “Something for the Rest of Us” (2010) and “Magnetic” (2013) bowed in the Top 10 of the Billboard Top 200. 2016's “Boxes” attracted the praise of People and Huffington Post as Noisey, Consequence of Sound, and others featured them. The band’s music has been covered by everyone from Taylor Swift to Leona Lewis. Among many accolades, Rzeznik received the prestigious "Hal David Starlight Award" in 2008.