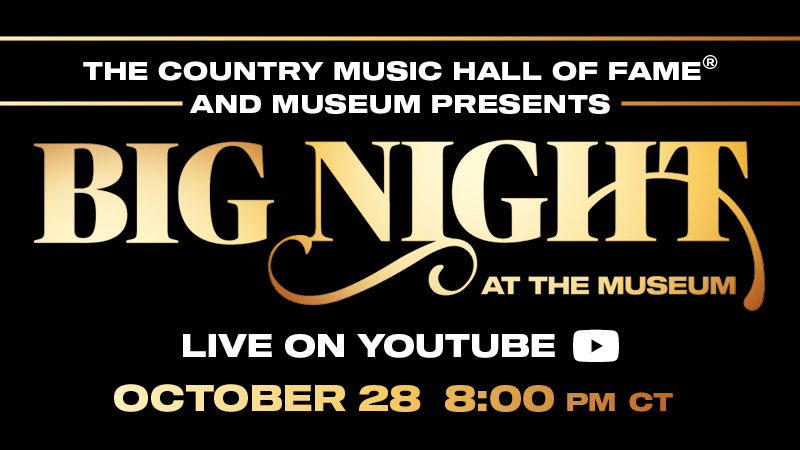 Image courtesy of the Country Music Hall of Fame.

The Country Music Hall of Fame and Museum has revealed the pairings of musicians and historic instruments to be played and the legendary artists to whom tribute will be paid during the museum’s upcoming fundraiser, “BIG NIGHT (At the Museum).” The venue also announced Brad Paisley, Dan Tyminski and Lucinda Williams have been added to the lineup for the event, which premieres at 9 p.m. ET on Wednesday, Oct. 28, exclusively on the museum’s official YouTube channel.

The pandemic created a unique set of circumstances that allowed museum staff to safely remove historic instruments from exhibit cases and be played. For “BIG NIGHT (At the Museum),” instruments, artists and songs were carefully matched to highlight personal and artistic connections. These include:

Stuart will host “BIG NIGHT (At the Museum),” with audio supervision by Dave Cobb.

“BIG NIGHT (At the Museum)” will present performances captured in the museum’s galleries and performance venues while the museum was closed. It will generate support for the museum and its work with exhibitions, collections preservation and educational programming.

A closure of nearly six months due to COVID-19 caused significant loss of revenue for the museum, which was forced to cancel in-person educational events. During the program, viewers will be encouraged to donate to the museum through YouTube Giving.

More information can be found at www.CountryMusicHallofFame.org.