•The Buffalo Sabres on Saturday announced the team signed defenseman Brandon Montour to a one-year contract with an average annual value of $3.85 million.

Since making his Sabres debut on Feb. 26, 2019, Montour leads all Sabres defensemen with eight goals and a plus-9 rating. He ranks third among the team’s blueliners in points (28) and second in average ice time (20:07) in that time frame.

Montour was named to the AHL’s First All-Star Team after leading the league in assists by a defenseman and by a rookie in 2015-16. He also played in the 2016 and 2017 AHL All-Star Classics.

He captured a silver medal with Team Canada at the 2019 IIHF World Championship in Slovakia.

•Forward Zemgus Girgensons to a three-year contract with an AAV of $2.2 million.

Girgensons ranks 32nd on the franchise’s all-time games played list and has totaled seven shorthanded goals in seven seasons with the Sabres, tying for 15th-most in franchise history.

•Defenseman Brandon Davidson to a one-year contract with an AAV of $700,000.

He led all Stockton defensemen in points per game (.59) last season (minimum five games played) while setting an AHL career high with 20 points (3/17) in 34 games.

Davidson tied his NHL career highs in games played (51) and goals (4) between the Montreal Canadiens, Edmonton Oilers and New York Islanders during the 2017-18 season.

He was named to the WHL (East) Second All-Star Team in 2012 after a 49-point campaign as the captain of the Regina Pats in his last junior season.

He has posted four points (1/3) in 47 career playoff games for San Jose and Nashville, and played in all 22 of Nashville’s postseason contests during their 2017 Stanley Cup Final run.

Irwin has a career shot attempts percentage of 51.3% and has never finished a full NHL season below 50.1%.

He has played 434 games through seven NHL seasons with the Calgary Flames, Edmonton Oilers, Los Angeles Kings and Arizona Coyotes.

Rieder recorded five points (3/2) in 10 playoff contests in 2020 with the Flames, tying an NHL postseason record with three shorthanded goals.

He has represented Germany in seven major international competitions, including four appearances at the IIHF World Championship. He was also a member of the Ralph Krueger-coached Team Europe at the 2016 World Cup of Hockey.

On Wednesday, the team tendered a qualifying offer to the following restricted free agents:

•The Sabres also signed goaltender Jonas Johansson to a one-year contract with an AAV of $700,000.

He played a career-high 22 games for the Rochester Americans in his fourth AHL season in 2019-20, and ranked sixth in the AHL in goals-against average and seventh in save percentage.

He made his NHL debut on Feb. 4 vs. Colorado and earned his first career win on Feb. 23 vs. Winnipeg.

•And, the team signed forward Tage Thompson to a three-year contract with an AAV of $1.4 million.

He sustained a season-ending injury in his first NHL game of the 2019-20 season. Prior to that, Thompson was tied for the Rochester Americans’ team lead with 12 points (6/6) and ranked second in the AHL with 67 shots at the time of his recall.

Thompson helped the United States to a gold medal at the 2017 IIHF World Junior Championship and captured a bronze medal in his debut with the country’s senior national team at the 2018 IIHF World Championship in Denmark. 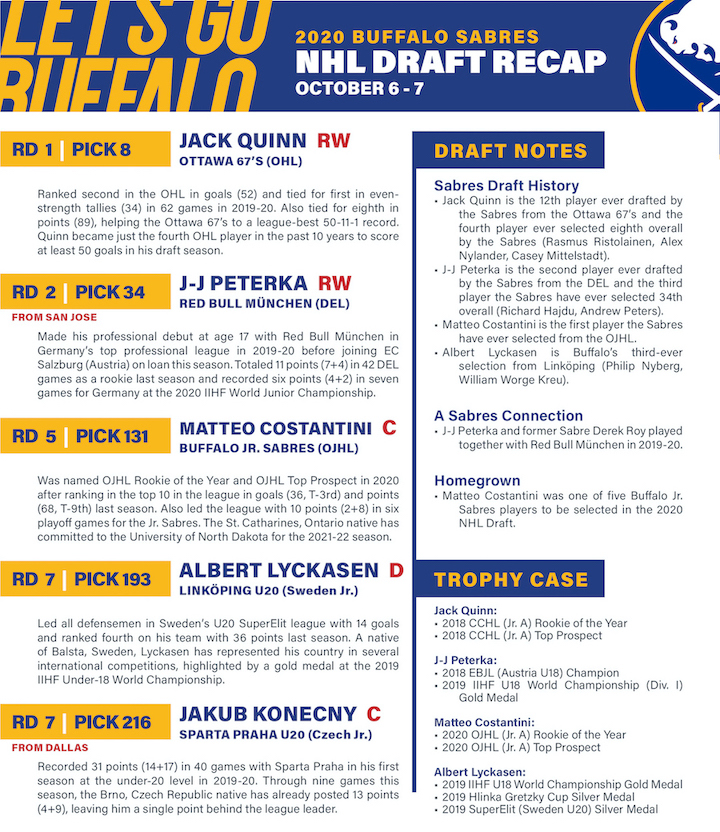 •Buffalo wasn’t finished. On Sunday, the Sabres announced the signing of forward Cody Eakin to a two-year contract with an AAV of $2.25 million.

Has amassed 19 points (8/11) in 50 career playoff games and dressed for every game in the Golden Knights’ 2018 run to the Stanley Cup Final.

Eakin won championships in the AHL and WHL, and recorded six points (4/2) in nine games to help Canada win gold at the 2015 IIHF World Championship.

•Later that day, the team announced it signed forward Taylor Hall to a one-year contract with an AAV of $8 million. He is expected to play alongside center Jack Eichel on the Sabres’ top line.

Hall’s 1.05 points per game in the past three seasons ranks 17th in the NHL. He won the Hart Trophy in 2018 after leading the New Jersey Devils to the playoffs with career-high totals in goals (39), assists (54) and points (93).

Hall has been selected to three NHL All-Star Games in his career. He won back-to-back gold medals with Team Canada at the 2015 and 2016 IIHF World Championships. Has recorded 24 points (15/9) in 28 total games for Canada’s senior national team.

Needless to say, it’s been a busy fall for the blue and gold.

He ranks in the top 10 among active NHL players in career regular-season games played (seventh), goals (sixth) and points (eighth).

Staal ranked third among Wild skaters in goals (19) and points (47) in 2019-20, tying for the team lead with 14 even-strength goals and earning his sixth career NHL All-Star Game selection.

He is one of six active NHL members of the Triple Gold Club, winning the 2006 Stanley Cup and gold medals with Canada at 2007 IIHF World Championship and 2010 Winter Olympics. Staal helped lead the Carolina Hurricanes to a Stanley Cup championship with an NHL-best 28 points (9 goals, 19 assists) in the 2006 NHL Playoffs. He played in six NHL All-Star Games and was selected as the All-Star Game MVP in 2008.

•The following week, Buffalo announced it signed forward Curtis Lazar to a two-year contract with an AAV of $800,000.

He made his Sabres debut in 2019-20, setting career-high marks in faceoff percentage and goals per game and tying his career high in points per game.

He won two WHL Championships and a Memorial Cup as a member of the Edmonton Oil Kings before captaining Team Canada to a gold medal at the 2015 IIHF World Junior Championship, where he tied for the tournament lead in goals.