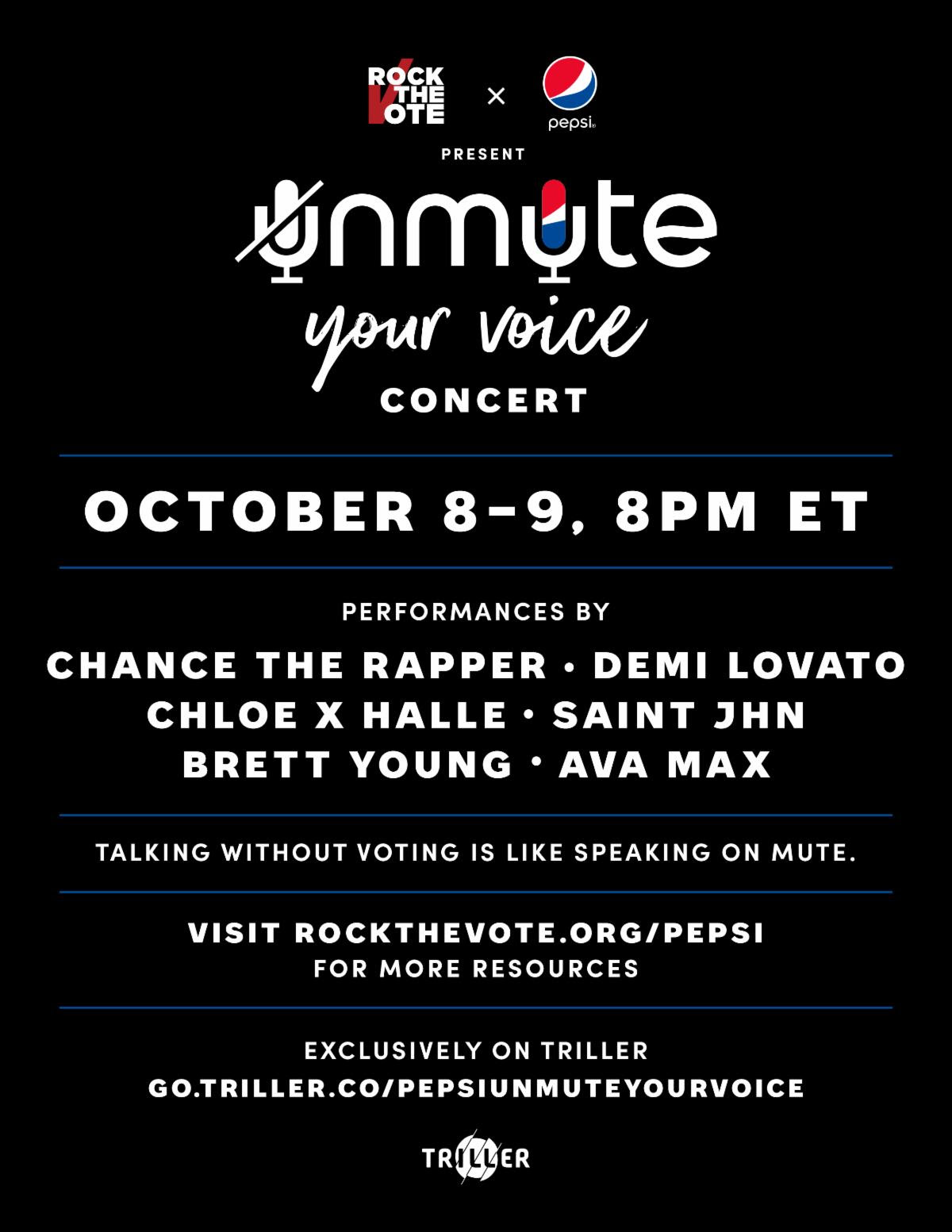 Image courtesy of The Press House

Pepsi, Rock the Vote partner for 'Unmute Your Voice'

Pepsi is leveraging its “Unmute Your Voice” platform in partnership with Rock the Vote to curate an epic concert experience through Triller, an emergent app customizing its platform to serve as the two night event’s venue.

Rebuilding the Triller experience on the fly for brand partners to bring to life their activation, Rock the Vote and Pepsi’s “Unmute Your Voice” event will showcase performances from Chance the Rapper, Demi Lovato, Brett Young, SAINt JHN, Ava Max and Chloe x Halle this Thursday and Friday, Oct. 8-9, at 8 p.m. ET each night.

The concert, featuring some of the biggest names and rising stars in the music industry, isn’t just about the music experience, but rather exploring the power of the individual vote, encouraging fans to learn more about voting and voter registration with an in-app prompt. In acknowledging one of the prompts, the concert experience will be unlocked, a reward for fans who acknowledge the opportunity to unmute their voice this year.

In an update slated for early October, Triller is leveraging its platform for brand engagement to create a specific, curated fan experience with Pepsi’s “Unmute Your Voice” and Rock the Vote. Triller completely reconfigured an in-app interstitial/commerce button that allows users to physically access the fully immersive concert experience for the first time ever on the platform. With the entirely brand-new build, the commerce button will now be colored Pepsi blue and titled “Unmute” – and for the first time, users will also be able to watch the full concert on the app without creating a Triller profile.

Triller is an American video-sharing social network and entertainment platform with millions of users engaged in creating and consuming content, entertainment and music. With 44% of the user base aged 18-24, it is a platform to engage music and culture fans, especially for Pepsi and Rock the Vote in an effort to engage a demographic that has traditionally seen the lowest turnout during elections. According to Generation Progress, less than 40% of eligible 18-24-year-olds voted in 2016, and barely 20% voted in the 2018 midterms – both lowest amongst all age brackets.

The concert comes on the heels of Pepsi’s launch of the “Unmute Your Voice” voter awareness platform during the 2020 VMAs earlier this year, a concerted effort to engage and educate 18-24-year-olds looking for more information on the power and functionality of their vote.

“Unmute Your Voice” is just the latest in Pepsi’s efforts to use the brand’s legacy in music to create a positive impact in 2020, including the brand’s role in helping bring “Global Citizens One World: Together at Home” event to viewers around the world. If additional details are needed on a state-by-state basis for voter registration or general voting information, viewers will be encouraged to visit RocktheVote.com/Pepsi or Triller.co/PepsiUnmuteYourVoice.