Harold was born in Niagara Falls to Wallace and Maria Reid in 1946 and attended Niagara Falls High School. He joined the Air National Guard in 1965, where he served in Vietnam as a fire control systems mechanic. Upon his return, he married Loretta in 1973 at St. Joseph’s Church in Niagara Falls. Harold relocated his family to Grand Island in 1981. He worked for Verizon as a communications technician for 30 years, where he served as union steward, and was a cherished mentor for dozens of technicians until his retirement in 2001. After retirement, he continued his passions for boating and vintage Corvettes.

The family held a private ceremony honoring Harold’s life Sept. 19 with military honors. In lieu of flowers, memorials may be made to St. Jude’s Children’s Research Hospital (www.stjude.org). Arrangements by M.J. Colucci & Son Niagara Funeral Chapel. Condolences may be shared at www.mjcoluccifuneralchapel.com. 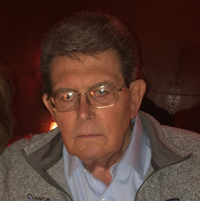