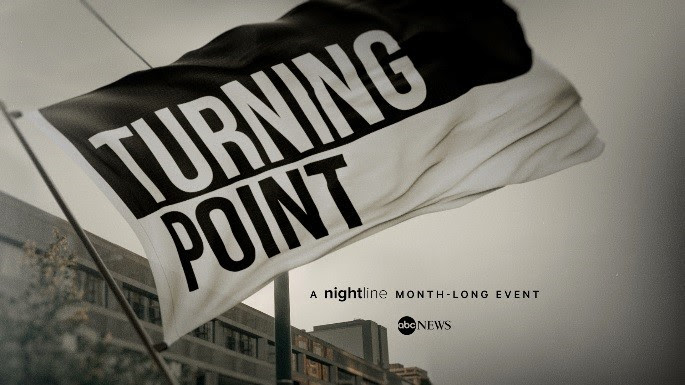 Has America reached a turning point? ABC News aims to find out with a groundbreaking series examining the racial reckoning sweeping the nation and whether it leads to lasting reconciliation

In the midst of a defining moment for the country when millions of protestors have called for justice and equality, ABC News aims to find out if America has reached a turning point with a groundbreaking monthlong series of reports examining the racial reckoning sweeping the nation and whether it leads to lasting reconciliation. The unprecedented ABC News programming event “Turning Point,” featuring a takeover of “Nightline” and special reporting across all shows and platforms, will “confront the systems and institutions that were built to disenfranchise people of color and have shaped this country throughout its history, and showcase the work being done to enact change.”

“Turning Point” was an award-winning ABC News program and series of specials in the 1990s hosted by some of ABC News’ most esteemed anchors. The network said, “It set the bar for reporting on compelling stories that emerged from ‘critical moments that changed lives, for better or worse,’ as the Orlando Sentinel described the show in 1994. With the four weeks of programming, ABC News and ‘Nightline’ will once again deliver its signature series of reporting on a concentrated topic – systemic racism and racial reckoning – asking pointed questions and documenting personal journeys.”

“Over the past few weeks and months, there has been a fever pitch echoing across the nation for this country to combat and undo its hundreds of years of systemic racism and inequities,” said Marie Nelson, senior vice president of integrated content strategy, ABC News. “With these special ‘Turning Point’ reports, our viewers will see our commitment to addressing this pivotal moment. This next month ABC News will provide context, history and hope with meaningful and impactful stories across broadcast, streaming, digital, audio and mobile.”

The special programming event is produced by “Nightline” and ABC News’ race and culture unit.

“With the reckoning that has been sweeping across the nation since George Floyd and most recently Jacob Blake, our ‘Turning Point’ coverage each night for the next four weeks is more vital and relevant than ever,” said Steven Baker, executive producer of “Nightline.” “Over the course of our reporting, we’ve been asking ourselves if America has reached a turning point and I’m proud to have ‘Nightline’ bring these powerful stories that confront this reckoning and hopefully bring us closer to answering that question.”

Samples of special coverage include the following:

•A “Nightline” three-part series, with special animations narrated by “The View” moderator Goldberg, gives a wide-ranging look at reparations, examining what America owes Native Americans, Mexican Americans, and descendants of the enslaved, what some form of “repair” could look like, and the impact it could have in cities like Asheville, North Carolina, that are enacting reparations statutes.

•Muir and the “World News Tonight” team, through the lens of the racial impact, will report on what “America 2.0,” post-COVID-19, could look like, how families are making it work amid an unemployment crisis, and the continued devastating effects on essential workers, schoolteachers, bus drivers and others. The program takes a close look at what the return to school looks like for communities where virtual learning is not an option and so-called pods where families are hiring teachers to come into homes and teach small groups of children.

•Also, “World News Tonight” will examine how global warming impacts poor communities and how climate change is exacerbating inequality in the U.S. With 2020 predicted to be the hottest year on record, the communities suffering the highest COVID-19 infection and death rates and the worst hardships from its economic fallout will likely confront yet further threats from floods and heatwaves and what measures could help them.

•“Good Morning America” co-anchors Roberts, Strahan and Stephanopoulos will report on the inspiring stories of those working toward inclusivity and equality.

•“GMA3” and anchor Robach will profile non-BIPOC who have taken up the fight for social change and justice, explore how racism affects people’s mental health, spend time with BLM co-founder Patrisse Cullors and hear from Bishop Curry about how love can lead the way out of this moment.

•“20/20,” with reporting by anchor Quiñones, profiles Vanessa Guillen’s family as they tirelessly advocate for justice. Along the way, Vanessa’s parents, Rogelio and Gloria Guillen, and sisters, Mayra and Lupe Guillen, share emotional memories of Vanessa. They also discuss how they learned about her disappearance, the desperate search to find her, the latest on the investigation into leadership at Fort Hood, and overwhelming support across the country.

•“This Week” co-anchor Raddatz travels on a cross-country road trip, kicking off in Pennsylvania and stretching all the way to Denver, to hear what voters think and feel about the nationwide protests, COVID-19 and the economy – and how that will influence their vote come November. Along the journey, she returned to Ferguson, Missouri, to see how that community has persevered since being rocked by the shooting of Michael Brown in 2014.

•“The View,” will feature special hot topics and segments that address the efforts to reconcile and remedy America’s past.

•“ABC News Live Prime” anchor Davis will shine a light on the challenges of everyday Americans across multiple backgrounds, who are struggling with their finances, their vote, and how to cope and deal with this moment of unrest and division.

•“Nightline” co-anchor Chang traces the sobering journey of “Brandon” who, after a boyhood mistake with friends, is jailed and eventually deported to Mexico, a country he has not been to since he was born.

•“Nightline” co-anchor Pitts spotlights a Christian sleepaway camp in Kentucky that gathers kids from different religions, races and socioeconomic statuses with the intention of fostering racial reconciliation through shared activities like the privilege line and having uncomfortable conversations with people they’d otherwise never meet.

•Correspondent Roberts examines the movement by teachers and students to teach a more thorough and inclusive portrait of American history.

•Correspondent Osunsami gives an in-depth look at how individuals and groups are confronting their own or their communities’ racist pasts and working to enlighten and bring about change.

•“Good Morning America” weekend co-anchor Harris shines a light on the growing wave of progressive prosecutors with a profile of Sussex County District Attorney Rachael Rollins, the first woman of color to hold the position.

•ABC News’ investigative unit delivers a chilling look into homegrown terrorism, the white supremacist movement from the Oklahoma City bombing to the rise in current day hate crimes, and how the government is combatting the threat.

•ABC News Digital peers into the history of disenfranchising Black voters in Mississippi, the economics of reparations, burnout felt among Latino health care workers, and whether there is a backlash to racial reckoning. Coverage also includes a look at the relationship police in the U.K. have with their communities, a feature on Black scuba divers who have excavated long-forgotten slave shipwrecks, examinations into “ally-ship,” voter suppression, police reform, whether Mexican immigrant essential workers are being left out of the racial reckoning equation, and an assessment on where the presidential candidates stand on race and social reform.

•ABC News’ flagship daily news podcast “Start Here,” hosted by Mielke, will check back in on an overwhelmed funeral home owner in New York who’s trying to provide end-of-life services to her disproportionately affected community of color while dealing with the loss of her husband to COVID-19.

•ABC NewsOne, the affiliate service of ABC News, will feature a profile by multiplatform reporter Lopez of a Latina educator who is singlehandedly going above and beyond to ensure students in a mostly Latino Georgia school district don’t fall behind during the pandemic. Additionally, multiplatform reporter Presha profiles Jawanna Hardy, a U.S. war veteran who, after returning to Washington, D.C., saw the streets were worse than the war zone from which she returned, and created “Guns Down Friday” to provide a safe and positive outlet for young people and moms who have lost children to gun violence.