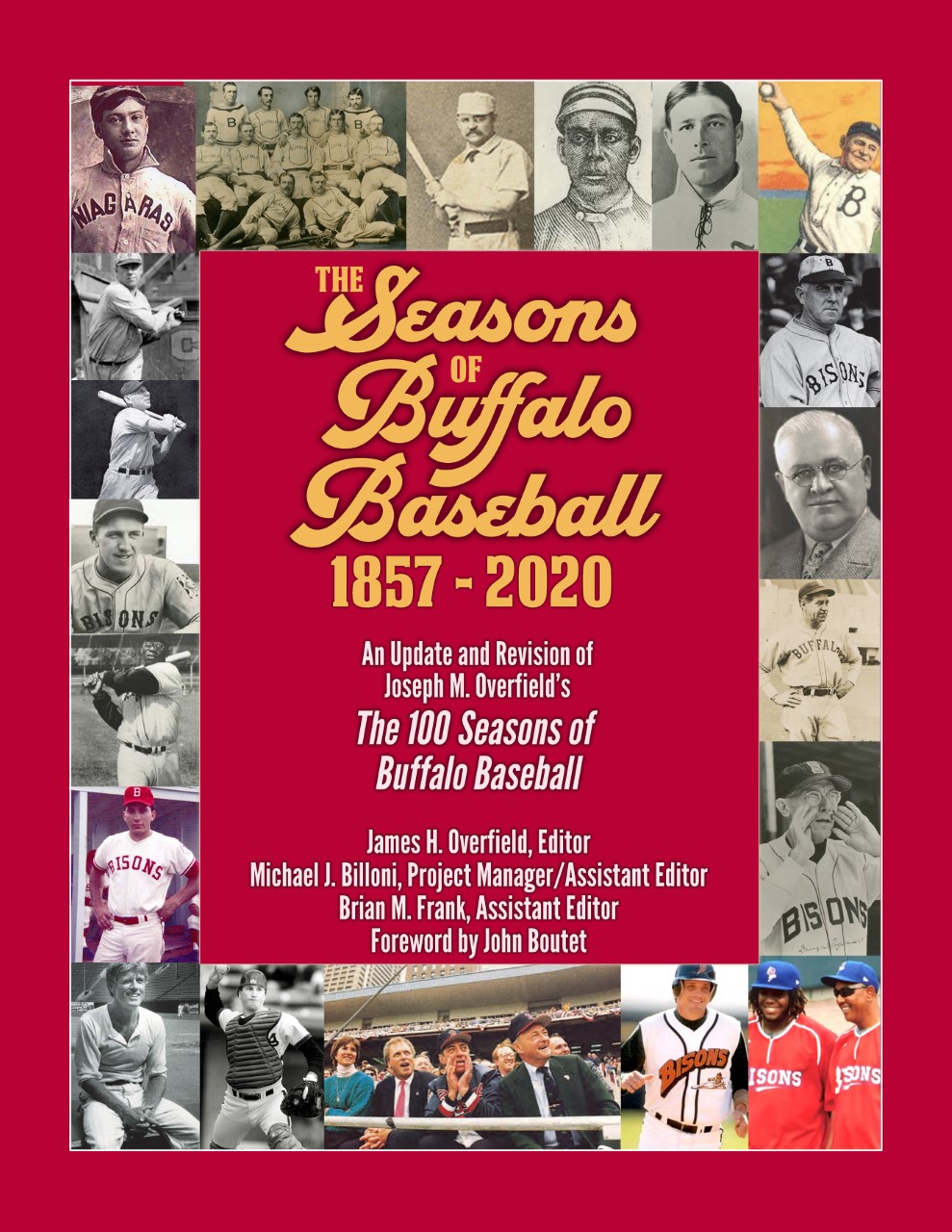 Following three years of intensive writing and editing, Jim Overfield and his collaborative writing team are weeks away from publishing an updated and expanded version of his father’s book, “The 100 Seasons of Buffalo Baseball,” originally printed by Joseph M. Overfield in 1985. This new version is titled “The Seasons of Buffalo Baseball 1857-2020.” It will be released during the World Series in late October. The book will retail for $49.95 with a special 10% discounted price of $45 plus tax and handling available for those pre-ordering the book from Aug. 21 through Oct. 1 at www.bisons.com.

A cover reveal event took place Friday inside the Johnny B. Wiley Amateur Athletic Sports Pavilion. Details were announced about a unique donation in the elder Overfield’s name: The Joseph M. Overfield Baseball, Softball and Mentoring Program, a collaboration with Omega Mentoring, The Willie “Hutch” Jones Educational and Sports Program and the Wiley Sports Pavilion. The donation will be from a portion of book sales and sales of a commemorative 26 Shirts creation that will pay homage to the rich history of baseball in Buffalo.

“My father had plans to revamp and update his book,” Jim Overfield stated. “Sadly, he passed in 2000 before he got to it. Many encouraged me to undertake the update myself. However, it was not until the fall of 2016, with my discovery of a box in my basement that I was inspired to think seriously about the project. That box was filled with copies of The Bison Gram, a Buffalo Bisons publication that appeared four times a year from the late 1980s to the early 1990s. My dad was a regular contributor to The Bison Gram, penning a series of articles titled, ‘BisonsTales,’ covering different aspects of Buffalo-area baseball history. From that discovery, it was only a matter of time before I decided to take on my father’s book editing and writing challenge. The end result is an expanded, 400-page book, with more than 150 black and white and color photographs, cartoons and images. This reveal of the cover artwork is a huge step forward as it signifies the book’s online and upcoming hard copy publication, with a design that acknowledges many who played a part in the rich history of Buffalo Baseball.”

The cover reveal will carry through the book’s baseball theme by taking place at what was once the home of the Buffalo Bisons, War Memorial Stadium – today known as The Johnny B. Wiley Amateur Athletic Sports Pavilion. In addition to the reveal, County Executive Mark Poloncarz was set to proclaim Aug. 21 as Joseph Overfield Day in Erie County, which he noted as well-deserved recognition of this compilation of Buffalo’s baseball legacy.

“Jim Overfield’s new book, ‘The Seasons of Buffalo Baseball,’ builds on his father Joseph’s work and presents a complete and colorful picture of baseball in Buffalo over the past 140 years,” Poloncarz stated. “Generations of Western New Yorkers have celebrated great baseball moments, endured tough defeats, cheered famous players, and enjoyed our national pastime here in Buffalo, and this book brings that rich and vibrant history to life.” 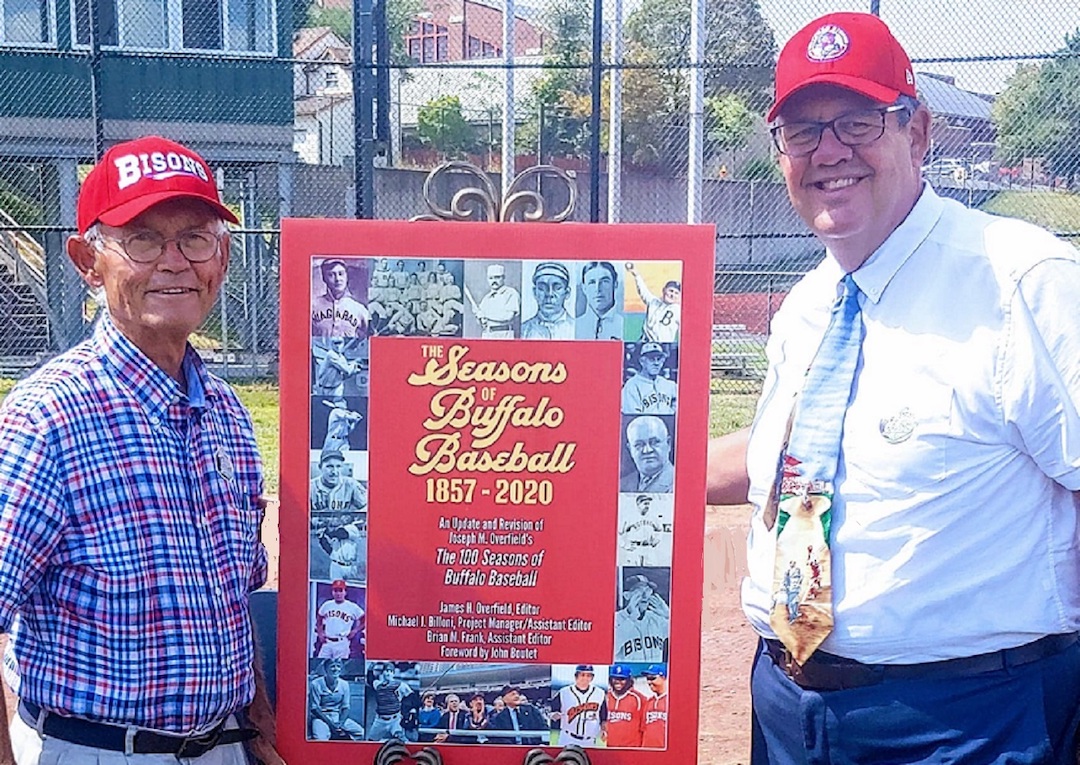 Niagara Frontier Publications’ writer Michael J. Billoni is project manager, assistant editor and publisher of “The Seasons of Buffalo Baseball.” A member of the Buffalo Baseball Hall of Fame, he was also the vice president/general manager of the franchise when the team made the move from War Memorial Stadium to its newly built, state-of-the-art downtown ballpark – now called Sahlen Field. He views this book as the ultimate chronicle of Buffalo’s storied baseball history.

“I have been doubly blessed as I worked closely with Joe Overfield on the original ‘100 Seasons of Buffalo Baseball’ book and now, 35 years later, we are announcing an update of that book with his son, Jim,” Billoni said. “I know Joe and the other original members of our Buffalo Baseball Hall of Fame committee are smiling down upon us with great pride,”

“The Seasons of Buffalo Baseball 1857-2020” is a collaborative effort that draws heavily from Joe Overfield’s book, especially its year-by-year summaries of each Bison season from 1857 to 1985. This richly illustrated book updates to 2020 and adds substantial new material about Bison players, managers, owners, ballparks, fans and memorable games. It also describes Buffalo’s surprisingly important role in baseball history.

Many authors have contributed to the book, including Brian M. Frank, an assistant editor on the project and creator of the website The Herd Chronicles; Paul Langendorfer, author of “Baseball in Buffalo”; Budd Bailey and Mike Harrington of the Buffalo News; Sam Maiorana of the Rochester Democrat and Chronicle; and former WGRZ-TV Channel 2 sportscaster Jonah Javad.

Jim Overfield is a native of Buffalo and a history professor emeritus at the University of Vermont. He is the author of several history textbooks, including the popular The Human Record. He is a lifetime sports fan following in the footsteps of his father. His passion for sports led him to become a certified official for baseball and basketball at the high school and college levels in Vermont. He is the father of three children, all of whom he made sure joined his family’s great tradition of becoming lifelong Buffalo sports fans.

Joseph Overfield was born in Buffalo on April 7, 1916. When he was 9 years old, he clipped a newspaper coupon for a free ticket to see his first Buffalo Bisons baseball game and fell in love with the team, growing up to become the preeminent historian of all things Bisons. His magnum opus, “The 100 Seasons of Buffalo Bisons Baseball,” encouraged widespread interest in the history of the team upon its publication in 1985. Overfield was a founding member of Society of American Baseball Research and the key lobbyist for Pud Galvin’s 1965 induction into the National Baseball Hall of Fame. He is a member of the Buffalo Baseball Hall of Fame and the Greater Buffalo Sports Hall of Fame. Outside of sports, Joe was a devoted husband to Clara, and loving father to Jim. He passed away July 20, 2000, at the age of 84.

The Omega Mentoring Program is a Buffalo not-for-profit organization of committed volunteers and mentors who inspire and motivate at-risk youth toward college through one-on-one mentoring. Mentors nourish a sense of pride, self-confidence and competence in their mentees, which leads to greater success in family, social, academic and business situations. They provide leadership formulated to deal with myriad problems faced by youth with an emphasis on self-love, self-knowledge, self-development and spiritual development.

Buffalo’s Willie Hutch Jones Education and Sports Programs have a goal to provide instruction, at no cost, in fundamental life (social skills) development, sports skill development, as well as academic support in science and math. In keeping with research findings that children engaged in extracurricular activities experience 5 % improvement in test scores, or that children who regularly play chess can experience up to 17% improvement in test scores, the WHJESP programs deliver outcomes in delinquency prevention, academic improvement and behavior. The mission is to provide every child – at no cost – equal opportunities to engage in the highest quality program and to offer character-building activities through academics, sports and the arts.