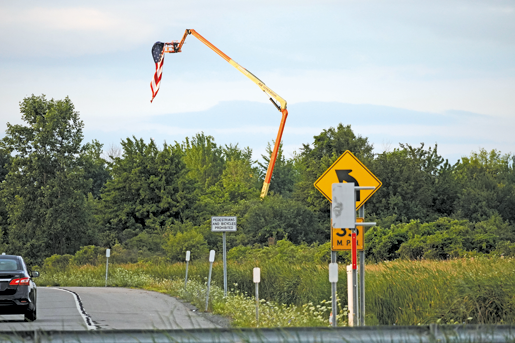 A crane with an American flag rises above the property where an Amazon e-commerce warehouse was proposed for development on Long Road. The height of the flag approximates the height of the proposed warehouse, 87 feet. (Photo by Larry Austin)

The decision by Amazon and its developer, Trammell Crow Co., to withdraw its application to build a 3.8-million-square-foot national distribution center on a 145.4-acre site at 2780 Long Road on Grand Island, essentially came down to growing and potentially uncertain costs. So said Supervisor John Whitney and the president of the Grand Island Chamber of Commerce.

Whitney was finalizing plans for Thursday evening’s socially distant public hearing in Town Hall about this project when he received a phone call from Trammell Crow representatives late Wednesday afternoon.

“They decided to pull the plug and withdraw their application,” Whitney said from his office.

“They had just concluded a meeting with upper level personnel and they cited costs and, specifically, the IDA (Erie County Industrial Development Agency) numbers. They said they will pursue other sites,” he added.

Eric Fiebelkorn, president of the Grand Island Chamber of Commerce, was a strong advocate of the potentially $300 million project since Trammell Crow (TC Buffalo) submitted a nearly 2,500-page plan in February to build what would have been one of the world’s largest warehouses on the former farmland off the I-190, which is owned by William and Michael Huntress of Acquest Development.

Fiebelkorn said he is disappointed Grand Island and Erie County will lose a combined estimated $51 million in property tax revenue over Amazon’s first 15 years and a potential 1,000 or more good-paying jobs – along with the $10 million the company had offered the town for public projects such as a possible community center. He contacted TC Buffalo Wednesday evening to see if anything could be done to change the decision.

The Amazon development had been known only as “Project Olive” until it was officially revealed by Erie County Executive Mark Poloncarz in late July after the project was placed “on pause” by the developer.

Fiebelkorn said TC Buffalo, representing its client, indicated a decision by Gov. Andrew Cuomo to extend the time to file an Article 78 lawsuit also played heavily into its decision.

Article 78 of the New York State Civil Practice Law and Rules places a statute of limitations for filing at four months. TC Buffalo had put that time into the project’s timeline. However, because of COVID-19, Cuomo, in executive order 202.8, temporarily suspended or modified various time frames, which included Article 78.

“From the developer’s standpoint, anyone could have filed a frivolous lawsuit and hold up this project for an extended period of time,” Fiebelkorn explained. “When this became open-ended, it suddenly added a huge risk to their business model.”

The other concern was the local labor policy at the ECIDA that states at least 85% of all the construction workers on a project must come from the eight counties of Western New York.

“If they do not adhere to that, they could potentially add considerable costs to the project,” Fiebelkorn said.

He noted the final decision was made during a Project Olive risk meeting with Amazon officials.

“When they added the additional risk factors, including a $10 million incentive to Grand Island and the costs they would have incurred to fix Bedell and Long roads – along with the massive landscaping projects they proposed – this became a very expensive project for them and outside their financial model,” Fiebelkorn said. 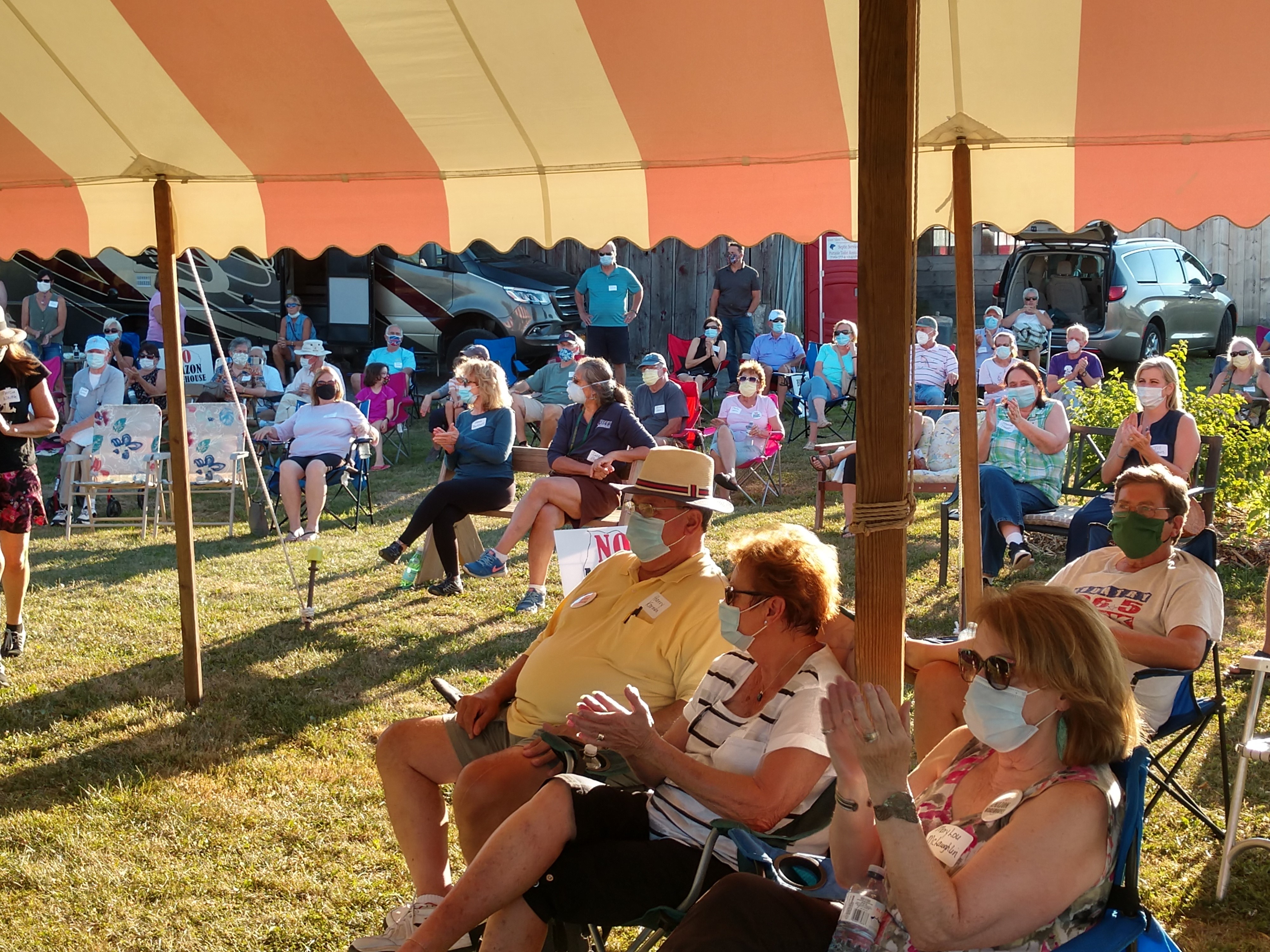 The Coalition for Responsible Economic Development for Grand Island (CRED4GI) recently held a rally to oppose the proposed Amazon warehouse from being built on Grand Island. (Photo by Michael J. Billoni)

Both Fiebelkorn and Whitney stated the developer never put the reason for the final decision to leave on the Grand Island Town Board, or the anti-project group Coalition for Responsible Economic Development for Grand Island.

Representatives for CRED4GI said they will wait until they see a formal letter from TC Buffalo or Amazon stating the project will not be built here before commenting. They cited TC Buffalo’s “pause” placed on the project late last month as a reason for apprehension to comment.

“The oppositions’ threats of lawsuits over this project did factor into their decision now that Article 78 has no end date,” Fiebelkorn said. “They could not risk having this multibillion project … held up any further if they had decided to move forward.”

Erie County Executive Mark C. Poloncarz said in a statement Wednesday evening: “My administration has worked hard over the past several years to bring Amazon to Erie County, but we were informed today that after further consideration Amazon has decided to halt their planned project on Grand Island.

“This is an unfortunate development as this project would have brought over 1,000 new jobs paying a living wage to our community and would have generated tens of millions of dollars more in taxes for the county, the town, and the school district, but Amazon has decided that the fit is not right at the current time.

“Amazon has created jobs in Erie County and invested in our workforce at their two other local facilities; so, while the Grand Island location is now off the table, my team is prepared to work with them, if necessary, to identify another possible location for this regionally important project or any other project.”

Sources have said TC Buffalo is now focusing its attention on two Niagara County sites: the former Summit Park Mall property, which is down the road from the Niagara Falls International Airport; and property on Route 31A near the Medina Business Park; plus a location in Genesee County in the Town of Alabama.

The project, wherever it is built, is expected to bring $200 million in construction wages and benefits and $32.6 million in annual payroll from the workers at the center.

It was expected Grand Island’s share of the tax revenues over the 15 years would have been $9.5 million, with $25.4 million going to the school district.