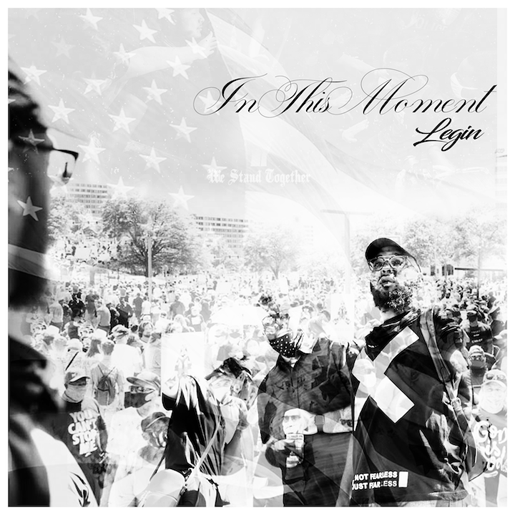 Legin delivers passionate call for unity & justice with 'In This Moment'

Church leader, speaker, community advocate, and acclaimed hip-hop artist Legin returns with “In This Moment,” a personal and passionate musical response to racial injustice, political divisiveness, and disunity in the country. Produced by Grammy Award-winner Laquan Green and written by Legin, the EP was birthed during a prayer march, which the artist helped organize and host in his hometown of Norfolk, Virginia, following the death of George Floyd. The event brought together more than 100 churches, with more than 5,000 people participating.

“This was a day I’d dreamed to see: the church unified,” Legin remembered. “Not for a service, concert or conference, but brought together by something we’ve been taught should divide us. The diversity in that crowd – as we urged reconciliation with God and man – showed me a tangible expression of ‘on earth as it is in Heaven,’ where none of this division exists.”

Just days after the march, Legin and Green set their experience – and years of working to build bridges of racial understanding and cooperation in their communities and churches – to music.

“We just recorded our raw emotion, feelings and perspectives tempered with what we believe to be balanced authentic gospel hope that isn’t polarized or intangible,” Legin said. “Motivated by the march; the current state of affairs and political rhetoric; and our Christ, we created ‘In this Moment.’ ”

The EP’s four songs bring to life Legin’s heart-cry for unity and compassion as ultimately expressed in the Gospel.

“Faces” is a stinging plea to not turn away from injustice, reminding believers to see every face as one made in God’s image. “Refuse To Pick” (feat. Parris Chariz) is the artist’s exhortation to step beyond divisive political rhetoric, following Jesus’ call above all. With the intensely personal “Feel,” Legin vulnerably processes his own emotions while dealing with the deaths of Ahmaud Arbery, Breonna Taylor and George Floyd. And the collection’s moving closer, “Cry,” is a modern-day song of lament, reminding listeners that any injustice done to a person of any color should be met with mourning

“I hope this project will help listeners move away from political idolatry, away from their corners, towards the middle of the room, towards God and each other,” Legin said. “The shadow of that idol dims the light the church is called to be. I believe the church has the answer. I don’t believe God has a plan B.”

Legin is a church leader, speaker, community advocate and acclaimed hip-hop artist. Holding a degree in biblical studies from Regent University, he currently serves as the creative visionary at CrossRoads Church in Norfolk, where he has preached regularly for seven years. In 2016, Legin and Pastor Kevin Tremper of CrossRoads formed the HR City Collective in the Hampton Roads area of Virginia. Through relationship building, panel discussions and other gatherings, the collective has sought to help faith leaders engage in difficult conversations about race, justice and the Gospel.

In 2017, Legin helped to create the Safe House Project, an organization that works to unite communities across America to end domestic sex trafficking, while empowering survivors with hope, freedom and a future.

As an artist, he has released 10 recordings, including 2017’s “Safe House” and 2018’s “Dark Room” EP. He has shared stages with Lecrae, KB, Tedashii, Nicole C. Mullen, and I AM THEY, along with pastor/author Matt Chandler, among others.