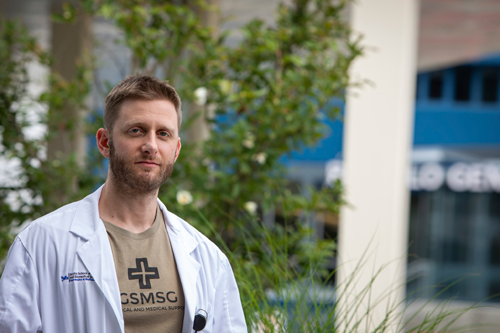 Aaron Epstein, M.D., used to work in counterterrorism and national security. Now a second-year surgical resident at UB, he leads an international medical mission group that is helping fight COVID-19 in the U.S. (Photo by Meredith Forrest Kulwicki, University at Buffalo)

The Global Surgical and Medical Support Group (GSMSG) sends U.S.-trained physicians to conflict zones to treat patients in places like Iraq and Syria and provide medical care and training when local health care systems are overwhelmed.

This year, the organization, founded by a University at Buffalo surgical resident who used to work in national security and counterterrorism, is also operating stateside, erecting mobile clinics to aid in fighting the COVID-19 pandemic.

The group has previously deployed within the continental U.S. in response to hurricanes that hit Florida, but expanded domestic operations earlier this year when the COVID-19 pandemic began surging in the New York City region.

Aaron Epstein, M.D., is a second-year surgical resident at UB who founded GSMSG in 2014 as a Georgetown University medical student and is now president.

According to Epstein, many of the physicians and other medical professionals who volunteer with GSMSG have military or defense backgrounds.

“It’s a natural connection,” he said.

“I put out the call to my entire listserv of a few thousand,” Epstein said. “I think we had 150 slots to staff and we got about 800 responses. So we ended up having to turn people away for the New York City site, but there was still a nationwide need for staffing. Team members were still asking, ‘What can we do?’ So we instructed them to mobilize in their communities and start staffing.”

The group has sent resources, physicians and nurses to international locations, including to the tiny Caribbean island of St. Martin, where GSMSG team members helped staff an improvised intensive care unit. Epstein noted many hospitals on small island nations, as well as many countries in the developing world, lack facilities like ICUs that are standard in more industrialized nations.

Now, with COVID-19 cases surging in the U.S. throughout the South and the West, GSMSG is mobilizing where the need is greatest.

After GSMSG mobilized in New York City, they were contacted by HHI Corp., an engineering and construction company that is building mobile triage units during the pandemic.

“They saw what we did with staffing in New York and were interested in donating to us a mobile triage unit, a mini clinic that sits on seven tractor-trailers,” Epstein said. “My first idea was we should put it in Buffalo, but by that time in mid-May the COVID-19 patient flow was well past the peak; so we reached out to our network to see where there was still pressing need. Folks in Miami were just starting to see the propagation of this wave of the pandemic, so we decided that would be a good place to establish a clinic.”

Currently under construction at the HHI headquarters in Utah, the mobile clinic should be completed later this summer. At that point, the unit will be shipped to Miami and integrated into the Jackson Healthcare System for processing COVID-19 patients for triage. GSMSG volunteers will assist in setting up and managing the clinic.

As a native of South Florida, that project is especially important to Epstein.

“Miami and the Jackson Healthcare System serve as a major health care hub for South Florida,” he said. “But the region is also a major point of entry for international medical and surgical patients arriving from Central and South America as well as the Caribbean islands. The catchment area covered by this system is truly massive and will allow us to impact those far beyond the borders of this country.”

As a native Floridian, Epstein gets the usual question from Western New Yorkers, which is some variation of why on earth did he pick Buffalo for residency? Steven Schwaitzberg, M.D., professor and chair of the UB department of surgery and president of UBMD Surgery, is a big part of that answer.

Like all fourth-year medical students, Epstein had had numerous interviews, including at some of the nation’s top hospitals. Around that time, he attended a military surgery conference with his mentor, Col. Rob Lim, an associate professor of surgery at Tripler Army Medical Center in Honolulu. Lim introduced him to Schwaitzberg, who had mentored Lim when he was a resident.

“Dr. Schwaitzberg is an incredibly inspiring guy,” Epstein said. “A lot of program directors and chairs I spoke to, I was more trying to sell myself to them, but with Schwaitzberg it was more like he really wanted me to come here. He himself is such a powerhouse. It was such a different approach. I realized that I’d rather go where they really want me.”

As a resident, Epstein and his colleagues in the program have been on the frontlines of the COVID-19 pandemic, treating patients at Buffalo General Medical Center.

“It was an intense time,” Epstein said. “Even though we never needed to mobilize our full contingency plans, we did everything we could to help out.” And while those difficult days are in the past (hopefully for good), Epstein noted the lessons will last forever – especially the sense of the whole team in surgery, medicine, anesthesia and other specialties, as well as nursing, all working together.

“I think this has given surgeons and the wider community more of an appreciation of all those in the medical profession, especially nursing. I was previously an EMT with a fire department and was always impressed by the emergency department nurses and staff who we would hand our patients off to, but the whole COVID-19 crisis has opened everyone’s eyes to what nurses and support staff do,” he said. “Look at these nurses who are truly the day-to-day frontline forces in the fight against COVID-19. How many people out there in the rest of the community would still even show up to work knowing that it could very possibly kill them? I believe the country as a whole more fully appreciates that these people will come to work even if it might kill them. They will put your health ahead of theirs. They are willing to die for you.”