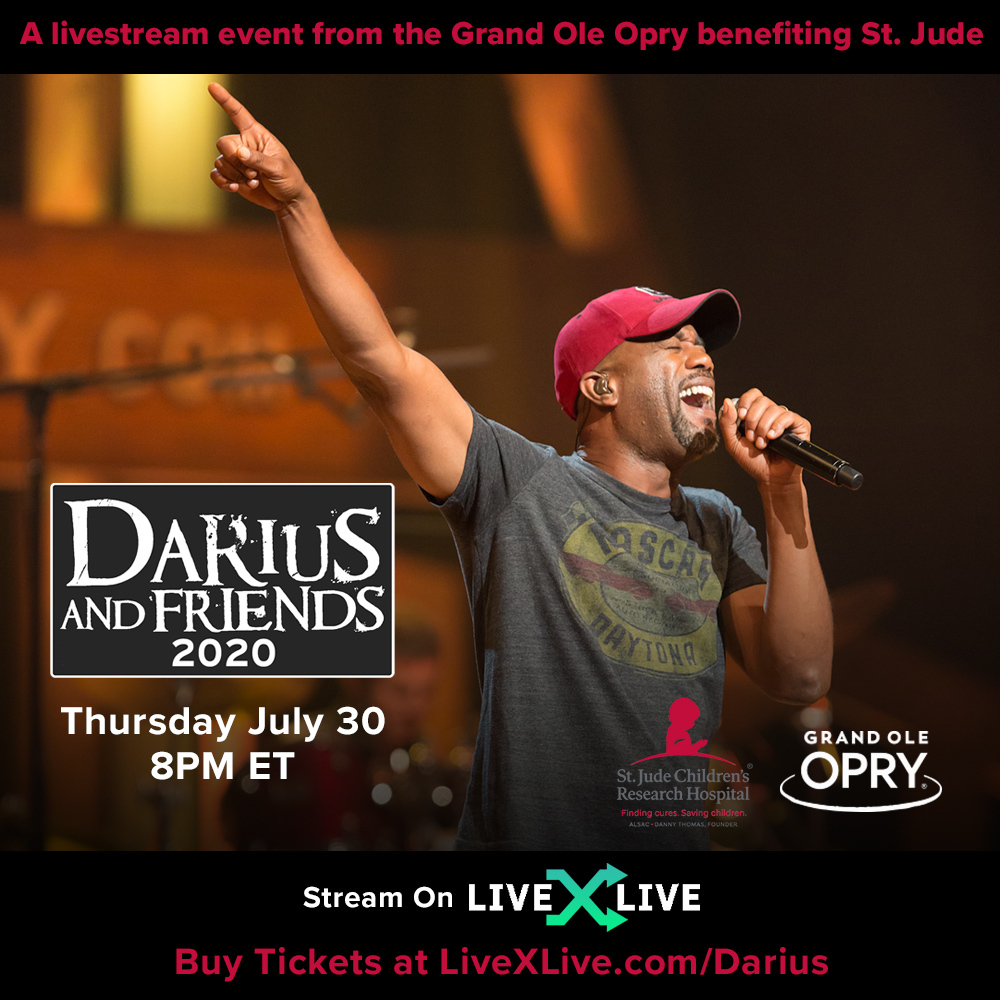 Together with LiveXLive, a global platform for live stream and on-demand audio, video and podcast content in music, comedy and pop culture, Rucker will bring this year’s show to fans as a pay-per-view live stream event available on LiveXLive.com/Darius and on LiveXLive’s app.

Now in its 11th year, the annual event has raised over $2 million to date. Rucker made a commitment to support St. Jude Children’s Research Hospital in 2008, after touring the hospital known around the globe for treating childhood cancer and other life-threatening diseases.

A press release noted, “Events like this help ensure families never receive a bill from St. Jude for treatment, travel, housing or food – because all a family should worry about is helping their child live.”

“Even though we can’t all get together for a normal concert right now, it’s important that we continue to support St. Jude and the amazing work that they do,” Rucker said. “I hope we can bring a fun night of music to everyone watching from home while also raising money for this important cause.”

Tickets to the pay-per-view event start at $15 with VIP options offering limited-edition and signed posters priced at $50 and $100 respectively. All tiers are on sale via LiveXLive.com/Darius. The event is made possible with support from sponsors CDW, Intel, PNC Bank, Cigna, Hendrix Enterprises and Delta Dental of Tennessee.

Rucker first achieved multi-Platinum status in the record industry as lead singer and rhythm guitarist of the Grammy Award-winning band Hootie & the Blowfish. Since releasing his first country album in 2008, he’s enjoyed four No. 1 albums on the Billboard country chart and nine No. 1 singles at country radio, earning a whole new legion of fans. In 2014, Rucker won his third career Grammy, for Best Solo Country Performance, with his eight-times-Platinum version of Old Crow Medicine Show’s “Wagon Wheel.”

As a lifelong philanthropist, Rucker is a constant supporter of the MUSC Children’s Hospital in his hometown of Charleston, South Carolina. He has also raised millions of dollars for St. Jude Children’s Research Hospital through his annual “Darius & Friends” benefit concert and golf tournament, as well as for more than 200 charitable causes supporting public education and junior golf programs in South Carolina through the Hootie & the Blowfish Foundation. In 2019, Rucker embarked on the completely sold-out “Group Therapy Tour” with his Hootie & the Blowfish bandmates as they celebrated the 25th anniversary of generation-defining smash “Cracked Rear View,” in addition to the release of “Imperfect Circle,” their first album in nearly 15 years.