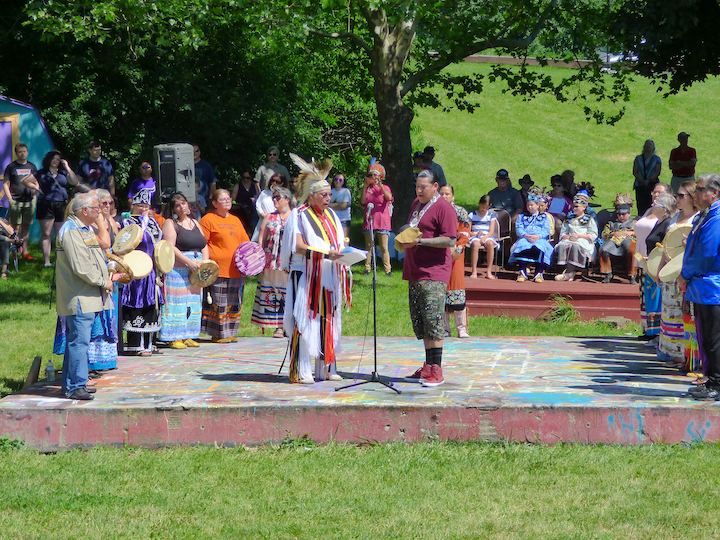 The inaugural Strawberry Moon Festival at Artpark, in 2019. (File photo)

Performance by BPO with Jon Lehrer Dance Co. postponed to 2021.

Artpark & Company announced the Strawberry Moon Festival performance featuring the Buffalo Philharmonic Orchestra with Jon Lehrer Dance Company, originally planned for Aug. 1, has been postponed to a new date (to be announced) for summer 2021.

The Strawberry Moon Festival celebrates the Native American traditions and culture that are deeply rooted in Artpark’s grounds and surrounding region. At 4 p.m. Aug. 1, as part of a new adapted festival program, Artpark will host a special event to unveil the Native American Peace Garden: A reflection space for healing, celebrating and tranquility. The concept and initial design of the garden is the brainchild of Michele-Elise Burnett of Kakekalanicks Consultancy and brought to life by a Native team from the Tuscarora reservation made up of Brian Printup (who finalized the design) and Rene Rickard, Vince Schiffert and Violet Printup. The free event is open to the public and will adhere to current public health guidelines.

The Native American Peace Garden will be located in the lower park (South Fourth Street entrance).

A press release said, “Designed in the sacred shape of the turtle, this garden will be a place for people from all Four Quadrants of the Medicine Wheel to come in unity and friendship. Overlooking the beautiful Niagara River, this healing garden will not only offer visitors the opportunity to relax and reflect in a peaceful setting, but will also act as an ongoing Native American outdoor land-based classroom with many Strawberry Moon Festival programs to be offered in the future.”

The celebration will begin with the traditional thanksgiving address, songs and a special wampum belt gifting ceremony to Artpark. It will be led by Dr. Joe Stahlman, director of the Seneca-Iroquois National Museum, and Richard Hamell, professor emeritus of Monroe Community College. The program will also feature storytelling, music and other performances, and special talks/Q&A sessions.

Strawberry Moon Festival is free to the public. Visit www.artpark.net for further information.

√ The David Gray concert was postponed, but is now canceled.