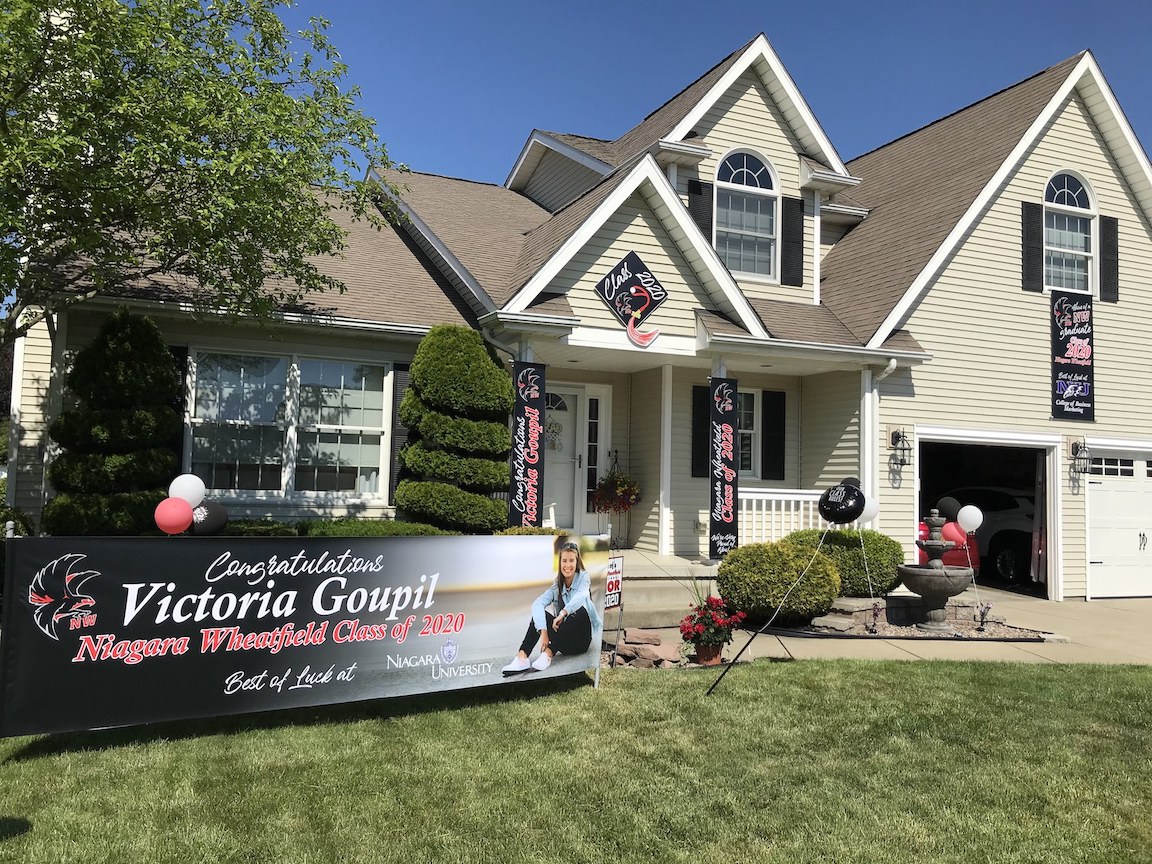 Niagara-Wheatfield graduate awakens to a unique surprise from parents

If you’ve driven through the Niagara-Wheatfield School District in the last few weeks, you’ve certainly noticed the myriad black and red lawn signs honoring recent high school graduates. They’re generally about the standard size of the campaign signs you see around election time, roughly 24-by-18-inches or so. They make for a nice, quaint, school-spirited way for a parent to show pride in their child’s accomplishments.

But for parents Jerry and Heather Goupil, these signs were simply not going to cut the mustard when it came to honoring their daughter, Victoria.

Looking at her scholastic accomplishments, Victoria’s parents have a lot to be proud of. She made the high honor roll throughout her high school career all while taking N.C.C.C. College Acceleration Program (CAP) classes. She graduated with an Advanced Regents diploma and a Seal of Bi-Literacy. Earlier in her high school career, Victoria was awarded both the Niagara-Wheatfield Teachers Association Falcon Pride Award and the Niagara-Wheatfield Central School District Character Award. She was also recently accepted to attend Niagara University, where she will be majoring in marketing.

“Victoria works really hard; she tries her best all the time. So, how can mom and dad make a statement that would let her know that her hard work was recognized and well deserved?” Mr. Goupil said.

When it came to getting signage for her, the couple knew it wanted to go bigger. …

They opted to create their own custom signs and banners to surprise Victoria on the morning of graduation.

However, with her home from school all day during the pandemic, creating the signs in secret was quite the challenge. In the weeks leading up to graduation, Mr. Goupil said he would get up at 1 a.m. and work until 4 a.m., secretly designing the signage on his computer.

An engineer by trade, Mr. Goupil insisted he’s not much of an artist. But the final results speak for themselves.

After receiving permission from school officials, he used the official school logos for Niagara-Wheatfield and Niagara University, to give the signage a thoroughly professional look.

The final designs were printed by Rob Mathieson of WNY Print and later delivered to Mr. Goupil’s workplace. The night before the surprise, the signs were stored in a neighbor’s garage. The parents then got up at 5 a.m., to decorate the house before Victoria woke up.

Victoria said she was blown away by the surprise and struggled to figure out when her parents found the time to get everything ready.

For Mr. Goupil, it was a job well done.

“You know that you achieved your goal when you see your child beaming ear to ear. Just smiling so much it almost looks like their eyes are closed ... she was just ecstatic,” he said.

Victoria wasn’t the only one surprised.

“My friends came over the night of graduation and they were like, ‘We’ve never seen anything like this. It’s super cool that your dad would design and personalize all this for you,’ ” Victoria said. “My friends just had the same house signs the school gave out. But the personalized banners added a special touch to my graduation day and just made everything a bit more special.”

While Victoria said she was caught off guard by the signs (and the mini-social distance parade her family sprung on her later), she’s not surprised by the lengths her father would go to make her feel special.

“He’s the type of guy who loves to go above and beyond,” she said. “He’s always gone the extra mile to make something important for me since I am an only child. … Everything from my dance competitions or awards ceremonies, he always has to do it right and it has to be perfect … I love him so much for doing that.”