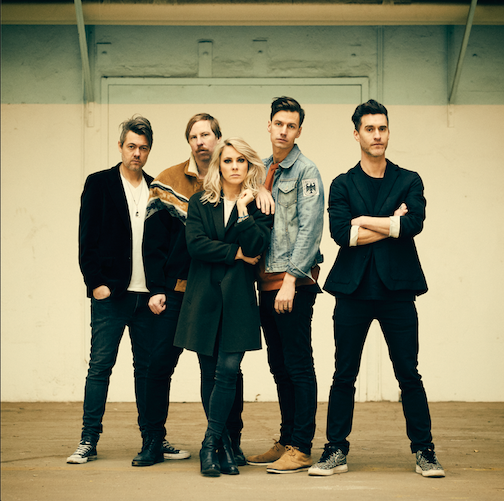 The Sounds return strong with 'Things We Do For Love,' first full album in 7 years

Swedish indie rock group The Sounds have released its sixth album – the first full record in seven years, “Things We Do For Love” (Arnioki Records).

Considering The Sounds’ 22-year career, it’s no surprise that “Things We Do For Love” is a musically accomplished and sonically polished master class in electro-flecked, neon rock. With “parenting” now a band concern and musical history with a wide wingspan, The Sounds are no strangers to growth and change. This album harnesses their hard-earned maturity and dynamic chemistry into effervescent zing and escapist ’80s indulgence reminiscent of the quintet’s Platinum-selling 2002 debut “Living in America.”

Things We Do For Love instinctively recaptures The Sounds' perky, punky best; conjuring images of smeared neon nights on the town, falling in love, and the mutual tingle of things left unsaid, all with a sparkle of defiant optimism – forever reaching for something brighter and better than the socially mandated status quo.

The first single and title track, “Things We Do For Love,” offers layered synths, whirlwinds of guitar solos, and percussion shaker sections. This rollercoaster of love single introduces the record like the “thousand pounds of dynamite” lyrics suggest, and offers an explanation for how anyone feels when the love bug takes hold.

“There’s so many things that you do for love – as a mother, as a lover … or for money. Whatever your love may be,” vocalist Maja Ivarsson said. “And that can mess you up – or mess things up.”

The frenetic feel continues with the second single, “Safe and Sound,” reaching back to the year 2006 with the band's trademarked sleek synths. Maja’s vocals flow strong in each verse, running alongside a gunning bass, pulsating keys, and a mirrored kick drum.

“I wanted it to sound like you’re in fifth gear in your car… just driving into the moonlight,” she said. The track feels like the search and yearning for something new, leading perfectly into the contemplative and atmospheric "Changes."

The shifty and shimmying “Bonnie and Clyde” describes the titular iconic duo and embraces that love can sometimes be toxic and dangerous, but it’s all about taking the risks. Elsewhere on the album “Hollow” talks of revenge-filled anger that has built up within time, while “Dreaming Of You” is the complete opposite – depicting the unsaid words of saying something to someone they care about.

Though all members contribute to songwriting, Maja has found herself more involved than she’s been since the band’s first two albums – now often collaborating with drummer Fredrik Blond. While The Sounds’ personal lives are lately very different from their 2000s perma-tour, bright-lights blur, their new sense of structure has massively benefited “Things We Do For Love.” The album’s 11 songs are effectively a “best-of” selection culled from many years of unusually disciplined and purposeful songwriting, scheduled around school runs (both Maja and guitarist/keyboard player Jesper Anderberg have become parents since their last album) and other everyday duties.

“Dim The Lights” has the band calling out the fact of not being kids out in the world anymore. Sometimes one needs to “dim the lights, lock the doors” to reflect on emotions and figure out the search for who we really are.

“Things We Do For Love” captures The Sounds at the very height of their collective powers: an intersection of young-at-heart verve and chiseled expertise that only happens once in a band’s lifetime, if at all.

Formed in Helsingborg, Sweden in 1998, The Sounds exploded worldwide with “Living in America” just four years later, propelled by singles “Seven Days a Week,” “Rock ‘n’ Roll” and the title track (which hit No. 3 on the Swedish charts). Over the decade that followed, the band toured relentlessly (more than 200 shows in 2006 alone, the majority in the U.S.) – including runs with Foo Fighters, No Doubt and The Strokes – and founded their own record label, before finally coming up for air after 2013's “Weekend.”