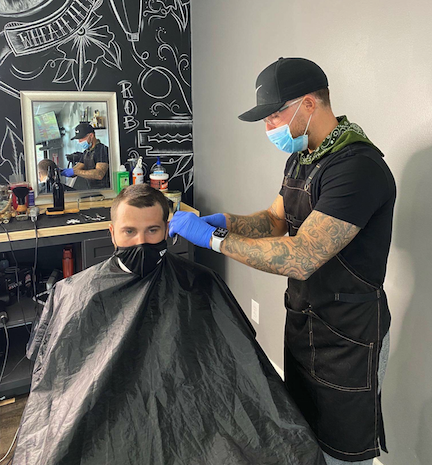 Time to kiss that quarantine haircut goodbye. On June 5, Gov. Andrew Cuomo named Western New York as one of the five regions in the state to allow barbershops and salons to reopen, albeit with some noteworthy restrictions.

Shops must limit their total workforce and customer presence to 50% of the maximum building occupancy at any given time. Employees are required to wear face coverings and face shields (or goggles) at all times while performing hair services. Employees who interact with customers must be tested at least once every two weeks, and shops must keep a log of customers for contact tracing in the event an employee or customer tests positive for COVID-19. Additionally, businesses can only provide hair services. Nail services, massages, and facial hair waxing and shaving are not permitted at this time. However, the state announced Tuesday that those services are set to reopen in phase three.

Since the announcement, local shops in Niagara County have begun to reopen and customers cannot wait to book their appointments.

The Clark family, who has owned Ciao Hair Salon in the Town of Niagara for over 30 years, said customers have been “beating down the door” since they announced they were reopening last week.

“People are definitely excited. … We were getting calls and messages online saying, ‘I’ve been coming for 30 years, can I be the first one, or the second one?’ ” the Clark family said.

“Oh my god they just cannot wait to get in the salon. They’re so eager,” said Shari Leta, owner of Obsessions Salon & Spa in North Tonawanda. “I am booked solid for the next two weeks.”

King Cut’s owner, “Barber Berto” as he’s known to clients, said, during his first week open, he and his fiancé had been coming in early and stayed open between 11:30 p.m. and midnight all week long.

Berto said between seeing all of his clients again and reopening amid all the restrictions, “It was like the first day of school, you know? A little nervousness, a little excitement.”

He added, “It’s all kind of crazy, but at the same time whatever makes the public feel safe, I’ll be more than happy to jump through any hoops they want me to jump through.”

The price of maintaining these businesses during the shutdown has not been easy, and some business owners say they’ve felt left out in the cold by state and local governments.

Leta, who was set to celebrate her business’ seventh year anniversary when the shutdown announcement came, said she came precariously close to losing her store during the shutdown.

“It’s been a tough road, I’m not gonna lie,” Leta said, explaining she only received $190 a week from unemployment and couldn’t qualify for state aid because she would’ve had to keep her staff on payroll. She said that, without financial assistance from her husband and daughter, she believes she would’ve had to close or even file for bankruptcy.

“I mean, the bills didn’t stop. The electric, the taxes – just everything. So for me, I feel like I’m starting all over again,” Leta said.

State-required PPE and other necessary requirements also don’t come cheap and many storeowners said they’ve purchased their own. Leta said she’s spent “a couple thousand dollars” between PPE, thermometers and a new setup for when clients come in.

Slawich Cut N’ Shave owner Mike Slawich said he was also unable to get approved for any grants or loans. Despite this, he and barber Robby Phillips said the store has gone above and beyond state requirements by adding screens in between chairs. The decision was made partially because both of their mothers are nurses.

“Knowing the magnitude of what’s going on, we wouldn’t want to do anything where people had to worry about getting infected coming in here,” Phillips said.

Storeowners said that, during the shutdown, they received an incredible outpouring of support from the community. Many of the aforementioned said they received unsolicited donations of PPE, and often money from clients.

“I mean, it was just awesome; the community is just great. To be honest with you, I don’t think I’m ever going to shut my door again,” Berto said.

This fact might at first seem surprising, but as many of these owners pointed out, salons and barbershops aren’t merely where people come to get their hair cut. Over the years, customers and haircare professionals get to know each other intimately, and each of the owners interviewed referred to their clients as family.

“There’s a real impact in people’s lives. We’re almost like a therapist here – people will tell us their problems and what they’re going through, and we’ll share each other’s stories and have some touching moments; cry a little bit here and there,” Berto said.

That familial element, these owners said, is the one thing they missed most.

“One thing we miss is we can’t have the waiting rooms open,” Phillips said. “It’s a barbershop, men come in here and talk smack and crack jokes and have fun. So we really miss that aspect.”

His sentiments were echoed by Leta, who said, “It’s just not going to be as personable as my salon used to be. We care about making people feel good.

In the end, anything reminiscent of normal, even just a trip to the barbershop, makes for a welcome reprieve from the seemingly unending supply of depressing news. Despite the restrictions and financial headaches, these owners said that, in the long run, those fleeting moments of cheer are what it’s all about.

“(It’s about) making someone who maybe didn’t feel beautiful about themselves when they came in … walk out feeling like a new person. It just lifts everybody’s spirits, and that’s what we need right now,” the Clark family said. “We need people to be in a better mood, to be more optimistic about the future, and I think we’re adding to that.”

“Our ‘ReStart Niagara’ effort has been doing whatever we can to help businesses get up and running again, including providing hand sanitizer and face coverings to employers to help them meet state guidelines,” said Andres, chairman of the county’s economic development committee. “Many hair salons and barbershops called looking for face shields, which we unfortunately did not have. But now that the guidelines have been updated to include goggles, we do have a supply of those to make available.”

He added, “I want to acknowledge the efforts of Jon Schultz and our Emergency Services Department who continue to procure and distribute the personal protective equipment to help businesses get open. We have heard from businesses that much of this PPE is in short supply, so Jon’s effort is an important part of getting our economy moving again.”