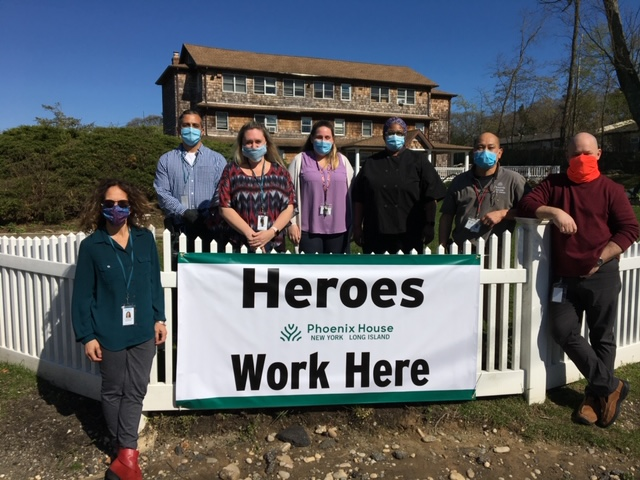 While volunteering in New York City and suburbs, UB addiction medicine physician sees the effects of the pandemic up close. (University at Buffalo photo)

Treating substance use disorder amid pandemic

While volunteering in New York City and suburbs, UB addiction medicine physician sees the effects of the pandemic up close

When Gov. Andrew M. Cuomo put out the call in March for health care workers to volunteer in New York City during the height of the pandemic, Tildabeth Doscher, M.D., eagerly signed up: “I said I was willing to do anything, happy to provide support in whatever way was needed.”

She volunteered for three weeks, from April 12 to May 3.

Doscher is clinical assistant professor in the department of family medicine in the Jacobs School of Medicine and Biomedical Sciences at the University at Buffalo, director of UB’s addiction medicine fellowship, and an addiction medicine physician with UBMD Family Medicine. That experience allowed her to bring to the pandemic’s epicenter in New York City a set of skills for a vulnerable population that has seen many critical, lifesaving supports disappear as a result of the lockdown during the pandemic.

Even before heading to the city to volunteer, Doscher had been thinking about how to address the issue of people with substance use disorder in rehabilitation facilities who might have the virus. On March 24, she was discussing the issue on a conference call with medical directors at the state’s rehab facilities, including Doug Bass, medical director of Phoenix House, one of the state’s largest.

Tragically, he passed away five days later from COVID-19.

“The combination of Doug’s death and the COVID 19 virus impacting staff and patients in increasing numbers left Phoenix House struggling,” Doscher said. “Because of Doug’s death, I offered to devote my volunteer effort as interim medical director for Phoenix House.”

‘Adding the Dark Unknown of the Virus’

Upon arrival in New York City on April 12, Doscher was struck by the size and complexity of Phoenix House, which has more than 200 residents in programs throughout New York City and Long Island.

Even under the best circumstances, she said, working with people with substance use disorder presents many challenges.

“Adding the dark unknown of the virus magnified the usual challenges of providing treatment for this population,” she said. “The congregate setting made social distancing a near impossible task. Space and resources are limited. Staff were ill or, because of fears engendered by the virus, declining to come to work.”

While she was there, some residents were put into isolation, some were admitted to the hospital, and some who had been hospitalized returned to Phoenix House.

“COVID-19 presented us with continual puzzle pieces in trying to manage people in a congregate setting,” Doscher said. “It was hard being the person that was being turned to for guidance and expertise in a situation where expertise simply does not yet exist. It was like building a plane while flying it, and not being a pilot. The official New York state and CDC guidelines were shifting sands as the understanding of the illness evolved, so the rules of the game were changing daily.”

At the same time, the pervasiveness of the issues caused by COVID-19 seem to overwhelm the needs of those with other conditions.

Doscher noted that, unfortunately, overdose rates have increased since the virus outbreak.

“Partly this is because people are using substances alone, and there is nobody to supply Narcan or call an ambulance or get someone to the hospital,” she said.

Social distancing restrictions are also negatively affecting patients with substance use disorder, she said. The outpatient sites she works at in Buffalo started providing patients with take-home bottles of methadone so they don’t have to come to clinic. That bothered some of them.

“A good number of people want to keep coming to the clinic on a daily basis,” she said. “I think part of this is that the clinic has become a touchstone in their lives, it is how many patients make contact and connection with the world outside of themselves. When we take that away, we take away a sense of self, and this can be debilitating.

“People with substance use disorder are often tormented by the isolation and lack of connection that is already inherent in their lives. This situation has exacerbated the sense of isolation that already brands their psyches.”

On the other hand, Doscher observed that, because of the pandemic, the obstacles that used to prevent the wide use of telemedicine for treating substance use disorder have begun to disappear. Typically, she said, access to treatment was limited because of a lack of providers or simply the lack of transportation.

“Because the rules have not only relaxed, but telehealth is now being encouraged, many of those obstacles are being erased,” she said. “This opens up the possibility that treatment for substance use disorder can extend beyond the current 10% of those who now receive treatment. Increased access would be a godsend for many of those struggling with this illness.”

While in New York, Doscher also began working as an attending physician in a telemedicine “instant access clinic” for people with opioid use disorder that was established during the pandemic at Bellevue Hospital. The goal was to offer access without barriers for people with opioid use disorder and to begin treating their illness appropriately, with the medication that has proved to be life-saving, buprenorphine.

She said that many of the clinic’s patients were started on buprenorphine while in jail on Riker’s Island: “Riker’s is unique in the fact that it is a Department of Corrections facility that actually provides treatment for opioid use disorder. Because of the COVID situation, people are often being discharged from Riker’s more rapidly than they have been in the past.”

The clinic at Bellevue provides continuity of care for opioid use disorder and connects patients to longer term follow-up substance use disorder, psychiatric and general medical care.

“With the increased access that accompanies expansion of telemedicine comes increased opportunities for addiction medicine physicians that are not constrained by a geographic divide between provider and patient,” said Doscher, who will continue both as the medical director at Phoenix House and as a one-day-per-week volunteer attending physician for the clinic at Bellevue. “This is all remote, part of the open door that the current crisis has provided.”

Now back in Buffalo, Doscher feels only gratitude that she was able to help out.

“I feel incredibly fortunate that UB gave me the opportunity to experience this unfathomable moment in the epicenter of the outbreak in the United States,” she said. “It was good to feel that there was some small part I could play in helping relieve the shock and confusion and illness that was engendered by this microscopic foe, especially in the context of helping to care for a patient population that I feel honored to serve.”