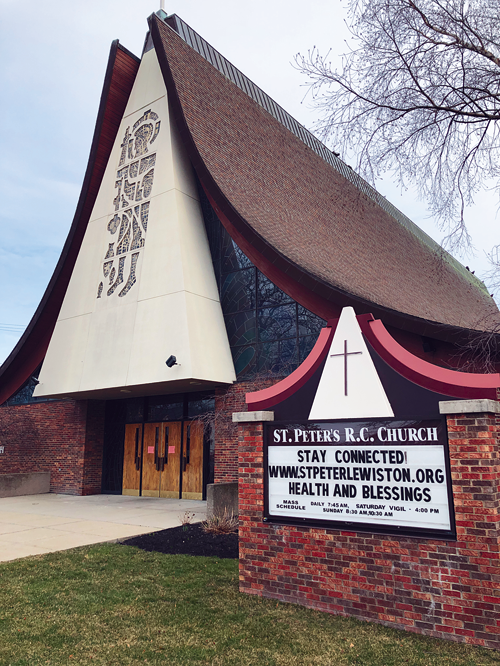 St. Peter R.C. Church in Lewiston has been closed to the public since March. (File photo)

Cuomo to allow religious gatherings of no more than 10 people; drive-in & parking lot services will be allowed statewide

Gov. Andrew M. Cuomo on Wednesday announced that, beginning Thursday, May 21, religious gatherings of no more than 10 people will be allowed statewide where strict social distancing measures are enforced and all participants wear masks. Additionally, drive-in and parking lot services will also be allowed beginning Thursday.

The governor announced the state is convening an Interfaith Advisory Council to discuss proposals to safely bring back religious services. A list of the members of the council is available here.

“We're working with religious institutions,” Cuomo said. “Right now, they can have up to 10 people with strict social distancing guidelines at religious gatherings. We ask them to consider drive-in and parking lot services for religious ceremonies. We're going to be working with our interfaith advisory council. Our interfaith advisory council has representative of the religious community across the state, all different religions.

“A religious ceremony by definition is a gathering. … It's a large number of people coming together. We know from New Rochelle, Westchester, the first hotspot, that religious ceremonies can be very dangerous. So, we all want to do the same thing, the question is how do we do it, and how do we do it smartly and efficiently. I will be talking with members of the religious community on doing just that and I'm sure we can come up with a way that does it, but does it intelligently.”

•Cuomo announced the results of the state's antibody testing survey at churches in lower-income New York City communities and communities of color show 27% of individuals tested positive for COVID-19 antibodies, compared with 19.9% of New York City's overall population. The data was collected from approximately 8,000 individuals and shows high positive rates and continued high community spread in these low-income communities.

To address these continued high infection rates in low-income and minority communities, Cuomo announced the state is continuing its partnership with Ready Responders to expand testing from eight to 40 public housing developments across New York City. The state is also partnering with SOMOS to establish 28 additional testing sites at churches and community-based providers in predominately minority communities, for a total of 72 faith-based testing sites in the state in partnership with Northwell Health and SOMOS. The state will also work to stop community spread in these neighborhoods by increasing PPE availability, providing hand sanitizer, enforcing social distancing and expanding public health and education in these communities.

Cuomo directed all local governments to expand testing in low-income communities and develop outreach programs to help address the disparities in these communities.

"All across the country, low-income and predominately minority communities are still seeing an increase in the numbers and are suffering the most from this virus," Cuomo said. "We did a very extensive research project and found that this is true in New York City where the percent of individuals who tested positive for COVID-19 was much higher in lower income communities than the general population. The data also shows not just a high number of positive cases, but that the spread is continuing in those communities and that is where the new cases are coming from. So, we did the research and we have the data, but now we must implement aggressive, targeted strategies in these highly impacted communities to help address these disparities."

•The governor announced the five finalists for the “Wear a Mask New York” ad contest, which was launched by Cuomo on May 5 and is being overseen by his daughter, Mariah Kennedy Cuomo. New Yorkers were asked to create and share a video explaining why people should wear a mask in public.

Over the past two weeks, the state collected more than 600 submissions from New Yorkers across the state. People can vote for the winning ad until Monday, May 25, at WearAMask.ny.gov. The winning ad will be announced Tuesday, May 26, and that ad will be used as a public service announcement.