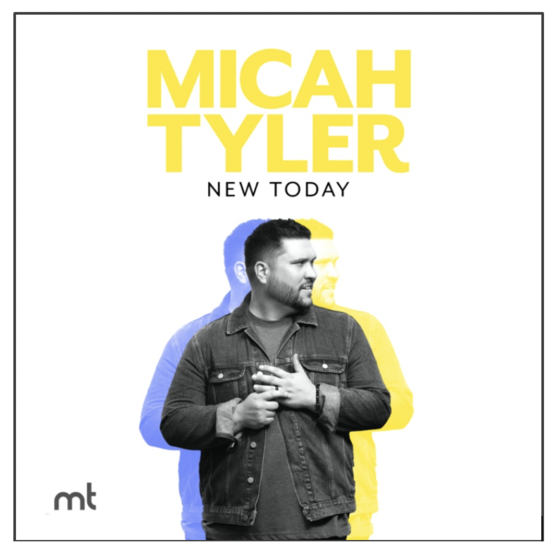 The anticipated new project from Fair Trade Services' chart-topping artist Micah Tyler, titled “New Today,” drops today. Since he can't share the new songs live on tour, Tyler decided to bring them directly to fans all over the country and the world through virtual release parties.

Beginning at 1 p.m. ET, fans can join Tyler on Facebook Live for a virtual release party (click here for details). At press time, already 50-plus stations across the country are on board to live stream the event online, reaching more than 3.5 million Christian music fans.

“I’ve struggled the past few weeks, because releasing an album in the middle of so much craziness and uncertainty just feels strange," Tyler shared. "But we’ve been working on this album for three years now and the goal has always been to write music that brings hope to people that feel hopeless. So, if there was ever a moment to point people towards the hope of Jesus, now feels like as important a time as ever.”

He said, "One of my favorite parts of making new music is the chance to share it with people in person. As sad as it is to not be able to hop on a stage and share these stories in person, I am so pumped for the chance to share everything with live stream concerts! Connecting with people all over the world, safely in our homes, is such a gift and I could not be more excited!"

Tyler, who made his label debut with 2016's EP “Different,” followed by an LP of the same name, quickly became known within the industry by both his vocal prowess and songwriting talents. With three No. 1 songs to date and his current single, "AMEN," which is quickly climbing the charts and currently top 5, he is also a GMA Dove Awards Best New Artist nominee (2017) among other nominations.

Following the success of “Different,” it soon became time for Tyler to create a new album and write the most authentic stories he could with the life experience he's had. Most of all, his desire was to create songs that would line up with God’s word, but what he didn’t count on was his whole world caving in.

It began in 2017 when Hurricane Harvey directly hit his hometown of Buna, Texas; then, a few weeks after the hurricane, Tyler’s younger brother was diagnosed with stage four colon cancer.

“Those two things happening back-to-back made for a roller coaster of emotions, and there I was trying to write a record in the middle of all of it,” he said. “There were times I was walking into writing sessions knowing the song I wrote could be playing in victory over my brother’s cancer or playing at a funeral in victory over his cancer in glory. I tried to be very present and honest in that.”

For Tyler, the 11 songs on “New Today” are an all-encompassing representation of his family, his story, the trials he’s personally faced, and how he’s found God through it all.

Tyler has been sharing with key media outlets more about New Today as well as life in quarantine with his wife and three children. Stories have been posted on CCM Magazine, Faith Radio's “On The Road with Ryan Thomas,” the “Becoming Something Podcast” and “Dad Tired,” while upcoming interviews will soon post with Charisma's “C-POP” podcast, “The World & Everything In It,” The Overflow's “Beyond The Music” and “The Worship with Andy Chrisman” podcast.

Following two independent releases, Tyler debuted the EP “Different” (2016) and the LP of the same name under Fair Trade Services. With three No. 1 radio hits to his name, Tyler has numerous other achievements such as a GMA Dove Awards New Artist of the Year nominee (and two other GMA Dove Award nods), is a K-LOVE Fan Awards Breakout Single nominee, has two BMI song awards, and was GMA's Immerse Conference Male Vocalist of the Year (2012). He has toured with MercyMe, Crowder, Jeremy Camp, Phil Wickham, We Are Messengers and Big Daddy Weave.

After having served as a youth pastor for over a decade, Tyler has a true love and respect for the local church. To find out more, visit MicahTyler.com.