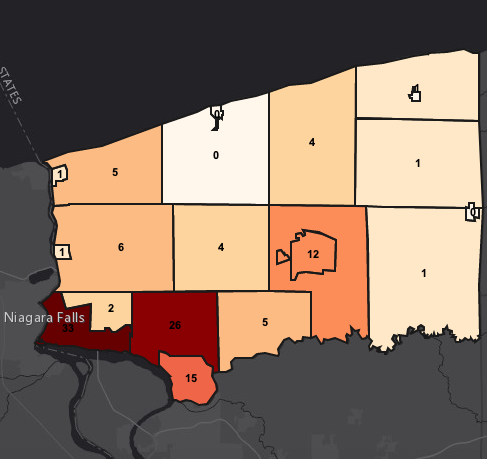 Wydysh: Lack of testing a 'major frustration,' but 'we are fighting for you in every way that we can to get those tests here'

Visit the “heat map” for updates.

“We’re seeing an increase that has not let up,” he said. “It’s going to continue to go this direction for the foreseeable future.”

He added, “We still have a few communities that don't have any positive results. It doesn't mean they don't have positive cases; it just means people haven't been tested enough to come up with those positive cases yet. But, it's important that people know to expect it's still there. We believe that the virus is spread throughout Niagara County. The numbers are showing that.”

Wydysh said, “One hundred and thirty positive individuals to date, but, again, we know that number is potentially much, much higher if we were doing (more) testing.”

She added, “Everyone's waiting for the apex, or when we're going to hit the peak of this crisis here locally. The governor gets asked this question every day on his live broadcast. In fact, today he told us, currently in New York state, there are 130,689 positive cases that have come back. So again, that's almost half of the entire total for the country. (Of that), 16,837 hospitalizations, and now 4,758 deaths from COVID in New York state. He did also mention, however, that the death rates have been flat now for a couple of days.”

Wydysh asked Stapleton, “What kind of data are you looking at that would make you think that maybe we're getting to the top of the mountain here?”

He replied, “It's (difficult) to draw conclusions based on what their numbers are in New York City. Downstate, the tests have been available. There's a number of tests people can receive. So, it's difficult for us to compare to them, but we do know that our numbers continue to go up.

“You know, if this isn't a surge, I don't know what is. And when you look at the apex, the peak, if you will, you look at it, and usually you don't find out about whether it's the peak of the apex until after that has gone through. It might be a week.

“But we do know that numbers continue to go up on a daily basis: 27 cases over this weekend. We are starting to get some testing kits available. We ordered 1,500; we received 100. We're continuing to focus on the people who need it the most: the first responders, the health care workers, the inpatients, pregnant women were just recently added. So, we look at those populations who are most at risk, and we're focusing on that right now.”

He added, “We don't have enough data now to tell us how close we may be to the peak or the plateau. We also hope, when we do get to that point, that the plateau is not a heightened plateau. We hope that it flattens out a little bit, at a much lower level than the peak. But until that happens, and until we get all the data – until we're doing enough testing – it's hard to say whether we're at that peak or not.”

Wydysh said, “Testing is still a major frustration here in Niagara County, as it is in much of Western New York and across the state, really. I think it's important for people at home to know … that I've received many emails and comments from individuals who are home. They do have symptoms; they've been in contact with their doctor, who has said that the doctor would test them if they could, but that test just isn't available.

“Please understand that Director Stapleton and I certainly have conversations daily, if not multiple times every day. We're in close contact with our state representatives, Sen. Ortt, Assemblymen Norris and Morinello, even on the phone with Congressman Higgins’ office in the area, working with them, really to open up every route that we can, and every voice that can be speaking for us and advocating to get those tests here and available. That is happening.

“This is a frustration we're feeling, and I know it's difficult when you're home and you have those symptoms to wonder what's happening, and to be worried about it. Please know that we are fighting for you in every way that we can to get those tests here, and hope to see more as soon as possible.”