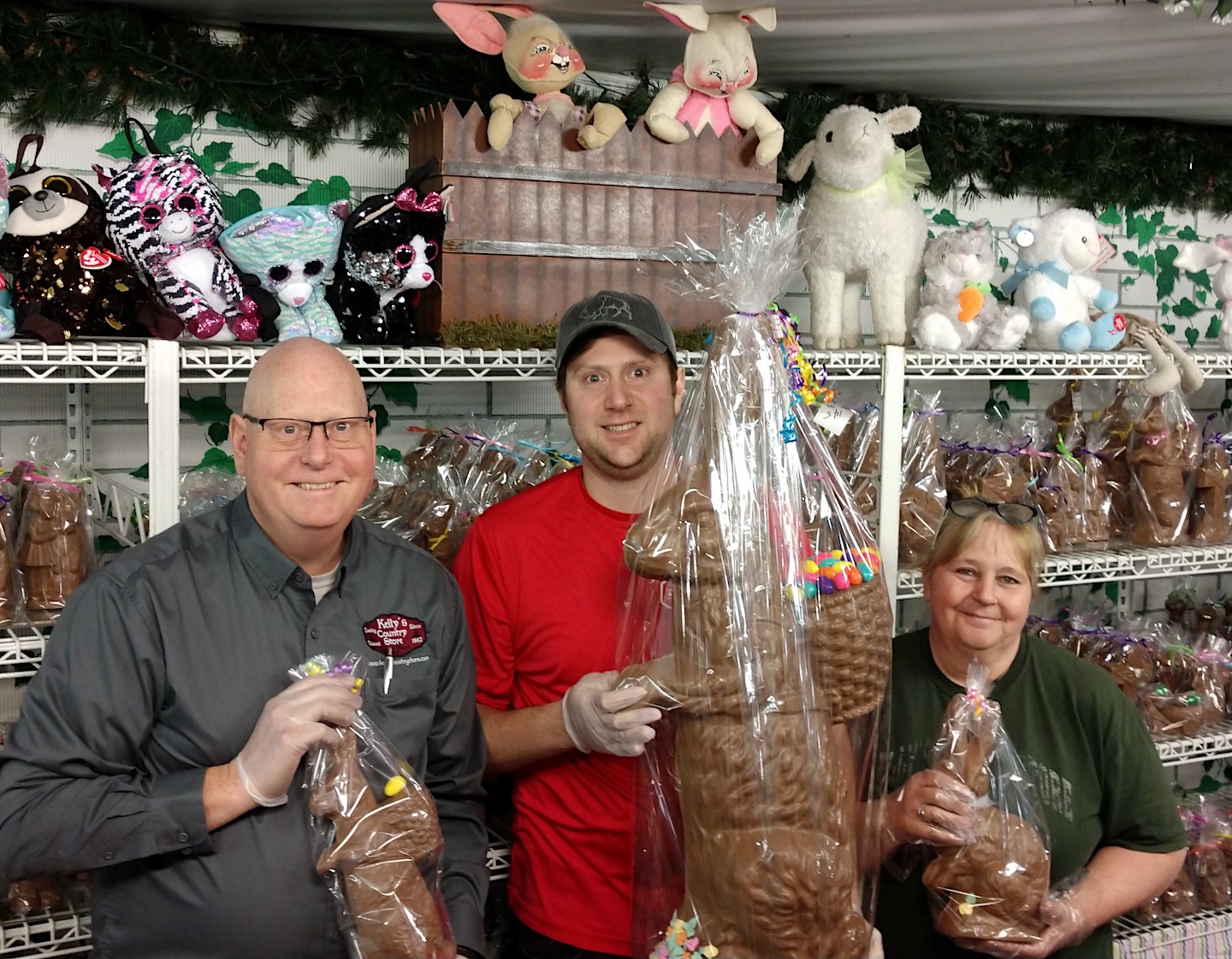 Kevin Kelly, his sister and co-owner, Maureen Knight, their mother, Deanna, his son, Adam – the business’ fourth-generation member – and relatives began producing homemade chocolate and fudge in their “chocolate factory.” It took three large kettles to fill more than 500 chocolate molds for their biggest holiday of the season – which wouldn’t come until spring.

The Kellys opened their store in 1962. A fixture on Grand Island, the family also found success in Buffalo, where they operated two stands at the famous Broadway Market.

As they were preparing for Easter, cancellations and restrictions began to be implemented statewide to slow the spread of COVID-19. On March 16, Buffalo Mayor Byron Brown announced the Broadway Market would remain open – but only for permanent tenants providing essential food items.

That didn’t include Kelly’s Country Store.

This left the four-generation, family-run business in a bind, to say the least.

“Oh my gosh, I could not believe what I was hearing. We have been at the Broadway Market for more than 30 years, and so many of our customers look forward to seeing us there,” Kevin Kelly said as he related the bleak news about the Broadway Market, where more than 50% of holiday sales are recorded.

Now, Kelly’s Country Store does sell bread, milk and other food items on Grand Island, so it is considered an essential business under the New York state guidelines, and could remain open.

“We met as a family and discussed all of our options,” Kevin Kelly explained. “Our primary goal is the safety of our employees and customers and, if we were to stay open, we would ensure that we would be socially responsible.”

He explained, “We then looked at each other and thought about all the children that have come through our doors or visited our stand over the years, and what would it be like for them to wake up on Easter Sunday and not have an Easter basket full of candy. As is our custom, we work directly with the Easter Bunny to make kids and families happy, so we decided we would change the way we do business for this Easter season.”

Kelly’s Country Store is open 9 a.m. to 9 p.m. daily, through Saturday, April 11. The staff has completely cleaned every inch of the store and will continue to do so daily. Moreover, they only will allow 10 customers into the building at a time, ensuring patrons are at least six feet apart from each other. Staffers also will wear gloves.

Sadly, the Easter Bunny will not be available for pictures this year.

“Our hearts go out to everyone who has been affected by this horrible pandemic, or has suffered a job loss or, worse, has been forced to close their business because of it,” Kevin Kelly said. “We can only hope and pray this comes to an end quickly, and it is our goal to help families continue a lifetime tradition of enjoying homemade Easter candy during what will certainly be a different Easter Sunday for everyone.”

Since this news broke last weekend, Kelly’s County Store has been overwhelmed with online and telephone orders.

The store, located at 3121 Grand Island Blvd., is open until 9 p.m. Friday and from 9 a.m. to 9 p.m. Saturday. The family plans to collapse for a well-deserved rest on Easter Sunday.

“We cannot thank our loyal customers enough, especially so many of them on Grand Island for supporting us when we initially thought we would lose everything we had been making since Christmas,” said Kevin Kelly, whose grandparents Walter and Grace, and his dad, Michael, opened this holiday destination in 1962.