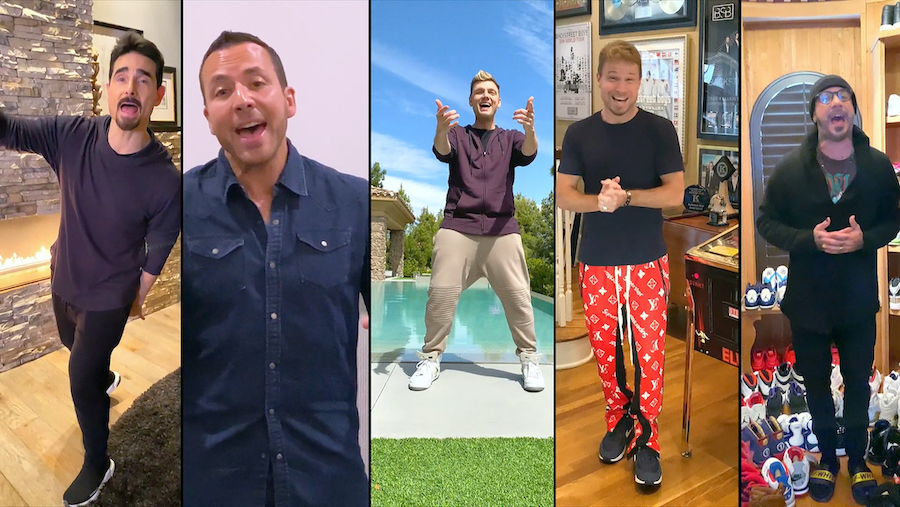 The Backstreet Boys (from left: Kevin Richardson, Howie Dorough, Nick Carter, Brian Littrell and AJ McLean) perform during the "FOX Presents the iHeart Living Room Concert for America," a music event to provide entertainment relief and support for Americans to help fight the spread of the COVID-19 virus and to celebrate the resilience and strength of the nation during this pandemic. (Photo ©2020 Fox Media LLC/Cr: FOX)

Sunday night’s broadcast of the benefit special “FOX Presents the iHeart Living Room Concert for America” brought viewers together to thank first responders and medical workers on the front lines, and to celebrate America’s everyday heroes. The event raised money to support two charities that are doing critical work during these challenging times: Feeding America and First Responders Children’s Foundation. The one-hour special was created to help fight the spread of the COVID-19 virus and to celebrate the resilience and strength of the nation during this pandemic.

The benefit special raised $10 million (and counting) for Feeding America and First Responders Children’s Foundation. This is thanks to the generosity of fans, as well as corporate partner Procter & Gamble, which donated $500,000, and which Fox Corporation matched. Additionally, FOX employees raised funds in support of the cause, as did corporate partner PwC.

YouTube, which also made a donation in support of the cause, is streaming “FOX Presents the iHeart Living Room Concert for America” through Wednesday at 10 p.m. ET on iHeartRadio’s YouTube Channel.

“Our goal from the start was to ‘do good’ at a tough time in the world. And that we were able to accomplish anything of that sort is because of the amazing artists who participated in this event, our producing partners, iHeart Media, and the outpouring of support from our employees, viewers and corporate partners,” said Charlie Collier, CEO, FOX Entertainment. “Many thanks to everyone involved with the production of this special and everyone who gave generously to the wonderful charities. It is they who support the really important work happening across our communities.”

In addition to airing on FOX, the special ran on iHeartMedia radio stations nationwide, via the iHeartRadio app; and is streaming on YouTube both domestically and globally until Wednesday, April 1. To extend the reach of the commercial-free special’s charitable component, FOX also offered the event across all of its linear and digital platforms, including FOX.com and the FOX NOW app. FOX will air an encore of the special Monday, April 6 (9 p.m. ET/PT).

The “FOX Presents the iHeart Living Room Concert for America” delivered 8.7 million viewers and a 2.0 Live + Same Day aggregate rating among adults 18-49 across all of FOX’s linear properties, including FOX Network, FOX News, FOX Business, FS1, FS2 and FOX Deportes. It added more than 700,000 starts and 8 million minutes viewed across FOX’s digital properties. On FOX, it delivered a 1.5 live + same day rating and 5.5 million viewers, making it the No. 1 and most-watched iHeart Radio special ever (excluding awards shows) and this year’s No. 1 Sunday entertainment telecast (excluding post-NFL and award shows) among adults 18-49 (tie) and adults 18-34.

Donations will continue to be accepted via the Internet at Feeding America and First Responders Children’s Foundation.

The hourlong concert also featured inspirational messages from guests, as well as special appearances from Ken Jeong, Ciara and Russell Wilson, Ryan Seacrest, Melissa McCarthy and Ben Falcone, Lady Gaga, Lizzo, and Ellen DeGeneres, as the benefit special paid tribute to the front-line health professionals, first responders and local heroes who are putting their lives in harm’s way to help their neighbors and fight the spread of the virus.