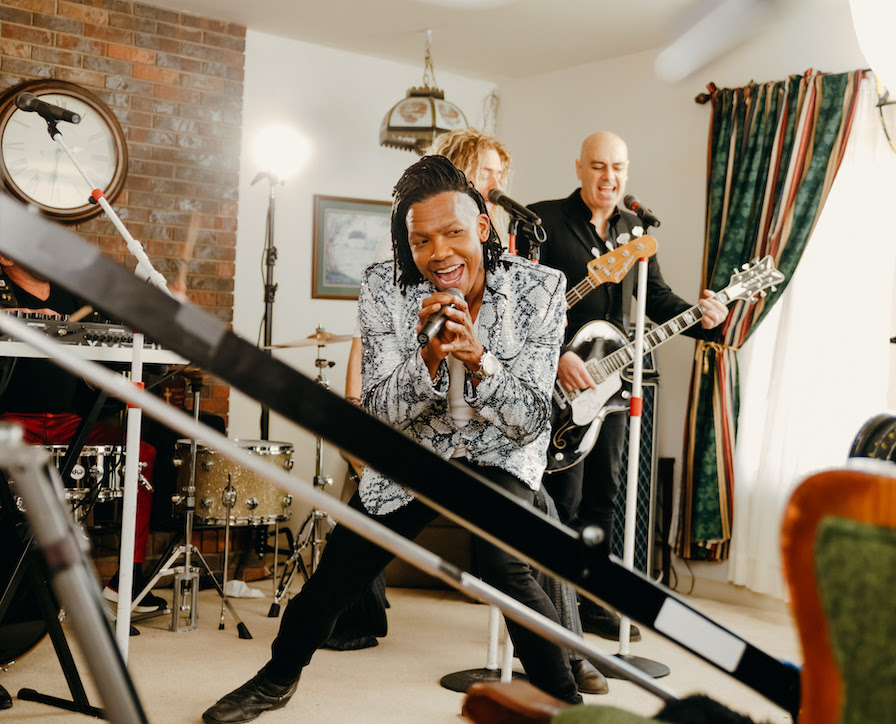 On the set of Newsboys' "Love One Another" music video. (Photo credit: Caleb Cook/courtesy of Turning Point PR)

Newsboys deliver hope and humor with 'Love One Another' music video

Premiering last week via KLOVE.com, the video was filmed on location around Nashville and finds Newsboys at a birthday party, in the grocery store, on the basketball court, and in an office – among other locales – encouraging others to put their faith into action by loving one another, no matter the circumstance. “Love One Another” also showcases numerous cameos, including former Audio Adrenaline and Stellar Kart frontman Adam Agee; various members of Newsboys’ management and crew; and the children of bandmembers Joel, Duncan Phillips, Jeff Frankenstein and Jody Davis.

“We hadn’t shot a video in a while and thought it’d be great to do one with Peter and Phil,” Frankenstein said. “We’ve been together touring Newsboys United the last couple of years and we’re having a blast. Now, with the situation our world is facing, we realize the message of loving and being there for each other is even more timely. It’s our hope the video will be a reminder of what's important, while also offering a much-needed laugh in this difficult time. In our country and around the world, we need to look after each other. There’s a lot of uncertainty right now and, while we don’t know what’s ahead, we do know with certainty that God is ultimately in control.”

Hsu was asked by Frankenstein to direct the “Love One Another” clip, and he readily caught the band’s vision.

“When Jeff called me about making the video, he said he wanted people who hadn’t gotten to see the tour to experience the energy of the Newsboys United members all together,” Hsu said. “As a longtime Newsboys fan, I still remember having my mind blown at their live shows -when they came out of the ceiling on their flying saucers – and I wanted to try to recapture that crazy energy. Being a songwriter myself, I thought the message about love across dividing lines couldn’t be more important or timely.”

“On the first day of shooting, we filmed the scene in the grocery store where the band comes around the aisle – it was something the guys made up on the spot,” he added. “When the crew and I recovered from our fits of laughter, I knew then that the video was going to work.”

“Love One Another” is featured on Newsboys’ 2019 FairTrade Services set, “United.” Showcasing the historic six-member lineup of Michael Tait, Furler, Phillips, Joel, Frankenstein and Davis, the album debuted at No. 1 on Billboard’s Top Christian Albums chart. A 10-song collection of compelling praise and worship moments and pop tracks, “United” was produced by Furler and Geoff Duncan.

One of the most influential bands in Christian music history, Newsboys have sold more than 10 million units, amassed eight Gold certifications, 33 No. 1 radio hits, four Grammy nominations, two American Music Award nominations and multiple Dove Awards. Since their formation in Australia three decades ago, Newsboys have released 24 recordings and their signature songs include “We Believe,” “He Reigns,” “Miracles,” “Born Again” and the Platinum-certified megahit, “God’s Not Dead.”