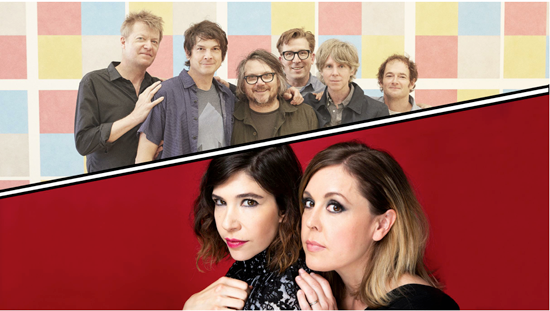 Wilco & Sleater-Kinney co-headline 'It's Time' Tour, with stop at Artpark

Wilco and Sleater-Kinney announced their “It’s Time” summer 2020 co-headlining tour. After their respective North American and European runs in support of last year’s “Ode To Joy” (out now on dBpm Records), Wilco will return stateside, closing out each night of their co-headlining tour with Sleater-Kinney, who just closed out their “The Center Won't Hold” Tour.

The entirety of this tour will be made up of outdoor amphitheaters and venues, including a show in Wilco’s hometown of Chicago at Millennium Park’s Pritzker Pavilion, Nashville’s Ascend Amphitheater and Colorado’s Red Rocks Amphitheatre.

Wilco and Sleater-Kinney will visit the Artpark Amphitheater at 6 p.m. Thursday, Aug. 27, as part of the “Coors Light Concerts” series presented by Artpark and Funtime on Support act NNAMDÏ will open the show. Tickets go on sale at 10 a.m. Friday, March 13.

Advance front-of-stage tickets are $65, while advance general admission bowl tickets are $55. Prices increase by $5 the week of the show. No chairs will be permitted.

This concert event with Wilco and Sleater-Kinney joins these previously announced concerts in the “Coors Light Concert” series: Rancid and Dropkick Murphys (May 24), AWOLNATION with Andrew McMahon (May 31), Joe Russo’s Almost Dead (June 19) and “Saints and Sinners Tour” with Big Wreck, Headstones, Moist and The Tea Party (July 16).