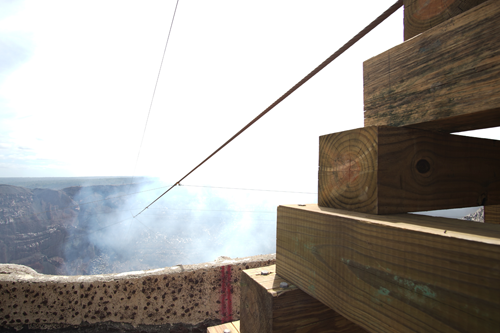 A look at the wirewalk setup for "Volcano Live! with Nik Wallenda." (ABC photo by Jeff Daly)

Daredevil Nik Wallenda, seventh generation of the Great Wallendas, will return to the highwire for a daring 1,800-foot-long walk over the active Masaya Volcano in Nicaragua. “Volcano Live! with Nik Wallenda” will air as a live two-hour special beginning at 8 p.m. EST. This will mark his longest and highest highwire walk ever attempted – and make him the first person to embark on a walk over the famed volcano.

Part of the famed “Pacific Ring of Fire,” Masaya encompasses multiple craters and is one of very few volcanoes to possess a lava lake. The extreme environment at Masaya will add an extra set of risks to Wallenda’s already daring walk. Throughout the televised event, he and his family will be featured in interviews about the rigging, planning and execution of the walk. Volcanologists and various professionals will also be on-site to lend their expertise.