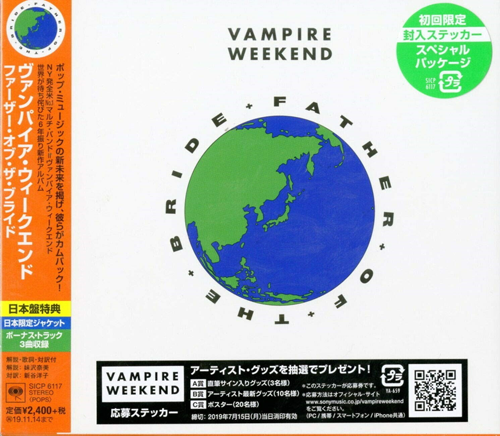 Vampire Weekend has released three songs in accompaniment to their Grammy Award-winning album “Father of the Bride.” These bonus tracks were originally released exclusively on the physical Japanese CD and were not available digitally until now.

Last month, Vampire Weekend took home the Grammy for Best Alternative Music Album for “Father of the Bride.” The band’s fourth album was released on May 3 via Columbia Records and quickly became the third Vampire Weekend album in a row to reach No. 1 on the Billboard 200. “Father of the Bride’s” first week sales of 138,000 marked the highest single week sales of the band’s career, including 20,000 vinyl copies, putting the LP at No. 1 on the vinyl chart by a large margin – not to mention No. 1 debuts on the album sales and internet sales charts.

Fans can catch Vampire Weekend on tour and at select festivals beginning next week. The band will bring their widely renowned live show to North and South America and Europe before wrapping in October.

Vampire Weekend’s “Father of the Bride Tour” will make a stop at the Artpark Mainstage Theater in Lewiston at 7:30 p.m. June 2. Visit www.artpark.net for tickets.