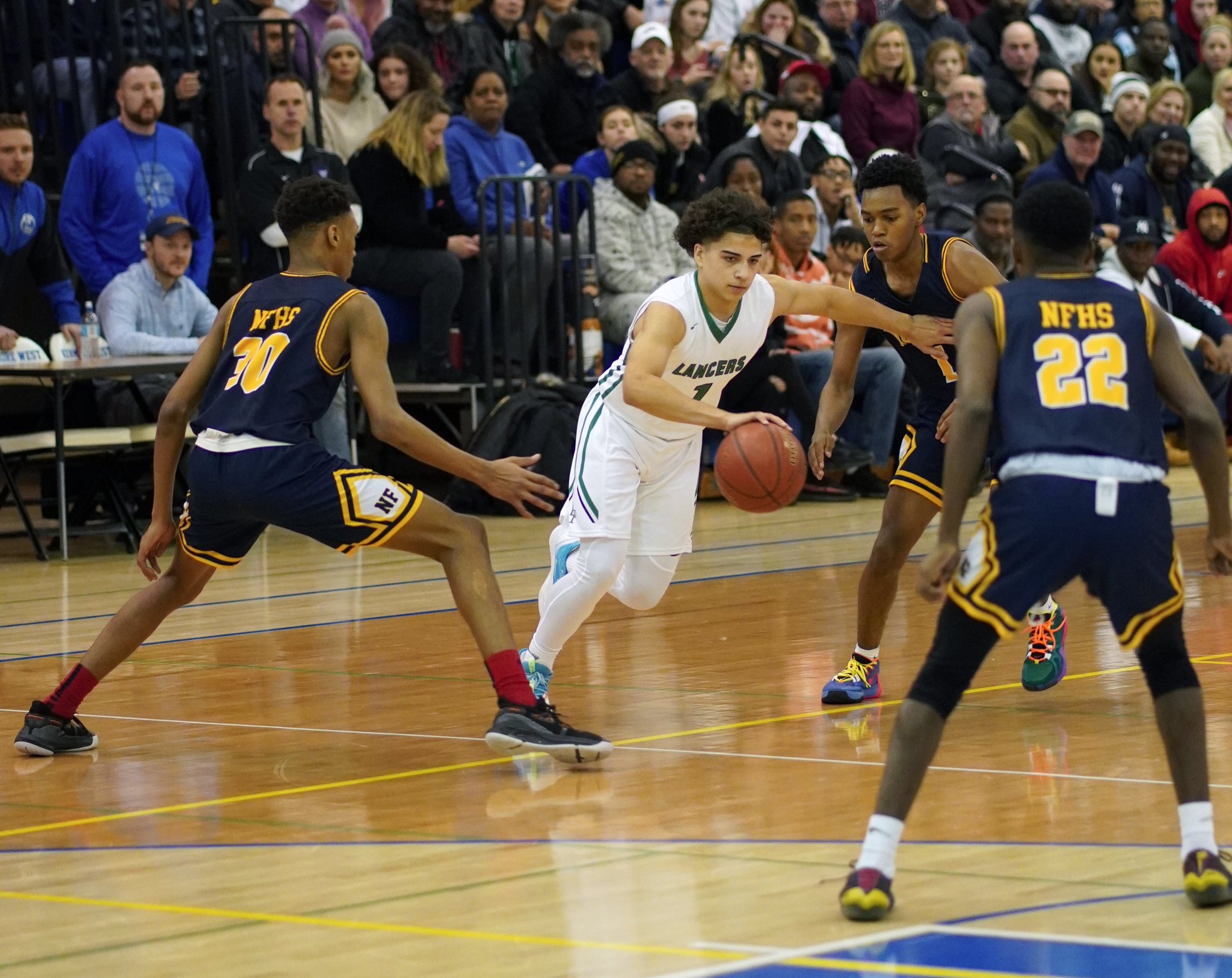 Over the last two seasons, the Lewiston-Porter Lancers boys basketball team have accomplished great feats going a combined 33-12 and won the Niagara Frontier League and Section VI Class A titles.

Accomplishments and accolades take hard work, talent and success to achieve. While the Lancers feature star sophomore Roddy Gayle, there’s another player wearing the Kelly green and white who has been a huge piece to the L-P squad … and he’s just a freshman.

Jalen Duff has taken the role of point guard for the last two seasons under coach Matt Bradshaw’s squad and, in just two years, the two-year varsity guard has stood out for the Lancers.

As an eighth grader, Duff was asked a lot at such a young age. He took over as the starting point guard and shined along with players like Gayle, Trent Scott and Zach Clayborne. His 12 points per game and range from behind the arc, to go with three rebounds, assists and steals per game helped the Lancers make it as far as the team did in 2018-19.

In 2019-20, with Scott and Clayborne departed, Duff was asked to continue running point and have a bit more influence in the offense, and the freshman has come through.

In his second varsity season, Duff has posted 18 points per game, including 45% from 3-point range, and five rebounds and assists per game. Bradshaw and Duff himself have noticed growth in his play from year one to year two.

“I feel like I’m expanding more with passing and getting my teammates more involved,” Duff said. “Last year, it was shooting and playing some defense, but, this year, I feel like, overall, everything is getting better.”

Bradshaw added, “A ton (of growth). He moves better without the ball, he’s finding open areas of the floor to shoot and defensively he’s getting a little better.”

Many people that watch the Lancers play on a nightly basis know the talents of the high-flying Gayle, who has amassed a plethora of college basketball offers in his three years of varsity action. While most teams attention gleams towards Gayle, though, it creates opportunities for Duff.

“I feel like he brings all that attention and other people can get a spotlight, because they’re all looking at him,” Duff said. “Since we’re on the court, they can see how we play together, though.”

This season, there was a stretch of three tough games where Gayle was out due to injury. In the games, the Lancers went 1-2 facing Niagara Falls, Aquinas and Grand Island.

In the game against the Falls, the Wolverines were heavy favorites without Gayle on the court. Despite that fact, Duff scored 23 points in a close four-point loss. Additionally, the freshman helped keep things close versus Section V Aquinas and assisted in the win over Grand Island.

During the stretch where the Lancers were Gayle-less, Duff took over as the focal point of the offense. Despite some added pressure, the youngster took the challenge stride for stride.

“He’s only in ninth-grade, and I think people forget sometimes that he’s only a freshman. But he held the ship on course when Roddy was out with his injuries. He just keeps getting better every game,” Bradshaw said. “Jalen is so used to being ball-dominant, because he’s played the point his entire life. When you have Roddy out there, you can now give up the ball and go find an open spot and Roddy will find you. So playing off Roddy has been a process for him. Both of them playing off each other has been a process, but I think it’s started to click.

Duff added, “There was a little more pressure, because he usually does a lot of the scoring, but we had to pick it up since he wasn’t here and I felt like we did that good.”

Anyone that has played basketball knows that the point guard position takes a lot of time, skill and confidence to manage. Even at a young age, Duff has been working to play the position majority of his life.

“He’s played point guard his whole life, so he’s kind of been groomed for this,” Bradshaw said. “His dad has been working with him since he’s been in kindergarten. His dad rides him, his dad pushes him and he handled the point for us as an eighth grader on our way to states. But he’s done a hell of a job for us.”

Duff mentioned games from his first varsity season that he said groomed him for his second season.

“Last year got me prepared for this stage,” Duff said, as he mentioned last year’s regular season game versus Niagara Falls, where the gym was packed hours before tip-off and played in front of an electric atmosphere. “I feel like that took a little pressure off since I’m used to it now.”

For the 2019-20 season, Duff said there’s only one reason why he’s having the success he’s having.

“Working every day,” Duff said. “We go (shoot around) in the morning on game days every time to get some extra shots up. After practice we work hard, we work hard during practice. We just stay together and work hard.”

Moving forward, Duff still has three more high school seasons to go. In that time, he expects a lot out of himself and the team.

“I just want to get better and get some (college) offers, help my teammates get better and, overall, just be a better team,” Duff said.

The freshman point guard and the Lancers finished the season 12-8 following a loss to Niagara Falls in the NFL title game. The team now sets its focus on the Section VI playoffs, where the Lancers look to defend its Class A title from a season ago.

The No. 3 seeded Lancers next matchup is versus the winner of South Park and Pioneer. The home quarterfinal battle begins at 1 p.m. Saturday, Feb. 29.