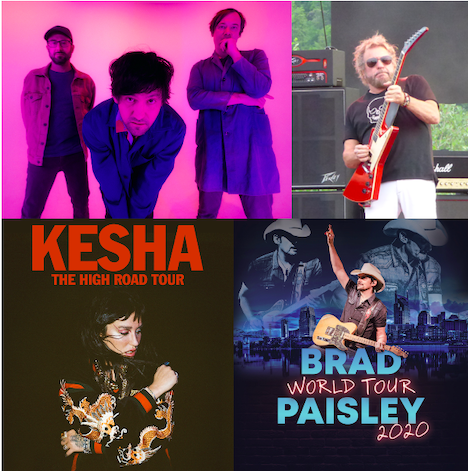 A slew of big-ticket concerts were announced on Tuesdays. They include:

Bright Eyes with special guest Lucy Dacus will perform at the Artpark Mainstage Theater on Sunday, June 14. This concert is a Funtime Presents event. Indoor reserved tickets ($46-$102) will go on sale at noon Friday, Feb. 21.

Bright Eyes are back after a nine-year hiatus. Conor Oberst, Mike Mogis and Nathaniel Walcott regrouped to record and tour in 2020. The band, whose previous nine albums were critically and commercially successful, last released an LP, “The People’s Key,” in 2011. That was followed by a remastered box set collection of its work in 2016.

Newly signed to indie label Dead Oceans, the acclaimed trio returned to the studio in 2019 to quietly begin work on new material.

Tickets will be available online at tickets.com and artpark.net, by phone at 1-888-223-6000, or in person weekdays at the Artpark box office, 450 S. Fourth St., Lewiston. Listed ticket price includes facility fee; additional service fees apply for online and phone orders.

The air may still be cold, but things are heating up at Seneca Niagara Resort & Casino with the announcement of three blockbuster shows.

The Seneca Niagara Event Center will welcome Motown legends The Temptations and The Four Tops at 8 p.m. Friday, May 8; “Seneca Fight Night” presents All Star Boxing at 7 p.m. Friday, May 22; Sammy Hagar & The Circle, Whitesnake and Night Ranger arrive for an outdoor concert at 7 p.m. Saturday, July 25. Tickets go on sale at noon Friday, Feb. 21.

The Temptations and The Four Tops are two of the most celebrated vocal groups in American music. Together, they helped to define the Motown sound of the 1960s and 1970s. The Temptations delivered hits including “My Girl,” “Just My Imagination (Running Away with Me),” “Papa Was a Rollin’ Stone” and “Ain’t Too Proud to Beg,” while The Four Tops left their mark on the all-time music charts with hits “I Can’t Help Myself (Sugar Pie, Honey Bunch),” “It’s the Same Old Song,” “Baby I Need Your Loving” and “Reach Out I’ll Be There.” Both groups were inducted into the Rock and Roll Hall of Fame, have received the Grammy Lifetime Achievement Award, and were included in Rolling Stone magazine’s list of 100 Greatest Artists of All Time. Tickets start at $45.

“Seneca Fight Night” brings the excitement and power of professional boxing back to Niagara Falls. Some of the top talent in the sport will face off throughout an evening of nationally televised toe-to-toe battles. This anticipated event is a part of the Boxeo Telemundo series and promises to deliver a knockout of a night with a mix of established veterans and up-and-coming talent. Tickets start at $35.

Sammy Hagar & The Circle have taken the rock world by storm since forming in 2014. Featuring the all-star line-up of Hagar, bassist Michael Anthony, drummer Jason Bonham and guitarist Vic Johnson, the group is known for exciting live performances. Shows feature original songs and hits from their respective careers as solo artists and with groups Montrose, Van Halen, Sammy Hagar and The Waboritas, and Led Zeppelin.

Whitesnake has been rocking worldwide audiences since 1978. The band exploded to superstardom with the release of its eponymous 1987 album, fueled by hit songs “Here I Go Again,” “Is This Love” and “Still Of The Night.”

Joining them will be Night Ranger, who had a string of Platinum albums in the early 1980s, punctuated by the hit singles “Sister Christian,” “When You Close Your Eyes” and “Sentimental Street.”

Tickets also go on sale at noon this Friday.

Candlebox was formed in Seattle in 1990 and found immediate success with their self-titled debut album in 1993. The band’s biggest hits include “You,” “Far Behind,” “Change” and “Cover Me.” Candlebox has released six studio albums to date, and the band is currently working on plans for a seventh album. Tickets start at $55.

Motown Extreme is a one-of-a-kind revue show that captures the sounds, sights and magic of some of the greatest music ever recorded. The high-energy performance includes songs from such legends as The Jackson 5, Martha Reeves, Smokey Robinson, Stevie Wonder and Diana Ross & The Supremes. Tickets start at $45.

Felix Cavaliere’s Rascals have spent more than half a century performing, recording and entertaining fans around the world. Starting with The Rascals’ first mega-hit, “Good Lovin,’ ” the group blazed a trail straight to superstardom and a seemingly permanent place near the top of the charts. Other hits from across Cavaliere’s career include “I’ve Been Lonely Too Long,” “Groovin,’ ” “How Can I Be Sure,” “A Beautiful Morning” and “People Got to Be Free.” Enjoy the songs that helped propel Felix Cavaliere into the Rock & Roll Hall of Fame, Songwriter Hall of Fame, Vocal Group Hall of Fame, and the Grammy Hall of Fame. Tickets start at $55.

Belinda Carlisle has achieved worldwide fame and success as one of the leading female artists of all time. She was the lead singer of the Go-Go’s, one of the most successful all-female bands ever, and the first to score a No. 1 album while writing original songs and playing instruments. The band’s era-defining hits include “We Got the Beat,” “Our Lips Are Sealed” and “Vacation.” After leaving the Go-Go’s, Carlisle launched a successful solo career with such hit singles as “Heaven Is a Place on Earth,” “Mad About You” and “I Get Weak.” In addition to her music career, Carlisle published a successful autobiography, “Lips Unsealed,” which was a New York Times Best Seller in 2010. Tickets start at $65.

Construction on this theater began in the fall of 2017, with the goal of making Niagara Falls the entertainment destination of choice. With the finishing touches almost complete, this long-awaited Entertainment Centre will host its first performers this April.

The Entertainment Centre is an all-ages venue (under 12 with an adult) located in the Fallsview tourist district directly across from Fallsview Casino Resort. It is easily accessible by an indoor walkway.

"Our new theater is a welcomed addition to our portfolio of world-class venues and will be the Canadian home for top name artists and events. As one of the leading producers of live entertainment today, MGE is excited to export what we do best, including a powerhouse lineup starting in April,” said Tom Cantone, president of MGE Entertainment Worldwide.

Selected by Ontario Lottery and Gaming, Mohegan Gaming & Entertainment has been operating in Niagara since June 2019. With more than two decades of experience creating top entertainment destinations, MGE focuses on developing “the ultimate customer experience.”

A press release said, “Collaborating with the OLG, Mohegan Gaming & Entertainment, Niagara Casinos and various stakeholders, this was truly a community effort that will bring energy and excitement to downtown Niagara Falls.

"This will be a world-class facility that performers will want to perform at and audiences will want to experience", said Niagara Falls, Ontario, Mayor Jim Diodati. "With superior sound, sightlines and designs to make the experience memorable, we anticipate more than 1 million additional visitors to our city to see acts and performances here. This means more good jobs are coming to our community, and that restaurants and attractions will be busier as well. To say we are excited would be an understatement!"

"For decades, the partnership between the OLG and Niagara Casinos has been collaborative and innovative. Joining forces with Mohegan Gaming & Entertainment continues to take the entertainment industry to the next level in Niagara," said Lori Sullivan, OLG's chief operating officer. "There is a wealth of knowledge within these partnerships, and we look forward to the new Entertainment Centre seeing great success."

The Riviera Theatre presents The Tubes & Special Guest: Tony Lewis (from The Outfield) at 8 p.m. Saturday, Sept. 12, as part of its “Headliner” series. This show replaces the original Tony Lewis concert, scheduled for Thursday, March 5.

The Tubes, The San Francisco band that helped pioneer theatrics in rock ‘n’ roll long before MTV and music videos made it fashionable, will embark on a national tour. For the first time, they will perform their hit 1981 album, “The Completion Backward Principle” – their first for Capitol Records, and produced by Grammy-winner David Foster – in its entirety.

Lewis, a musician, songwriter and record producer, is best known as co-founder of The Outfield. Together with John Spinks, the two took the ’80s by storm with their infectious pop songs “Your Love,” “All the Love” and “Say it isn’t So.” Their debut album, “Play Deep,” was issued in 1985 and would go on to reach triple-Platinum sales status and Top 10 placement on the U.S. album charts. “Your Love” peaked at No. 6 and is still featured in a number of compilation albums and commercials. It has been covered or remixed over 1,000 times by other artists.