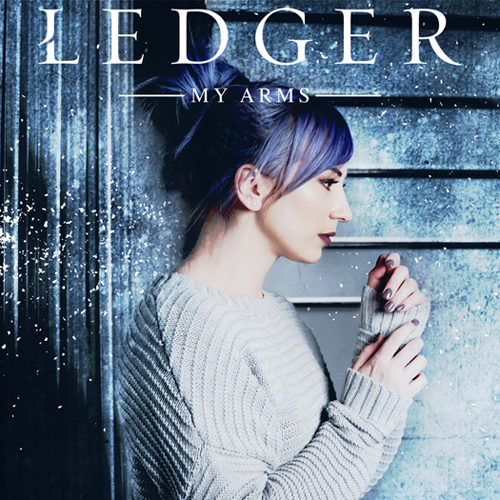 Jen Ledger is feeling the love on Valentine's Day as her new single, "My Arms," impacts Christian radio and all DSPs today. The track, already top 20 on CHR at No. 19 and gaining key adds at AC each week, is her third single since her debut, self-titled EP “LEDGER” (Atlantic, Hear it Loud).

The EP was the highest debut on Billboard's top Christian albums chart, hitting Top 5 on the rock chart, as well as No. 2 on iTunes rock albums chart and No. 7 on iTunes overall albums chart.

About "My Arms," Ledger commented, "Sometimes we face things that just feel impossible. The burden feels too heavy, and we just don’t think we have the strength to go on. The beautiful thing is, that in the places where we don’t know how to move forward – he knows the way ... and when we don’t have the strength to stand, he has all the strength we need! Sometimes God allows us to face seasons that we are not meant to go through alone. Like Moses arriving at the Red Sea – sometimes we need a miracle ... and that’s where God loves to display his glory and strength in our lives. In our weakness he is strong, and his grace is sufficient in every season. We never have to face anything alone in this life. With an almighty God at our right hand helping us – a heavy burden becomes light."

To hear her talk more about the story behind the song, click here.

Currently on the road with Skillet for the "Victorious Tour," Ledger is opening the show each night with her band LEDGER. The tour also features From Ashes to New. Kicking off last weekend in Wichita, Kansas, the tour will run through March 14. For all tour details, click here.

Following LEDGER's 2019 nationwide trek as a part of the blockbuster lineup featured on "The Winter Jam Tour Spectacular," Ledger most recently joined Grammy Award-winning artist TobyMac to open the 50th Annual Dove Awards with a performance of his reinvented version of "The Elements." Ledger is a guest vocalist on the track, which is featured on Toby’s “The St. Nemele Collab Sessions.”

Ledger's unique vocals and powerful stage presence have given her a distinct role in Skillet since joining as the band's drummer when she was just 18. Ledger has had the privilege of being a part of Skillet as they have cemented their place as one of the 21st century’s most successful rock bands, selling more than 11 million units worldwide, receiving two Grammy Award nominations and winning a Billboard Music Award for the multi-Platinum-certified “Awake.”

Get connected with LEDGER: