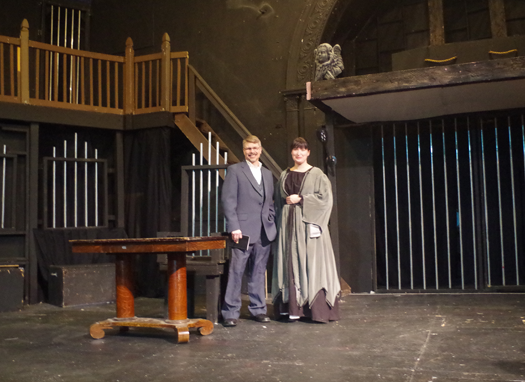 The Ghostlight Theater will present “Nosferatu: The Legend of Dracula” at a variety of showtimes from Feb. 13-23 at 170 Schenck St., North Tonawanda.

Part of the 20 -year-old tradition for a classic in February, the play is just one piece of a lineup of productions such as “Tom Sawyer,” “Frankenstein” and “Little Women,” which have all been presented by the theater in past years.

The play is faithfully adapted from the Bram Stoker novel as written by L. Don Swartz with the exception of one compelling point: Professor Van Helsing, the leader of the group hunting Count Dracula, will be played by a woman.

“Put the smartest person there, make it a modern woman,” Swartz said. “Dracula doesn’t know what he’s dealing with. … (There’s) this idea that he doesn’t know how to get them. He’s been alive for 500 years, he has his brides in the castle, and he understands men, but he doesn’t understand the modern woman and that’s his downfall.”

Swartz noted 1897 was the year Dracula was written, coinciding with the timeline of the women’s suffrage movement. Women were, he said, were realizing they were due rights and to incorporate that into a play is “fresh” yet, it seems to be “just a little switch.”

“It doesn’t lose the story. It was all kind of there,” Swartz said.

The Ghostlight Theater recently celebrated 19 years in the church on Schenck Street. The congregation had moved out and left it vacant for about a year, Swartz said.

“They were trying to sell it, and we came around and said, ‘We’ll take it! We don’t have much, we have nothing really, but we’ll take it,’ ” he said. “And we did, for a dollar! There was no roof; the roof was bad; the heat was bad, so we had to put a lot into it, but they were very gracious and said, ‘OK, you can have a church.’ Nineteen years we’ve been here.”

The stage boasts balconies on both sides, doors, trapdoors and backdoors, all adhering to a “superstructure” the group had built, making a strong impression on the audience.

“Each play conforms to this superstructure,” Swartz said. “Sometimes we don’t use up there (the balconies), but I don’t like to not use up there, because it’s so wonderful, but sometimes you just got to put a teaser up and just do a box set.”

When it comes to what kind of plays the Ghostlight presents, Swartz said there is a certain chronology that corresponds to the seasons in this theater.

“One thing that we’ve done – and a lot of groups haven’t done – every February we do a winter classic,” Swartz said. “What the audience loves and we love is adapting the classics. We have a whole series now. I adapted ‘Frankenstein,’ ‘Dracula,’ ‘Tom Sawyer,’ ‘Little Women,’ ‘Hound of the Baskerville,’ ‘The Works of Edgar Allen Poe’ and ‘Sleepy Hollow.’ ”

“The winter classic is not our highest attender, but nobody does literary classics and we’ve just done them for the past 20 years,” Swartz said. “We have some more stacked up. We’re asking, ‘What do you want us to look at?’ They’re public domain. It costs nothing to adapt, and what I love about the winter classics is when we do our own twist on a literary piece.”

“We do five mainstage shows a year. Seven shows a year with our fundraisers,” he continued. “In the spring you’ll see a comedy, in the winter you get a winter classic, in the summer you’ll have a musical, in the fall it’s a thriller, and in December you’ll have a Christmas show. It follows the old, ancient Greek. That’s their theater seasons. Summer was romance, so a musical. … Winter was irony – the classics – so, we’re following something very old.”

Swartz talked about the origins of the Ghostlight Theater prior to the acquisition of the church and its renovation as a theater.

“We always wanted our own place, so if we want to stay all night, which we don’t … but after 9 p.m. and the janitor is there and shakes his keys, you got to get out … it doesn’t matter. You got to get out.”

Most importantly, Swartz said, is the community support that comes out year after year.

“We’ve had some people who’ve been 40-years members, they come to see the plays,” he said. “(And the players) there’s a nice mix of old and new, so many have been here right along for the past 20 years with these. Daniel (Baker) and Chris (Fire) have played Dracula and Harker, they’ve played Frankenstein and the monster, they’ve played in ‘Treasure Island,’ Long John Silver and Jim Hawkins. The two of them, the two actors have been a staple of the winter classics.”

The cast features Baker as Count Dracula, Vanessa Stipkovits as Professor Van Helsing, Fire as Jonathan Harker and Amanda Woomer-Limpert as Mina Harker, amongst others.

L. Don Swartz has been writing exclusively for the Ghostlight Theater since 1982 and has published 30 plays produced in nine counties. This adaptation graced Ghostlight in 2000 and has been published and produced by theater groups in 25 states and across Canada. Swartz will also be playing the part of Renfield, the asylum patient who eats spiders.

His son, DJ Swartz, is the director for this presentation of “Nosferatu: The Legend of Dracula.”