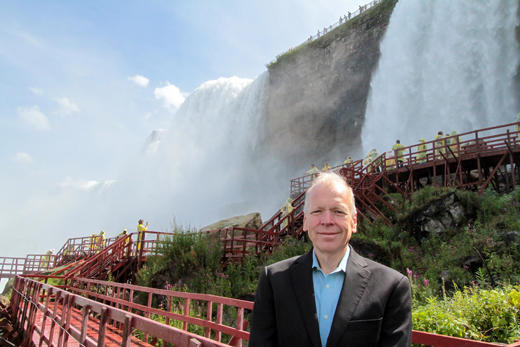 Tim Clark at Niagara Falls, one of the WNY areas he's promoting to film companies. (Image courtesy of All Services WNY)

The Association of Film Commissioners International (AFCI) announced Tim Clark, film commissioner for the Buffalo Niagara Film Office, will serve as AFCI’s first newly elected board chair since 2016. Clark joined the AFCI board in 2018 and served previously as second vice chair. His new tenure as chair is set for a two-year term that may be renewed in 2022.

Clark has led the Buffalo Niagara Film Office for more than a decade, overseeing production in Western New York.

"It’s a privilege to serve the members of AFCI as board chair,” Clark said. “AFCI represents more countries than ever before and I am committed to ensuring that members get the education, industry connectivity and guidance they need in our ever-changing industry; and I look forward to working with AFCI President Jess Conoplia. However, while I am appreciative of the appointment, the true accolades go to the people of Western New York who have made the Buffalo Region such a film-friendly location and truly special to those from Hollywood and beyond. Plus the timing of being named chairman coincides with Cineposium 2020, which is a really big international event for film commissioners coming to the Buffalo and Niagara Falls regions in the third week of September.”

Erie County Executive Mark Poloncarz said, “The film industry has become an important part of the economy of Erie County and the entire region, and having Tim Clark, the Buffalo/Niagara Film commissioner, as chairman of an international organization such as the AFCI will only help that growth. The Buffalo/Niagara Film Office has been successful in bringing in filmmakers thanks to the available tax credits and they, in turn, hire local workers, spend money on lodging, food service and supplies. The appointment of Tim Clark as chairman of the AFCI recognizes the success we have had in bringing film and television productions to Erie County."

Buffalo Mayor Byron W. Brown said, “As Buffalo Niagara Film commissioner, Tim Clark has delivered positive results time and time again when it comes to supporting quality film productions in Buffalo and Western New York. As chair of The Association of Film Commissioners International Board, I know Tim will continue to champion significant growth of the film industry locally and globally.”

President and CEO of Destination Niagara USA John Percy said, “The appointment of Tim Clark as chairman of the Association of Film Commissioners International is a great boost to the growing film industry here in the Niagara Region. Niagara Falls has always been attractive to filmmakers, but, through the efforts of the Buffalo/Niagara Film Office and Commissioner Tim Clark, more and more movie and television crews have taken advantage of the beauty of Niagara and the benefits of doing business in Western New York. Clark's role with the AFCI has already brought Cineposium 2020 here in September and now being named chairman will only help spread the word of the wonders of Niagara."

Conoplia said, “I look forward to working with Tim, because he understands our global vision and supports our focus on best practice for the screen sector. I’ve seen first-hand his ability to get things done – both locally and abroad – and I’m delighted that we’re bringing AFCI’s 44th Annual Cineposium Conference to Buffalo Niagara in September under his watch.”

Founded in 1975, Association of Film Commissioners International is the only global nonprofit professional organization representing city, state, regional, provincial and national film commission members on six continents. An affiliate membership program enables production companies and businesses servicing the production community to also be a part of the organization. AFCI strives to provide advocacy, connectivity and education necessary for film commissions and businesses in the screen sector to foster economic growth, promote infrastructure development, and provide essential tools for professional development in a fair, sustainable and socially diverse manner.