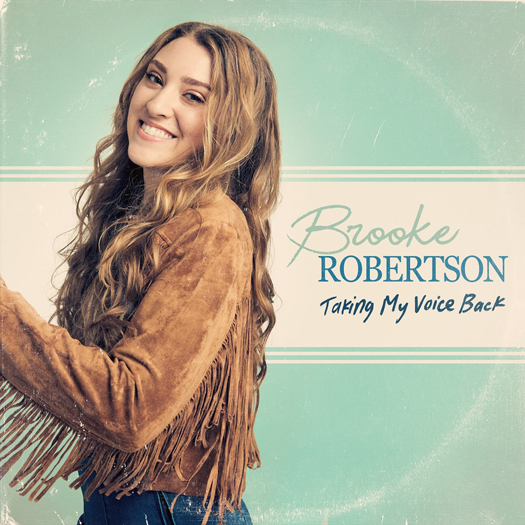 Brooke Robertson finds healing and freedom in 'Taking My Voice Back'

“Taking My Voice Back,” the Burtonwood Records debut from Louisiana-based singer/songwriter Brooke Robertson, is set to release March 27. Produced by Jeremy Holderfield (Seventh Day Slumber, Nathan Sheridan), the 11-song set – all co-penned by Robertson – showcases buoyant, country-tinged pop anthems alongside poignant ballads, each song a testament to the hope, healing and joy Robertson is embracing along her journey.

The vulnerable, deeply personal title-cut and lead single stands as the album’s centerpiece and marks the first time Robertson has shared her story as a victim of childhood sexual abuse. Harboring her pain for years, writing the song proved a therapeutic process as Robertson was ultimately able to forgive her abuser.

“It was something I promised myself I would never talk about, and for 15 years I was numb to it,” she said of the abuse. “As I was writing the song, I felt in my heart that I needed to contact my abuser. I was able to tell that person I forgave them, and that God forgives and loves them, too. To be able to share Jesus with someone who hurt me was something I didn’t even know I needed. I thought all these years I was OK, but there was a deeper healing in store for me, and God knew that.”

“No matter what someone has been through, I hope ‘Taking My Voice Back’ can help them find healing through forgiveness,” she added. “There is power in forgiveness. I want people to find that freedom.”

Additional highlights of the project include album opener “Just Be You,” an upbeat anthem of encouragement to live authentically; “Purpose For The Pain,” inspired by a health crisis Robertson’s mother faced during her pregnancy with the artist; “Why Are You Waiting,” a duet with Dove Award-winning Building 429 frontman Jason Roy; and the tender closing track, “See You Here,” a tribute to Robertson’s grandmother, featuring her Burtonwood Records labelmate and childhood friend, Nathan Sheridan.

“I hope this album will help others feel empowered and encouraged to let hurt go, extend forgiveness and fully embrace who God created them to be,” Robertson said. “I want people to find freedom from their hurt and pain and walk into the calling God has for their lives.”