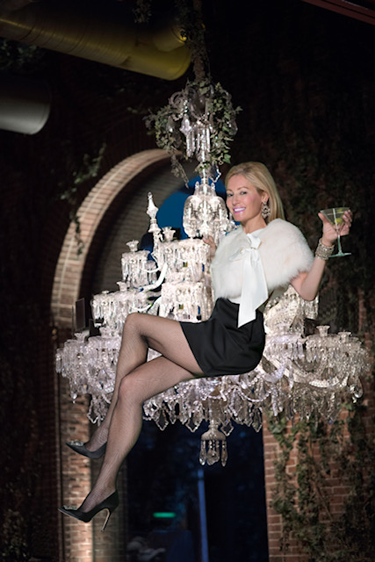 Sophia Smith in "Swinging From the Chandeliers" (Image by Maurizio Bacci/Bibaldi Studio, courtesy of the author)

Book signing for Sophia Smith's 'Swinging From the Chandeliers'

Lewiston author, actor and community advocate Sophia Smith will participate in a book-signing event inside the Lewiston Public Library, 305 S. Eighth St. She will autograph copies of “Swinging From the Chandeliers: Stories of a global journey of fun, frolic and fabulousness” from 10 a.m. until 1 p.m. Saturday, Feb. 1.

Smith published her first book last November. It immediately became a high-ranker on Amazon’s short reads list. In the book, readers are invited to take a trip around the world with Smith as she regales them with humorous tales of her journeys – with all the laughter, copious fun, brushes with death, and wonderment included. Meet Sting, Gianni Agnelli, Betty, Red, Alice, The Scotsman, The Wandering Teeth, and a villain at the Hotel Costes in Paris, among other characters. Hang on for the ride!

“Swinging from the Chandeliers” is available on Amazon.com, locally at The Book Corner in Niagara Falls, Talking Leaves on Elmwood, and via Apple books, Barnes and Noble, Baker & Taylor, Tolino, Kobo, Scribd, OverDrive and 24 Symbols.

Smith is a Lewiston native, a graduate of Lewiston-Porter High School and Buffalo State College (with a B.A. in theater arts). She has completed postgraduate studies in writing at the University of Toronto, New York Film Academy and NYU Tisch School of the Arts.

After completing college, Smith moved to New York City to pursue her acting and artistic dreams. In the Big Apple, she modeled, appeared in several commercials, television shows and independent films. Smith returned to Western New York in 1997, and now splits time between the two locations.

A Sentinel contributor, Smith is currently working on her second book of short stories, which is slated to debut this summer.

Books will be available for cash purchase at the signing event.