In its first meeting of 2020, the Grand Island Town Board issued proclamations to two cornerstones of the town court.

The board presented proclamations to both Town Justice Sybil Kennedy and her chief clerk of the court Maria Burns for their service to the town and its judicial system.

Burns, the chief clerk of the court, retired Jan. 3, after serving 32 years. She most recently served justices Kennedy and Mark Frentzel.

“This an amazing proclamation. I just want to thank you all,” Burns said in accepting the proclamation from the board. “It was a pleasure and my honor to serve the Grand Island Town Court and the Town of Grand Island for 32 years.”

She thanked the judges she worked with as well.

“I want to thank Judge Sybil E. Kennedy for hiring me in 1987 and allowing me to be her court clerk for 32 years,” she said.

In making the proclamation for Kennedy, Town Supervisor John Whitney noted that in 1970, Kennedy “was asked to help out for a few weeks in the Grand Island Town Court, and she went on to hold the position of chief clerk of the court for over 30 years.”

Kennedy was an expert in her field and lecturer all across the state, the proclamation noted.

In 2000, Kennedy was the first woman to be elected to the town justice position on Grand Island, and when she retired at the end of 2019 she had served the town a total of 50 years.

Whitney said Kennedy’s “mission was to help those addicted and those who suffer from domestic violence. She instituted a first time, last time problem-solving program in hope of early intervention.”

The board resolved to recognize Kennedy “for her remarkable career and service to the Town of Grand Island that breached barriers for other women to follow and that established standards and guidelines for training judges and clerks, and will be a legacy that will long last beyond her retirement as judge.”

Kennedy accepted the proclamation and said it didn’t seem like 50 years on the job.

“When you enjoy what you’re doing, time goes fast,” Kennedy said. “It’s been a pleasure. It’s been an honor. I enjoyed all of the people I worked with over the years, and I wish everybody good luck in their jobs.” 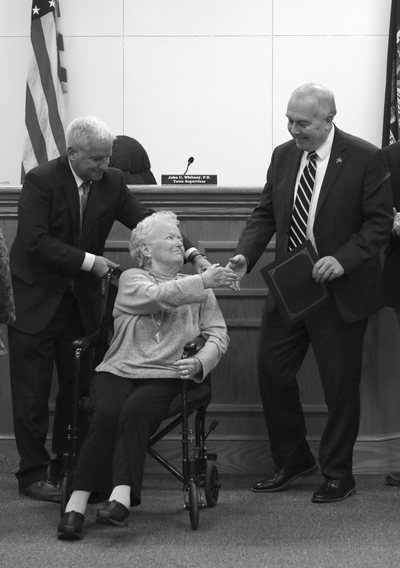 Two retiring members of the town court system received proclamations from the government. Above, Sybil Kennedy accepts a town proclamation from Town Supervisor John Whitney at Monday’s Town Board meeting. Below, Maria Burns thanks the board as she accepts a proclamation. Kennedy and Burns retired recently after a combined 80-plus years of service to the town. (Photos by Larry Austin) 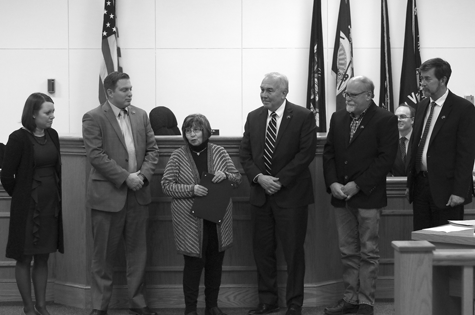