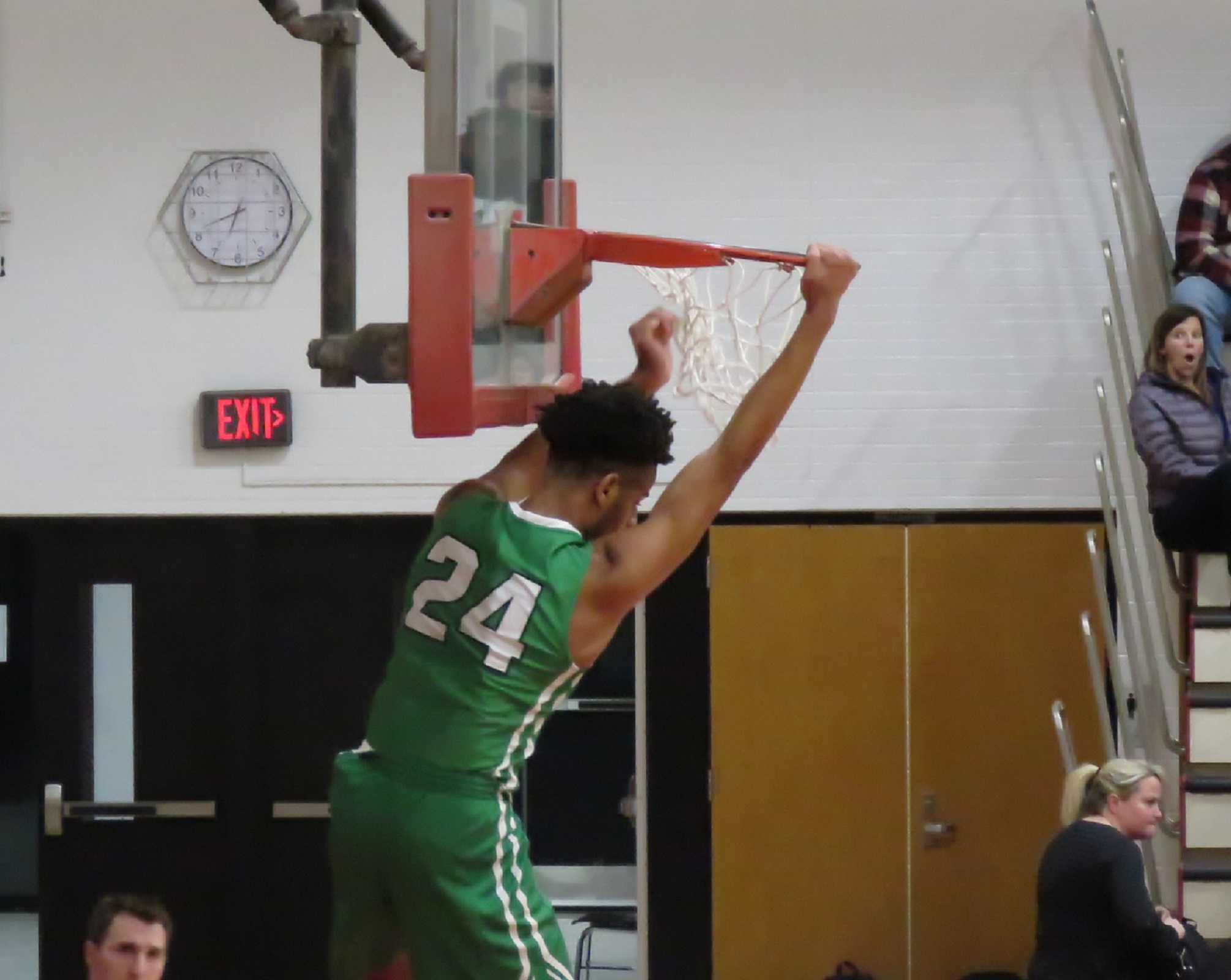 Traveling on the road to play a basketball game in a hostile environment is no easy task. The Lewiston-Porter Lancers felt the affects of playing in Niagara-Wheatfield’s gym Tuesday night, but as good teams do, the Lancers were able to overcome an early stumble.

Lew-Port defeated the Niagara-Wheatfield Falcons, 80-51, Tuesday, in a game that was close for the first 16 to 17 minutes.

In the first quarter, N-W sophomore TJ Robinson went toe-to-toe with Lancers sophomore sensation Roddy Gayle. The two posted big numbers in the opening frame, but it was Robinson who had the upper hand to start. The duo went back and forth trading 3-pointers twice.

With the score tied at 13, Robinson nailed his fourth trey of the quarter to begin a 9-0 run to close the quarter. Robinson’s 14 first-quarter points catapulted Wheatfield to a 22-13 lead.

Lew-Port began its journey back in the second quarter, as Gayle notched the first eight Lancers points of the frame.

In addition, quality defense from junior Mehki Starks and the Lancers held the Falcons to seven second-quarter points. Gayle added 13 points in the frame and Lew-Port took a 34-29 lead into the locker room at halftime.

The game was still in proximity for the Falcons, but the Lancers kept its foot on the gas following a 21-7 second quarter.

Gayle, Starks and freshman point guard Jalen Duff helped the Lancers start a 14-0 run before the Falcons finally scored in the third quarter. The run quickly put L-P ahead, 48-29.

The run was a big one for Duff, who didn’t score in the first half. The freshman made his mark on the third frame, chipping in 13 points. Additionally, Starks added several steals and nine points.

Midway through the fourth quarter, with the Lancers up big, Gayle drove to the hole, took a hit and sank a layup. After completing the and-one opportunity at the free throw line, Gayle exited with a game-high 37 points.

As both teams’ reserves came in to close the contest, the Lancers (5-3) walked away victorious, 80-51.

In addition to Gayle’s stellar offensive feats, Starks added 16 points and Duff had 14.

For the Falcons (3-6), Robinson had a team-high 23 points, including five 3-pointers. Freshman Alexander Fletcher added 8, while Ben Salomon chipped in 5.

For Niagara-Wheatfield coach Erik O’Bryan, the game was a tale of two halves.

O’Bryan added that it’s very tough to stop Gayle, who recently eclipsed 1,000 career points, and he said he felt the Falcons contained the Lancers’ role guys for most of the game until the third quarter.

As for Lancers coach Matt Bradshaw, when the team was down nine points after the first quarter, the message in the huddle was simple.

“Just wake up,” Bradshaw said. “I mean, they scored 22 in the first quarter. We go as our effort goes. Everyone is going to give us their ‘A’ game, and if we don’t do the same, then we’re in trouble.”

The coach added that the team was able to create turnovers after the first quarter and on the team’s 14-0 run in the third quarter, which helped “get the tempo going.”

For the Falcons, Robinson received praise from not just O’Bryan, but also Bradshaw for how tough he played.

Bradshaw added, “Shoutout to TJ, man. To start off the game, he was going against possibly the best player in Western New York in Roddy and that didn’t faze him. He wasn’t timid at all and went right at him. … I was impressed with TJ.”

When the Lancers show up on the court for a game, a vast amount of attention goes towards Gayle, but Bradshaw said the team can’t rely just on the sophomore and, Tuesday night, guys like Starks and Duff helped the team.

“It’s a team game and we can’t always rely on Roddy. Mehki got steals that turned into layups and once we were running and got a good vibe, Jalen was smooth and not hesitating to shoot it. Our motto is our effort. When we play with it, we’re good, but when we play without it, we’re average,” Bradshaw said.

Moving forward, O’Bryan said he’s trying to stay positive in his youth’s development, as he starts a freshman point guard, in addition to a sophomore and even has an eighth grader playing critical minutes.

Bradshaw said he was happy his team came back and picked up the effort, but the Lancers can’t start games like it did Tuesday night.

The Lancers next contest is at 6:30 p.m. Friday, Jan. 10, at Kenmore West, while Niagara-Wheatfield’s is the same time and date at home versus Kenmore East.