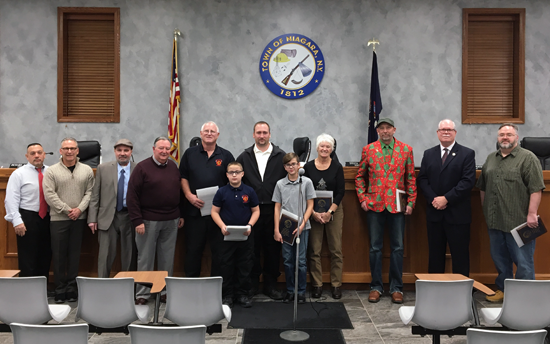 After a recent Town of Niagara meeting, Supervisor Wallace announced, “We have these end-of-the-year awards. We want our residents and our citizens – people in our town – and also our employees, to know that we notice when you do something that we feel is above and beyond.”

“We had quite a bit of problems earlier this year, during the summer especially, with graffiti and tagging several things,” Wallace said. “A number of people, some of the Niagara Active Hose Fire Co., as well as some regular citizens, saying, ‘Enough is enough!’ and ‘We’re going to take this in our own hands,’ because we certainly couldn’t do it, because the overpass where they were tagging was actually CSX Railroad property.”

“We have some employees we want to give an award to,” Wallace said. “First, we’ll start with Police Chief (James) Suitor who does a lot more for the town. He’s the internet expert; he’s the electrical expert. ... The other thing he does is he scours the United States of America and finds all this free stuff for us.”

For Suitor and other employees, the Extra Mile awards went to James Suitor, Jeff Vicki and Mark Herr.