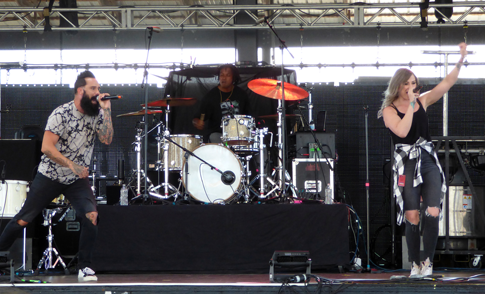 Skillet, a 12-times-Platinum rock band, is closing out 2019 inside multiple Billboard decade-end and year-end charts for their latest hit record, “Victorious” (Atlantic), top 10 active rock single "Legendary," as well as numerous past albums and tracks. Skillet has amassed 1 billion global streams over the past year alone.

Skillet appeared in both Billboard's top rock and top Christian albums of the 2010s with their two-times-Platinum album, “Awake” as the 40th top rock album, while Gold-certified projects “Unleashed” and “Rise” landed in the top Christian list.

Additionally, Skillet's three-times-Platinum track "Monster," two-times-Platinum "Hero," and Platinum "Feel Invincible" were once again amongst the top Christian streaming songs of 2019, with “Monster” making the top 5 for the sixth year in a row.

Skillet has wrapped up 2019 in a big way, as well. Their 20-city European tour saw them play to explosive crowds and sell out in nearly all of the cities, including London, Paris, Budapest, Milan, Zurich, Vienna and Berlin.

In addition to touring, radio and album sales success, Skillet debuted their first graphic novel, “EDEN: A Skillet Graphic Novel,” with Z2 Comics this fall. It quickly became the publisher’s best-selling book of all time.

This winter, Skillet will embark on a headline trek, dubbed the “Victorious Tour,” which kicks off Feb. 6 in Wichita, Kansas, and runs through March 14 in Norfolk, Virginia. Joining Skillet for this tour will be From Ashes to New, and Ledger – the latter of which features Skillet drummer Jen Ledger.

Throughout the tour, Skillet is offering two VIP packages, including a Q&A experience with exclusive Skillet merchandise and a limited number of meet-and-greet experiences.