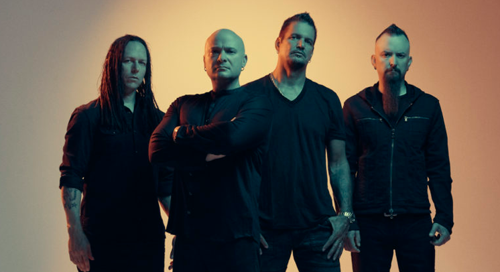 Disturbed debut new live video for 'Hold on to Memories'

Thursday morning, two-time Grammy-nominated and multi-Platinum band Disturbed shared their live video for “Hold on to Memories.” The video, directed by Rafa Alcantara, is both a remembrance of those who are no longer with us, as well as a celebration of their life and the light they brought to those closest to them.

The video and song’s message is a universal one: As long as you keep someone’s memory with you, a piece of them is still alive. The message is also a timely one, with many taking stock of the past year and decade. Watch the live video for “Hold on to Memories” here.

Additionally, the band launched an interactive video creator where fans can upload up to eight photos of their favorite memories to create a video montage backed by "Hold on to Memories." Fans can access this feature on Disturbed’s website here.

The live video for “Hold on to Memories” captures a moment during Disturbed’s live show where the band performs the song alongside a video collage of their favorite memories, with photos and videos of their friends and families, both here and gone. During this part of each show, lead vocalist David Draiman asks the crowd to actively create these memories.

“The people who have left us are never completely gone,” he said. “They stay in our memory, and I encourage each and every one of you to live everyday of your lives like it’s the last day of your life, making memories that last forever with the people you care about and love. Shine your light on this world everyone. Make memories that will last forever and cut through the darkness.”

The band will also release an official music video for the song in the new year, directed by Matt Mahurin, who has previously directed their “Sound of Silence” music video.

Disturbed have continued their record-breaking streak at rock radio and have claimed the title of 2019’s Most Played Artists in the active rock format. Additionally, the band recently
earned its seventh consecutive No. 1 on the Mediabase active rock chart and Billboard’s mainstream rock songs chart with new single “No More,” an achievement unmatched by any artist in history.

Disturbed have earned 10 No. 1 singles on the chart, including “A Reason To Fight,” the track that initially broke the record earlier this year. “No More” is the third single from the band’s latest album, “Evolution” (Reprise Records), which debuted at No. 1 on the top rock albums chart.

Disturbed two confirmed U.S. dates in May of 2020, followed by a tour of Europe in June, including shows in Germany, Switzerland and the U.K. More dates will be announced by the band in the new year. See a full list of dates here.

Since its formation in 1996, the band has sold 16 million albums globally and scored 12 No. 1 singles at active rock radio. Their quadruple-Platinum 2000 debut, “The Sickness,” formally announced the band’s arrival as hard rock leaders, with that status solidified by subsequent Grammy Award nominations as well as Gold-, Platinum- and double-Platinum-certified records, as well as countless sold-out shows around the globe.