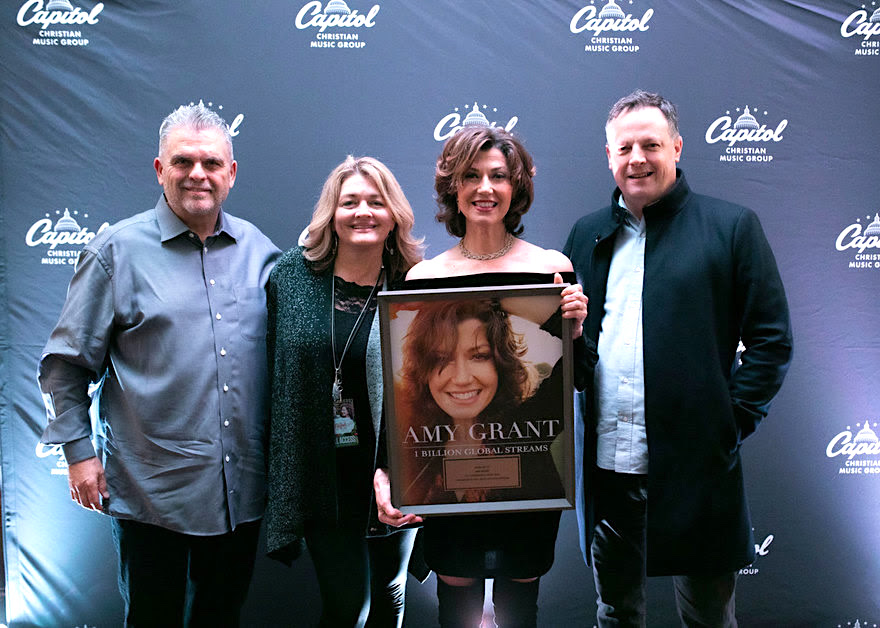 Monday night, just minutes before she was to take the stage for “Christmas at the Ryman,” the 12-night, annual sold-out residency with husband Vince Gill, multi-Platinum and six-time -Grammy winner Amy Grant was surprised by her label, Capitol Christian Music Group (CCMG), with an award for 1 billion global streams.

With a career that spans more than 40 years, three multi-Platinum albums, six Platinum albums and four Gold albums, Grant’s total career album sales have exceeded 30 million – all before streams – which now continue to give her career even more longevity as a new decade begins.

Speaking to Grant's undeniable impact on the music industry, CCMG Chairman and CEO Peter York said, "We are so grateful to Amy for her heart and the music she's gifted to the world over the years. Her music continues to have significant impact with listeners, and we’re thrilled to see it reach new fans every year. We are honored to celebrate these 1 billion streams and thank all our streaming partners, which will continue to keep her music vibrant into the next decade and beyond."

For the first time ever this fall, Grant  released her popular Christmas projects in a limited-edition vinyl box set, which York also noted will be completely sold-out before Christmas. The one-of-a-kind set features the multi-Platinum “Home for Christmas,” as well as two other classic Grant Christmas projects: “A Christmas Album” and “A Christmas to Remember.” A special and nostalgic way to celebrate the projects that have made Grant synonymous with Christmas, the box set also includes a bonus 7-inch vinyl featuring two rare tracks – a cover of “Merry Christmas Darling” and “Let the Season Take Wing” – only available in the vinyl box. The set also includes handwritten lyrics of fan favorite “Breath of Heaven (Mary’s Song)."

As one of the top-selling Christmas albums of all time, Grant's classic, “Home for Christmas,” is also available for the first time ever on vinyl. Originally released only on CD and cassette in 1992, the project features many of the biggest Christmas classics from Grant's four decades of making Christmas music, and something her fans have been clamoring for on vinyl for years.

Grant recently reunited with Michael W. Smith to co-bill their popular Christmas tour where they were joined by special guest Marc Martel. They incorporated a full symphony orchestra at each performance. The tour was presented by Balsam Hill.

Grant and Gill's “Christmas at the Ryman” 12-date holiday concert run kicked off Dec. 11 and closes Dec. 23. This year’s Ryman residency offered matinee times of the couple's holiday show on Dec. 22 and 23.

Grant's career spans more than 40 years and stretches from her roots in gospel into becoming an iconic pop star, songwriter, television personality and philanthropist. Her chart success has been consistent throughout her career with six No. 1 hits, 10 Top 40 pop singles, 17 Top 40 adult contemporary tracks and multiple contemporary Christian chart-toppers.

In addition to her six Grammys, Grant has earned 26 Dove Awards (including four Artist of the Year Awards) and has been awarded a star on the Hollywood Walk of Fame and the Music City Walk of Fame.

Conventional wisdom has it that Grant put contemporary Christian music on the map, becoming the first CCM artist to have a Platinum record, the first to hit No. 1 on the pop charts, and the first to perform at the Grammy Awards ceremony. With that, her legacy as one of the most influential artists of the past four decades is assured.