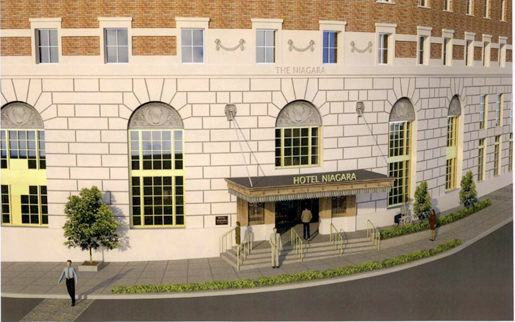 The Hotel Niagara is the oldest standing hotel in Niagara Falls and retains much of the architectural integrity that once made it an iconic piece of the city’s skyline. The approximately $42 million project will transform the property into a full-service, 160-room "upper-upscale" hotel with restaurants, lounges and banquet facilities. USAN, an Empire State Development subsidiary, has a development agreement with Brine Wells Development LLC for the restoration. Brine Wells will secure state/federal historic preservation tax credits worth a projected $10.6 million for the project, making it the largest historic rehabilitation project ever in the City of Niagara Falls. The hotel is expected to reopen in 2021. Renderings are available here.

"The rebirth of the Hotel Niagara is part of our continuing efforts to transform Niagara Falls, create jobs, and draw more visitors to Western New York," said Lt. Gov. Kathy Hochul, who spoke at the event. "Through strategic investment, we are bringing new economic activity to the city while at the same time restoring a historic landmark. This is an important day for the future of Niagara Falls."

"The Hotel Niagara is a true gem in Niagara Falls and Brine Wells is thrilled to finally begin its restoration," said Brine Wells Development Managing Member Ed Riley. "This historic property deserves to be brought back to life and we intend to restore it, so it remains an iconic property for centuries to come. I thank Gov. Cuomo, USAN and the City of Niagara Falls for their commitment to this project and working with Brine Wells to get this restoration project off the ground."

"It was not so long ago that a project of this magnitude in our downtown corridor would have been unimaginable," said City of Niagara Falls Mayor Paul Dyster. "It is because of Gov. Cuomo’s leadership that projects like the historic renovation of one of our city’s most iconic properties are not only possible, but taking shape before our very eyes. Thanks to our state partners and Brine Wells Development, the Hotel Niagara will once again stand as a symbol of prosperity in our city and raise the bar for the hospitality and tourism industry for generations to come."

Gov. Andrew M. Cuomo announced in July 2017 that Brine Wells was designated as "preferred developer" for the restoration of the Hotel Niagara on Centennial Circle in downtown Niagara Falls. Since that time, the developer has been completing its due diligence, finishing design work, securing approvals, structuring financing and negotiating the development agreement with USAN.

The Hotel Niagara property was acquired by USAN in July 2016 with $4.4 million in Buffalo Billion funds. Brine Wells Development’s plans will restore the lobby and related spaces to a quality level consistent with the property’s original design and restore the main ballroom to its original 1920s condition. An on-site, full-service restaurant will focus on local foods and New York wines, to be complimented by a lounge also equipped with sidewalk patio facilities. Other amenities include private meeting and dining rooms, a gift shop and exercise facilities. A new roof top terrace lounge is also part of the project.

Brine Wells Development has worked with the New York State Historic Preservation Office and the National Park Service and has secured his approvals for a design that will fully maintain the historic integrity of the building.

ESD Acting Commissioner and President and CEO-designate Eric Gertler said, "Niagara Falls is witnessing a transformation thanks to Gov. Cuomo and his commitment to the city and its tourism-based economy. As we break ground to return the Hotel Niagara to its former glory, we are making significant progress to ensure the region remains a world-class tourist destination."

New York State Parks, Recreation and Historic Preservation Commissioner Erik Kulleseid said, "With 9 million visitors a year coming to Niagara Falls, the ability to offer a variety of lodging options is vital. We know that many travelers appreciate the option of staying in a historic hotel, so I thank Gov. Cuomo for providing assistance for the Hotel Niagara and adding to the portfolio of special places to stay in Niagara Falls."

A press release from ESD stated, “The first rehabilitation of a historic hotel in the City of Niagara Falls, the project will restore the building’s finishes, architectural details and design elements to the original intent and offer its guests quality service. Built in 1924, the 12-story Hotel Niagara was among the city’s finest lodging and banquet establishments and is listed on the National Register of Historic Places. Although it has long held a prominent spot in the downtown Niagara Falls skyline, decades of deferred maintenance, neglect and multiple changes in ownership resulted in the property’s degradation and eventual vacancy. The Hotel Niagara’s final iteration, a Travelodge, closed in 2007.”

Brine Wells Development previously completed a similar transformation of the 95-year-old Hotel Syracuse. That $75 million project resulted in the Marriott Syracuse, a complete rehabilitation into a full-service, four-diamond facility with 261 guestrooms, two historic ballrooms, an IACC-certified conference space, six food and beverage venues and a completely restored lobby. That property opened in August 2016.

Assemblyman Angelo Morinello said, "Many memories have been made at the Hotel Niagara since it opened in the 1920s, and today, as its restoration begins, memories will continue to be made for years to come. I thank Gov. Cuomo, USAN and Brine Wells for their respect to this grand hotel’s history and dedication to seeing the Hotel Niagara restored to its proper use once again."

USAN, a subsidiary of ESD, is solely dedicated to the support and promotion of economic development initiatives in downtown Niagara Falls by leveraging private investment and encouraging growth and renewal of the tourism industry in the City of Niagara Falls. For more information, visit https://esd.ny.gov/usa-niagara-development-corporation-6. 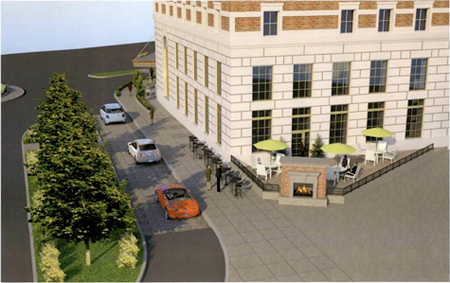