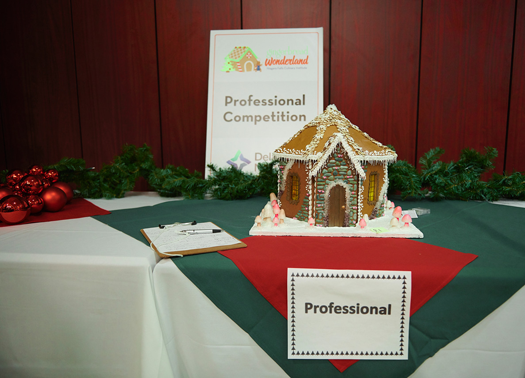 It was a “Gingerbread Wonderland” in the Niagara Culinary Institute this last weekend as gingerbread houses were on display, with ribbons attached, for the American Culinary Federation competition.

From the use of frosting to electric lights, the examples of tasty ingenuity were placed in the public’s eye from 5 p.m. on Friday till 4 p.m. Sunday, during the same schedule of other “Jingle Falls” events such as face painting, letters to Santa, and cookie decorating.

“Santa’s here all day and that’s always a huge draw and he’s got a line already. Any of the things like that, the entertainment is free,” said Sara Harvey, assistant director of public relations and event management for NCCC of “Jingle Falls.” “It’s just on the weekends. Fridays, it’s 5-8 p.m., Saturdays it’s 11-7 p.m. and Sundays we have hours noon to 4 p.m. and it goes on through Dec. 22.”

Harvey continued, “We have a few stations that are low cost. There’s a cookie-decorating station, kids get a cookie they can decorate. There’s face painting, and there’s also a holiday crafting.”

To get into some of fun, $2 tickets can be purchased. The free entertainment includes watching music acts on the main stage, posing for homemade photos at the station and visiting Santa in the “Gingerbread Wonderland.” Also, there’s wreath making, baking demos, story time and stockings crafting and temporary tattoos in Barnes & Noble. Kids can start on writing letters to Santa at the post office and watch a video on the making of the gingerbread houses. Crafts in Santa’s workshop, cookie decorating, and face painting are all one ticket each.

Harvey said that along with these festivities, live music would also be played in the Niagara Culinary Institute, including the Buffalo-Niagara Concert Band, which played Saturday.

Outside, the whole street was filled with heaters and places to pose for pictures. Also on Saturday, Chef John Matwijkow gave a demonstration of ice carving with a few of his students. 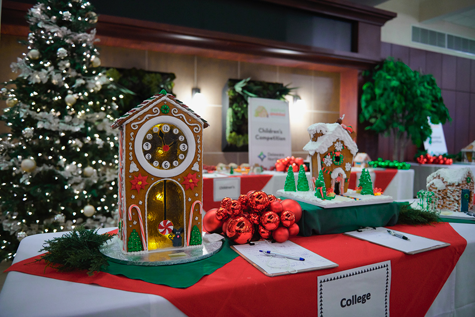 “We have a whole class about ice-sculpting here,” Harvey said. “That can be like a lucrative second career for some people who do these kinds of events.”

“Old Falls Street is very involved with trying to bring people to the community year-round, not just in the summer when there’s a lot of tourists here, but in the winter, and trying to cater to the local audience, as well,” she continued. “The Ping-Pong tables and the games are just something to keep people involved. They also have fire pits where you can roast marshmallows.”

This is the eighth “Gingerbread Wonderland” at the Niagara Culinary Institute, and it correlates with the rest of “Jingle Falls.” The process starts months before the events and, as can be imagined, it takes a lot of sugar and spice to build a life-size gingerbread house.

Harvey said the turnout depends a lot upon the weather. Having opened on Nov. 30, the first day was busy, but the next day was not as good.

“There were people waiting for me when I opened the doors today,” Harvey said. “Luckily, Santa arrived early and he walked around and greeted people. He’s the glue. Between him and seeing the giant gingerbread house, the other activities are a bit of a bonus.”

Harvey said the program is not looking to make any money.

“We have a budget and we kind of just break even. Basically, it’s just a way to be a good community partner and bring people here, so we’re not really making money just based on the ticket sales,” she said. “We do have some sponsors; Delaware North is very generous and they sponsor the cookie station. For all our sponsors, we put their logos on the gingerbread house.

“We try to keep the cost low, so it’s very family-friendly.”

Other sponsors include DoubleTree by Hilton, the Rotary Club of Niagara Falls, Covanta and Niagara Frontier Publications.

As for the competition, there are five categories the judges looked for Friday night when the awards were given out. The houses were also bid on throughout the weekend, so people could take home one of these culinary creations.

“There are some great ones from high school students, so maybe they’re destined to be baking and pastry arts students here someday!”

“There’s something for people of every age,” Harvey concluded. “Obviously Santa, and some of the crafts are geared toward the little children, but we have the Buffalo-Niagara Concert Band and grandparents and parents can come in and enjoy that. I think that everyone enjoys seeing their kids and their grandkids enjoying themselves, too.” 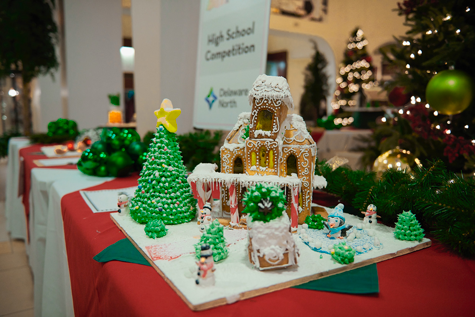