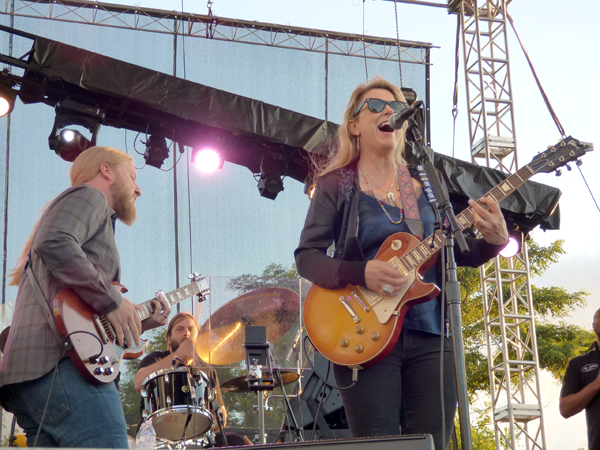 Tedeschi Trucks Band is shown performing at Artpark in 2018.

Tedeschi Trucks Band’s “Wheels of Soul Tour” returns to the Artpark Amphitheater on July 14, 2020, as part of the “Tuesdays in the Park presented by M&T Bank” series. Tedeschi Trucks Band will be joined by eight-piece soul band St. Paul and the Broken Bones plus singer-songwriter and multi-instrumentalist Gabe Dixon. Tickets go on sale at 10 a.m. Friday, Dec. 13.

Tedeschi Trucks Band carries a distinguished reputation as one of the premier live bands performing today. Led by Derek Trucks’ stinging fretwork and Susan Tedeschi’s emotive vocals and guitar talents, the 12-member-strong collective continues to expand musical boundaries in ways that only a rare caliber of musician can achieve. From uplifting soulful anthems, to bittersweet ballads and driving rock and roll, Tedeschi Trucks Band delivers a sound and message that taps tradition while also extending the edges of American music with a genre-defying collection that is all their own.

St. Paul & The Broken Bones formed in 2012 and released a debut album, “Half the City,” in 2014. 2016 follow-up “Sea of Noise” released to much acclaim. Those efforts helped place the band on the national scene, and members have worked hard to prove they are no mere retro-soul band.

Dixon is a Nashville-based singer-songwriter and instrumentalist. Since he first emerged in 1999, he has been penning honest and heartfelt tunes that continue to garner fans and crowds across the globe. Dixon’s songs have also been featured in major films such as “The Proposal” and TV shows such as “Nashville,” “Grey’s Anatomy,” “The Vampire Diaries” and “Parks and Recreation.”

Tickets for the 5:30 p.m. event are $57 front-of-stage (standing-room-only) or reserved seating; $37 for general admission bowl; and $19 for regular general admission. Prices include a Facility Fee; additional fees apply for online and phone orders. Ticket prices in all sections increase by $5 the week of the show (Sunday-Tuesday).