The good, the bad, and the O'Shea

Imagine this: You’re a brand-new college student. You’ve paid your tuition. You’ve paid your dues. You’ve completed your FAFSA. You’ve gone to summer orientation. Now, you find yourself dorming in O’Shea Hall. As you slip into bed, under your covers, you feel yourself sink into your mattress, eyes gradually closing. …

Then you’re denied of sleep.

There is ringing in your ears.

Not just ringing, but an alarm blasting a cacophony of noise, and a sensory overload ensuing as you’re roused out of bed, joined by your fellow pupils in shared confusion, anger, annoyance and indignance.

Not to mention that it’s the thick of autumn, and it is less than 35 degrees outside. You’re underdressed, and so are the many other hapless students who failed to expect the unexpected. Before you know it, you’re amongst a sea of your peers and total strangers alike, all joined together in this weird, bonding reality. Why? Because someone forgot to put water in their Easy-Mac, and now everyone who lives in O’Shea has to pay the price. 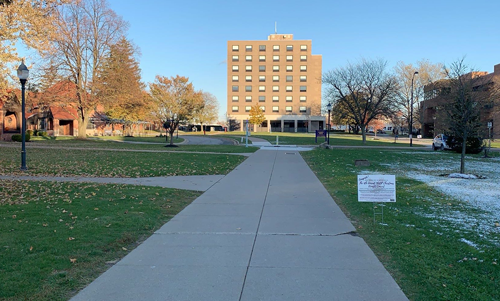 This kind of thing is a reality for the residents of Niagara University’s O’Shea Hall.

Granted, O’Shea isn’t all bad: It’s situated in a nice area of campus, and is very convenient in regard to getting to where you need to be. However, its drawbacks cannot be denied. The most glaring of which, depending on whom you ask, is the rampant fire alarms.

“Every time a fire alarm goes off, it’s because someone was being stupid,” said Miranda, an O’Shea resident. “We’re all adults. Y’all need to grow up, because I’m really sick of being inconvenienced by your childish actions. I have classes the next day, and just because y’all want to mess around, doesn’t mean other people don’t have stuff to do the next day.”

They’ve been so excessive that the actual number of alarms is disputed amongst O’Shea residents. In arbitrary asking of residents, numbers have ranged from 14 to 17, with few ever agreeing on the exact number. 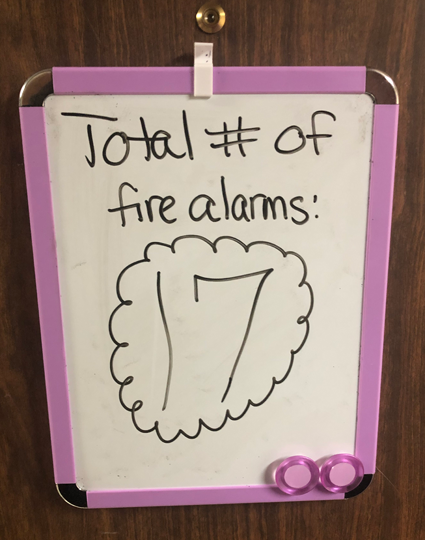 Granted, some alarms happen during classes and midday lunch grabs, so not every denizen has been present for every alarm. Still, the discrepancies are glaring.

Of course, with there just being numbers on a paper without any point of reference, things can’t be put into perspective as easily. Seton Hall, which is across the way from O’Shea, has only had around six or seven, less than half of the gargantuan amount set by O’Shea. No one has any clue exactly why O’Shea has so many more fire alarms under their belt, as it’s likely just a matter of the hall having more people who are likely to set it off.

The feelings of vexation don’t stop there.

“The frequency of the alarms desensitizes students to a feeling of urgency,” said Stacy, another O’Shea resident. “Due to the amount of alarms that go off during unneeded circumstances. This also prevents local fire departments from doing real tasks, and instead being distracted by false alarms. … Students now take them less seriously, and some even consider if there would be any repercussions for staying in their room, because it doesn’t seem as though many people notice or take account of how many people actually leave the building.”

Every time a fire alarm in O’Shea is triggered, a fire company is required to come inside the building and check the hallways and rooms for the hazard that caused it. There have been instances where there were multiple alarms in a single day, and even more across a week.

“Now not only are the students being inconvenienced, but the firefighters are also being taken away from their daily tasks,” said Austin, a volunteer firefighter from Buffalo. “We’re all volunteers; we’re doing stuff. We stop what we’re doing, go to the firehall, get our gear on, then come here.”

People who are trained to deal with emergencies are taken away from assisting others in need to come to O’Shea and check the halls, all to find that the catalyst for the alarm itself was a bowl being overheated in a microwave, or someone flat-ironing their hair too close to their smoke detector.

There are inherent problems that arise from a jarring interruption, such as barring students from accessing their classrooms and often getting in the way of plans, even preventing them entirely.

“Two alarms, actually. I had to be going somewhere,” Stacy continued. “I ended up being late to where I was going because of fire alarms.”

The sheer chaos associated with a surprise fire alarm has proven to be a nuisance, and something that needs to be fixed. The only problem is, you can’t exactly control dozens upon dozens of people per floor, let alone eight times over. Not to mention the fact that one of the fire alarms was caused by a fire hydrant being stolen, displacing the entirety of the building’s residents— at 6 a.m. The tired and annoyed students were then encouraged into going to the adjacent building’s lecture hall, where they waited for a half hour until the culprit fessed up.

This author reached out to Niagara University for comment, but has yet to receive a response.

These things cannot be accounted for completely, and there is no way of preventing this without a constant hawk-eye over the student body, which would likely prove more aggravating than the alarms themselves. However, the community advisers, more commonly referred to as CA’s, attempt to put a damper on the widespread nature of the alarms. 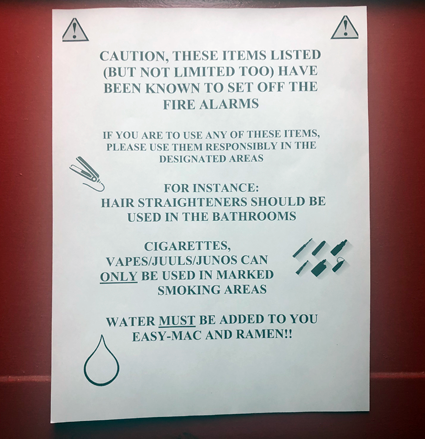 “We combat potential fire alarms by stressing to residents the importance of watching your food when you make it, spraying aerosols away from smoke detectors, and prohibiting the use of candles,” said Mekhyi, one of the CAs on duty in O’Shea. “We also produce bulletin boards, which list methods of fire prevention, and statistics regarding fires on college campuses, ways to prevent dorm fires, and creative ways of demonstrating these methods to residents. It’s all about communicating to residents the safety we desire within the dorms.”

Despite the many who loathe being ungently taken from bed and placed into the cold outdoors, these harsh occurrences have proven to contain their own silver linings, too. For some, like Joe, the unanticipated fire alarms have been more than just an annoyance, but a source of hilarity and connection.

“It’s pretty funny that they happen so frequently. … The alarms are so sensitive (in O’Shea). This one time, my friend had on a face mask and had to go outside, it was hilarious,” Joe said.

When thinking about fire alarms, the notion that they are awful, annoying, and utterly disruptive to the flow of an already stressful day to day life of a college student is one with merit, and not wrong. However, there is also the forgotten aspect of the fire alarms, with all these people gathered together, cold, and half-asleep: a sense of camaraderie amongst the student body when you stand together that much, waiting for the same thing. People become more of contemporaries in the literal sense, standing on the same concrete and grass. Together in their indignance, and more often than thought, friendship. They tend to actually bring people together in ways often ignored.