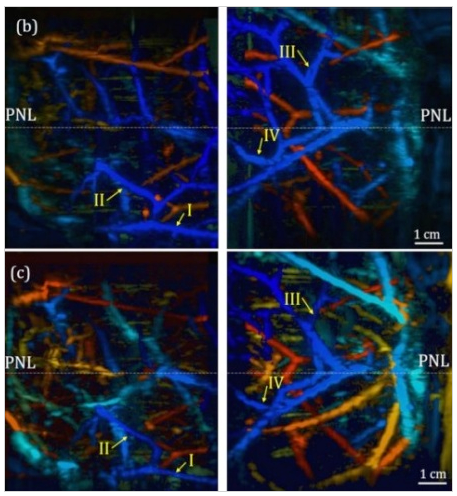 The images above show 3-D vasculature of breast tissue acquired by the dual scan mammoscope. The vessels in blue are closest to the breast surface, while the ones in red are located deeper in the tissue. (Photo credit: Jun Xia, University at Buffalo)

Developed by a UB-led research team, the system could improve early cancer detection in women with dense breast tissue

A new, portable breast imaging system under development in Buffalo has the potential to better identify breast cancer in women with dense breast tissue.

That is among the findings of a study published in the journal IEEE Transactions on Biomedical Engineering in August.

The study was led by University at Buffalo researchers in collaboration with Roswell Park Comprehensive Cancer Center and Windsong Radiology.

Xia, Ph.D., is an assistant professor in the department of biomedical engineering, a joint program of the School of Engineering and Applied Sciences and the Jacobs School of Medicine and Biomedical Sciences at UB.

Regular mammograms are the best tests doctors have to find breast cancer early, according to the Centers for Disease Control and Prevention. However, they are less effective for women with dense breast tissue.

There are alternatives methods in such cases, including MRI. But MRI tests are costly, they require intravenous contrast agents that can cause allergic reactions, and they’re not easily portable.

The dual scan mammoscope, or DSM, is similar to a mammogram, in that patients stand upright to have their breast compressed for imaging. Unlike mammograms, however, the DSM requires only mild compression of the breast, likely reducing the severity of pain that women can experience pain during the procedure.

Unlike a mammogram, the DSM is a radiation free-test. It uses a laser to illuminate breast tissue. In turn, this generates acoustic waves that are measured by ultrasound technology. The combination of lasers and ultrasound is an imaging technique called photoacoustic tomography.

While MRI requires a contrast agent, the DSM test uses hemoglobin, a protein in red blood cells that carries oxygen throughout the body. The technology Xia and his colleagues are developing features two simultaneous scans, one working from the bottom of the breast, while the other works from the top.

The team plans additional studies, including the imaging of more patients with different breast sizes and tumor characteristics, to ensure the DSM machine’s effectiveness.

The study was supported by grants from Susan G. Komen grant and UB’s Clinical and Translational Science Institute.