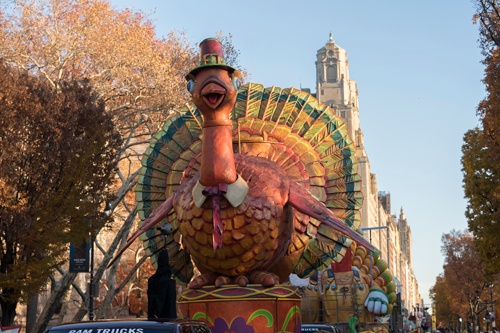 3-hour parade airs live at 9 a.m. (all time zones) with an encore presentation set for 2 p.m.

A spectacle like no other awaits millions as the 93rd annual Macy’s Thanksgiving Day Parade – one of the nation’s most cherished holiday traditions – once again kicks off the holiday season. Millions of families will tune in to watch the excitement unfold on Thursday, Nov. 28, as Savannah Guthrie, Hoda Kotb and Al Roker of NBC News’ “Today” host the broadcast from 9 a.m.-noon in all time zones. The special will include a special Celine Dion performance from her new album “Courage.”

To kick-off the revelry, a special must-see opening number featuring a who’s who of actors, singers, dancers and more, all joined by the cast and Muppets of Sesame Street, will start the Thanksgiving Day party with a smash.

Following the opener on 34th Street, Broadway’s best shows will take a star turn in front of Macy’s famed flagship with special performances from the casts of “Ain’t Too Proud – The Life and Times of The Temptations,” “Beetlejuice,” “Hadestown” and “Tina – The Tina Turner Musical.” In addition, the show-stopping Radio City Rockettes will bring their signature high-kicking magic to Herald Square.

Since November 1924, the magic of the holiday season has begun with the march of the Macy’s Parade as it enthralls the nation with its signature mix of whimsical elements and special performances. For the 93rd edition, the lineup will feature 16 giant character balloons; 40 novelty balloons, heritage balloons, balloonicles, balloonheads and trycaloons; 26 floats; 1,200 cheerleaders and dancers; more than 1,000 clowns; and 11 marching bands.

“We are thrilled to present the 93rd edition of the Macy’s Thanksgiving Day Parade to our viewers nationwide,” said Doug Vaughan, executive vice president, special programs, NBC Entertainment. “This iconic tradition will once again jump start the holiday season with a celebration led by an incredible lineup of performers, bands, floats, balloons and more.”

For the fourth year, Macy’s, along with NBCUniversal and Verizon, will give viewers an up close and personal second screen experience of the parade with a 360-degree livestream on Verizon's YouTube page. The stream will go live at 8:30 a.m. EST at www.youtube.com/verizon and will run through noon. With exclusive access to cameras along the entire parade route, online spectators will get a glimpse of the magic behind the scenes, as well as a preview of what’s to come as the parade marches down the streets of Manhattan. Additional information on the livestream will be announced soon.

New giant balloons joining the lineup this year include Astronaut Snoopy by Peanuts Worldwide, Green Eggs and Ham by Netflix, and SpongeBob SquarePants & Gary by Nickelodeon. In celebration of his 75th birthday, a heritage balloon and fan-favorite will return to the parade as Smokey Bear returns to the skies over Manhattan.

Since 2005, the Macy’s Parade has also been home to a collection of high-flying artworks created in collaboration with renowned contemporary artists, as part of a special series titled “Macy’s Blue Sky Gallery.” This year, for the eighth edition of the collection, the world’s most renowned female contemporary artist will take her iconic art to new heights as Yayoi Kusama joins the Macy’s Parade with her “Love Flies Up to the Sky” balloon creation. The balloon design was developed by the artist from face motifs that appear in her “My Eternal Soul” series of paintings — a body of work that she began in 2009. 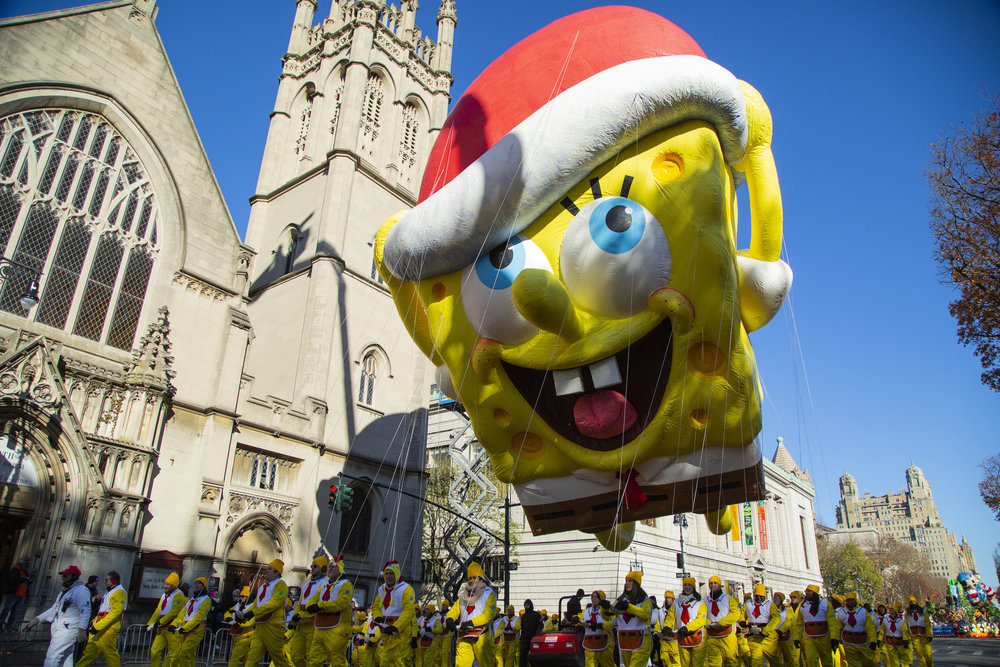 Vibrant and animated, the paintings embody Kusama’s innovative exploration of form and revolve around a tension between abstraction and figuration. The artist’s signature dots, which recur throughout her practice, also feature prominently in the Macy’s Parade balloon design.

Entertaining the crowds with their signature exuberance will be the parade’s signature large and specialty performance groups. Joining the lineup this year are the teen dancers and cheerleaders of Spirit of America Dance Stars and Spirit of America Cheer. These groups together feature more than 1,200 of the very best performers recruited from hometowns nationwide. Days before Thanksgiving, they will gather for the first time in New York City to rehearse their numbers as a group, ahead of their once-in-a-lifetime national spotlight.

All talent, performers, elements and information included are subject to change.

For an insider’s look at the holiday procession, fans nationwide can visit www.macys.com/parade for regular updates, including behind-the-scenes previews, special tours and interactive historical information. Fans can also follow @macys on various social networks and join the conversation using #MacysParade. For more information on the broadcast, visit http://www.nbc.com/macys-thanksgiving-day-parade and www.nbcumv.com. Follow @NBC on Facebook, Twitter and Instagram. 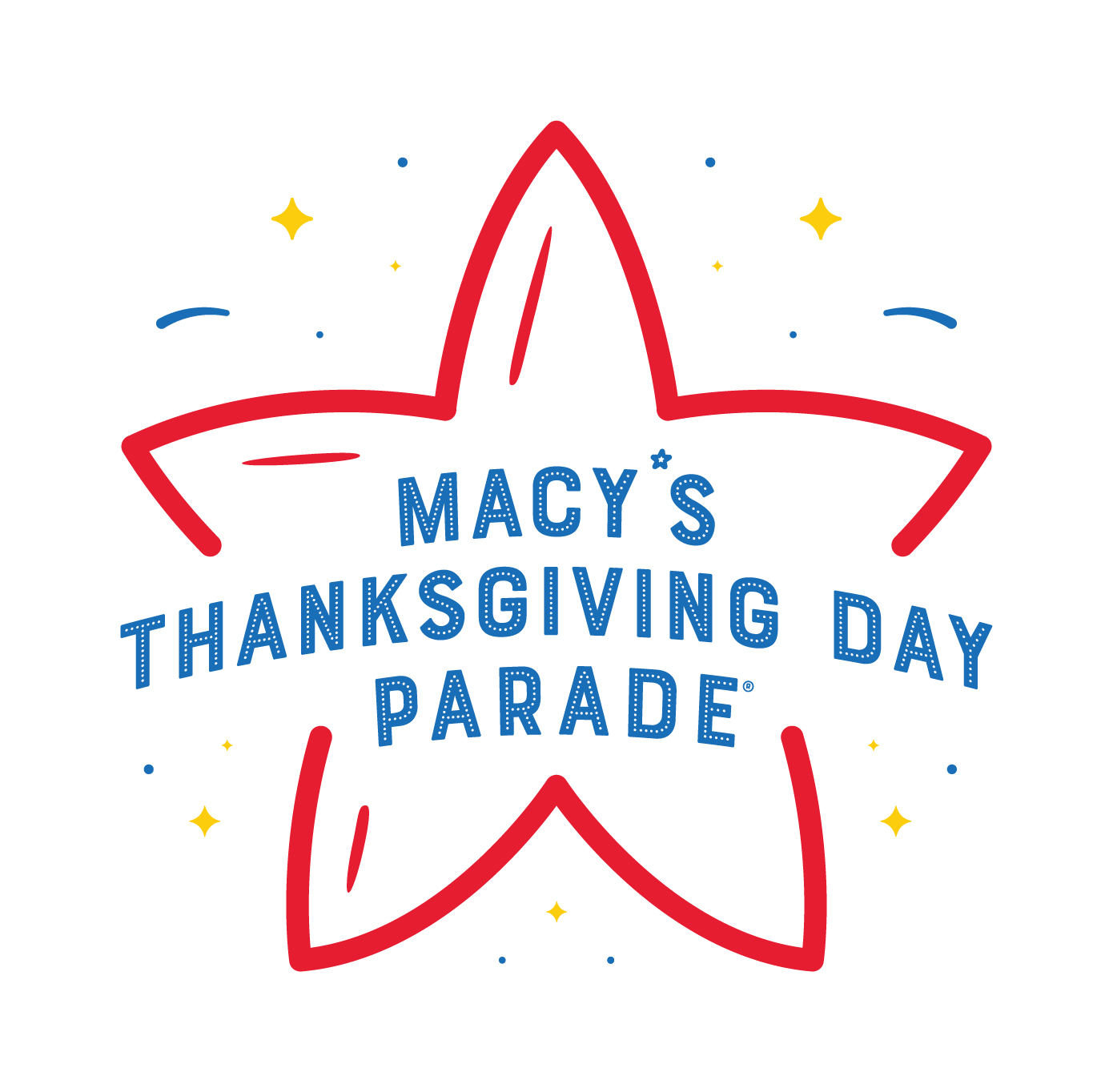