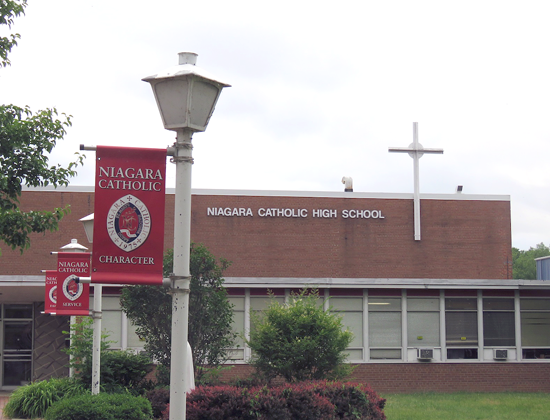 Niagara Catholic sold to The Chapel

The Catholic Diocese of Buffalo on Thursday announced the former Niagara Catholic building was sold. NC was shuttered in the summer of 2018 due to a lack of funding.

The sale of Niagara Catholic High School, which was on the market, was finalized today. The property, owned by the Diocese of Buffalo, is located at 540 66th St., in Niagara Falls, and includes the former St. Dominic Savio Middle School.

The property was purchased by The Chapel at CrossPoint for $750,000 and will be utilized to run their religious and community activities.

Niagara Catholic High School was established in 1975 in the traditions of the former St. Mary’s, Bishop Duffy and Madonna High Schools.

Proceeds from the sale of the property will be used to support Catholic education.

News broke this past summer of the Chapel’s interest in purchasing the building. The megachurch began holding Sunday service inside the Regal Cinemas movie theater on Builder’s Way road earlier this year.

In July, Jonathan Drake, campus pastor of The Chapel’s Niagara Falls satellite, told NFP, “We’re really excited about being able to have a visible, identifiable presence in Niagara Falls. It’s been on our hearts for a really long time to do that, and we’re just so excited that this became an option for us to explore. We can’t wait for this (property) to have a new purpose.”

He noted, “The good news is it’s in relatively good shape, as it was just used the previous school year, 2017-2018. But there would be some modifications that we would need to make so that it would be conducive for worship gatherings.”

Also in July, Niagara Catholic’s final board president, Judith Nolan Powell, said she was pleased the diocese was successful in finding a buyer for the property.

“It will be good to see the facility occupied again. I know that many of my fellow trustees and alumni share this sentiment,” she told NFP.

Following the sale, Drake said, “It’s time to renovate and make it suitable for what we do as our permanent building for church. We have music and a band. We’re a nondenominational Christian church, and every Sunday there’s music and singing and then a sermon. It’s a great time to connect with people and get to know each other.”

As for renovations, Drake said The Chapel will be “outfitting space” for kids and student areas.

“There’ll be space for 3-year-olds so they can run around,” he said. “And a place for middle-school students who will hear different music and learn about God in a way they can enjoy.

“Some parts of the building will take more work than others.”

As far as the current satellite location, Drake said, “The Regal Cinema local management has been amazing. He noted The Chapel will continue services at the Regal while renovating the former school. “Their GM is amazing. We’re not homeless; we’re going to take the time to make sure the building suits us.”

Drake said renovations will probably start with the New Year.